A founding member of the Latino Arts Movement, Hernandez was 'our unofficial poet laureate' 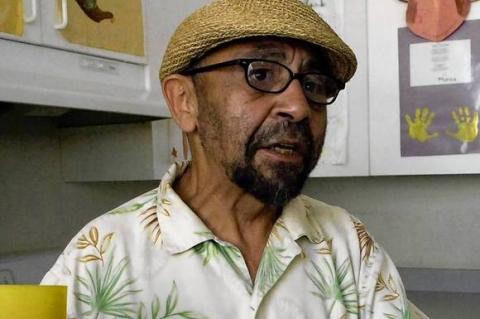 This is David Hernandez:

"I grew up here

"I know the streets like the back of a passenger's head on the subway train."

Yes, he did: Puerto Rican by birth, he was a Chicagoan by virtue of his passion, upbeat personality and the power of his poetry.

He knew our streets, the alleys and classrooms too; our nightclubs and libraries and the halls of power. He once appeared before more than 1 million people in Grant Park, reading a poem of his commissioned in honor of Chicago's sesquicentennial. But he could be found more frequently in public school or in such places as the Joliet Correctional Center, giving poetry workshops to kids or convicts.

"A great poet and terrific teacher, David was generous on every level," said Kevin Coval, the head of Young Chicago Authors. "He was a profound influence on my life and career."

The bad news came early Monday morning: Hernandez died of a heart attack. He was 66.

"He was like a big brother to me," said Dean Karabatsos, a childhood friend and longtime musical collaborator in their band, David Hernandez & Street Sounds. "I was always at my most comfortable and productive when I was with him. He was a sounding board, an advisor. It was hard to ever get down around David. He was the most optimistic person I have ever met."

In what was his last interview at the WBEZ-91.5 Navy Pier studios on Feb. 12, Hernandez said, "I started writing when I was 11 years old and I knew what I wanted to do ever since."

He was born in Cidra, Puerto Rico in 1946, soon coming to Chicago and settling with his family in the Wrigleyville neighborhood. He wrote poetry all through his years at Lake View High School and during his early jobs working in a warehouse and as a youth counselor and community organizer. His poetry was a celebration of what some refer to as "common people" and outsiders—the homeless, drug addicts—but it was also characterized by warm childhood memories, humor and a deep affection for this complex city.

As he once said, "Poetry belongs to everybody."

He also said, "Being a poet is an excuse to be a human being, to really experience life for what it is."

His first book, "Despertando" ("Waking Up," 1971), was also known as the first poetry collection by a Chicago Latino. Hernandez formed his band that same year with Karabatsos and it has provided an ongoing and ever-changing ensemble of ethnically diverse musicians offering a captivating combination of urban street poetry, jazz, folk and Afro-Latin elements.

"We just played a gig in Oak Park. It was terrific and David was really excited by things we had planned for the future," said Karabatsos.

Hernandez was a founding member of the Latino Arts Movement and helped organize countless classes and programs throughout the city and across the country. He was the first recipient of the Gwendolyn Brooks Outstanding Poet of Illinois Award and received many other honors and grants from dozens of organizations. Among his other collections of poetry are "Rooftop Piper," "Satin City Lullaby" and "The Urban Poems." He and Street Sounds have a number of recordings. At the time of his death he was running his Blueline Studio, a writing-performing-exhibition space in the Logan Square neighborhood.

It is a mystery to some why Hernandez never had a wider or higher profile. Many believe he deserved to be elevated to the city-chronicler status of Nelson Algren or Studs Terkel.

After he read his poetry at both the inauguration and the funeral of Harold Washington, the late Helen Doria, then program director at the Mayor's Office of Special Events, said, "[David Hernandez] is our unofficial poet laureate."

He is survived by his wife Batya, daughter Matea, sister Alma and brothers Samuel and Eliud. A memorial service is being planned and Karabatsos promises it will feature music from Street Sounds. It will also, surely, feature poetry.

Once again, here is David Hernandez:

"Hey Chi-Town, you are the people!

"Chicago, you are the people!"

David Hernandez was among the best of us.