Recovery in U.S. Is Lifting Profits, but Not Adding Jobs

With the Dow Jones industrial average flirting with a record high, the split between American workers and the companies that employ them is widening and could worsen in the next few months as federal budget cuts take hold. 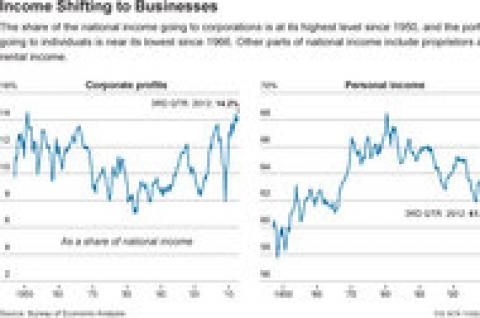 With the Dow Jones industrial average flirting with a record high, the split between American workers and the companies that employ them is widening and could worsen in the next few months as federal budget cuts take hold.

That gulf helps explain why stock markets are thriving even as the economy is barely growing and unemployment remains stubbornly high.

With millions still out of work, companies face little pressure to raise salaries, while productivity gains allow them to increase sales without adding workers.

"So far in this recovery, corporations have captured an unusually high share of the income gains," said Ethan Harris, co-head of global economics at Bank of America Merrill Lynch. "The U.S. corporate sector is in a lot better health than the overall economy. And until we get a full recovery in the labor market, this will persist."

The result has been a golden age for corporate profits, especially among multinational giants that are also benefiting from faster growth in emerging economies like China and India.

These factors, along with the Federal Reserve's efforts to keep interest rates ultralow and encourage investors to put more money into riskier assets, prompted traders to send the Dow past 14,000 to within 75 points of a record high last week.

While buoyant earnings are rewarded by investors and make American companies more competitive globally, they have not translated into additional jobs at home.

Other recent positive economic developments, like a healthier housing sector and growth in orders for machinery and some other durable goods, have also encouraged Wall Street but similarly failed to improve the employment picture. Unemployment, after steadily declining for three years, has been stuck at just below 8 percent since last September.

With $85 billion in automatic cuts taking effect between now and Sept. 30 as part of the so-called federal budget sequestration, some experts warn that economic growth will be reduced by at least half a percentage point. But although experts estimate that sequestration could cost the country about 700,000 jobs, Wall Street does not expect the cuts to substantially reduce corporate profits -- or seriously threaten the recent rally in the stock markets.

"It's minimal," said Savita Subramanian, head of United States equity and quantitative strategy at Bank of America Merrill Lynch. Over all, the sequester could reduce earnings at the biggest companies by just over 1 percent, she said, adding, "the market wants more austerity."

As a percentage of national income, corporate profits stood at 14.2 percent in the third quarter of 2012, the largest share at any time since 1950, while the portion of income that went to employees was 61.7 percent, near its lowest point since 1966. In recent years, the shift has accelerated during the slow recovery that followed the financial crisis and ensuing recession of 2008 and 2009, said Dean Maki, chief United States economist at Barclays.

Corporate earnings have risen at an annualized rate of 20.1 percent since the end of 2008, he said, but disposable income inched ahead by 1.4 percent annually over the same period, after adjusting for inflation.

"There hasn't been a period in the last 50 years where these trends have been so pronounced," Mr. Maki said.

At the individual corporate level, though, the budget sequestration could result in large job cuts as companies move to protect their bottom lines, said Louis R. Chenevert, the chief executive of United Technologies. Depending on how long the budget tightening lasts, the job cuts at his company could total anywhere from several hundred to several thousand, he said.

"If I don't have the business, at some point you've got to adjust the work force," he said. "You always try to find solutions, but you get to a point where it's inevitable."

The path charted by United Technologies, an industrial giant based in Hartford that is one of 30 companies in the Dow, underscores why corporate profits and share prices continue to rise in a lackluster economy and a stagnant job market. Simply put, United Technologies does not need as many workers as it once did to churn out higher sales and profits.

"Right now, C.E.O.'s are saying, 'I don't really need to hire because of the productivity gains of the last few years,' " said Robert E. Moritz, chairman of the accounting giant PricewaterhouseCoopers.

The relentless focus on maintaining margins continues, even though profit and revenue have never been higher; four days after the company's shares soared past $90 to a record high last month, United Technologies confirmed it would eliminate an additional 3,000 workers this year, on top of 4,000 let go in 2012 as part a broader restructuring effort.

"There's no doubt we will continue to drive productivity year after year," Mr. Chenevert said. "Ultimately, we compete globally."

When companies do hire, it is often overseas, where the growth is. Take 3M, another company among the Dow 30 that is trading at a record high.

Even as President Obama and Congress have battled over the budget in recent months and growth has slowed to a crawl in the United States, the economic picture has actually brightened overseas. Asia has rebounded and Europe stabilized, factors helping the kind of big companies that make up the Dow, said Julia Coronado, chief North American economist at BNP Paribas.

"You're investing in the global economy," she said, "and you're getting access to stronger growth abroad."

The Federal Reserve has also played a crucial role in propelling the stock market higher, economists and strategists say, even if that was not the intent of policy makers. The Fed has made reducing unemployment a top priority, but in practice its policy of keeping rates very low and buying up the safest assets to stimulate the economy means investors are willing to take on more risk in search of better returns, hence the buoyancy on Wall Street amid the austerity in Washington and gloom on Main Street.

Of the broader market's 13 percent rise in 2012, about half was a result of the Fed's actions, Mr. Harris of Bank of America Merrill Lynch estimates.

"The Federal Reserve has done a good job stimulating financial conditions and lifting the market," he said. "It's been less successful in stimulating job growth."