labor Is It Time For Just Cause?

Just cause” protection is helpful because one of the main reasons private sector workers shy away from organizing is their fear of being fired. 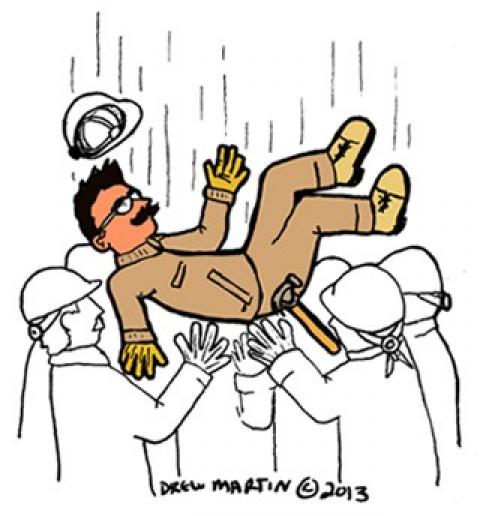 Is It Time For Just Cause?

by Rand Wilson and Steve Early

“It’s time for unions to stop being clever about excuses for why membership is declining and it’s time to figure out how to devise appeals to the workers out there. Workers should be looking to unions because of job insecurity and stagnant wages, but they are not.”

The annual release of bad news about union membership levels always provides labor-oriented academics with an opportunity to pontificate.  Professor Gary Chaison is one well-known chider of unions, for their various shortcomings and mistakes. Regularly quoted in The Times, he often dispenses tidbits of advice more critical than instructive.  However, in the case of his comment above, attention must be paid.

As the new open shop movement spreads across the Midwest, it has undermined public and private sector bargaining units in Wisconsin, Michigan, and Indiana. The impact on overall union membership is now apparent in the latest national statistics. As Times reporter Steven Greenhouse reported on Jan. 24, “the percentage of workers in unions fell to 11.3 percent last year” and “that brought unionization to its lowest level since 1916, when it was 11.2 percent.”  In the private sector, the loss of 400,000 members of all kinds reduced union density to 6.6 percent in 2012.[1] Another expert quoted in this story cited a public sector membership drop of 50,000 in Wisconsin alone.

Elsewhere we have suggested some strategies that unions, in new open shop environments, may need to adopt to maintain membership even where they have been stripped of collective bargaining rights and/or automatic dues check off.[2]

But the larger challenge issued by Chaison still needs to be met, and not just in states where organized labor is already on the defensive. Organized labor needs to go on the offensive, with a systematic campaign for new workplace protection that would address the widespread job insecurity cited by Chaison, and the erosion of job rights caused by de-unionization. As outlined below, this advocacy effort would increase the public appeal of unions and help lay the groundwork for a revival of collective bargaining as a tool for reversing long-term wage stagnation.

What legislative goal might inspire all workers—union and non-union alike?

Due process rights at work could be the answer. The United States is alone among industrialized countries in allowing at-will employees (i.e. most of the 88.7 % without a union contract) to be terminated for arbitrary reasons. As a result of past labor movement lobbying, Germany, France, Japan, Sweden, the United Kingdom, and South Africa all require employers to demonstrate they have “just cause” to dismiss non-probationary employees. [3]  Workers who believe they have been fired unfairly have the opportunity to contest their dismissals, and pursue money damages, before various types of industrial tribunals. In the U.S., such recourse is only available to public employees with civil service protection and/or union-represented workers with access to a negotiated grievance/arbitration procedure. [4]

The concept of just cause appeals to basic fairness, just as due process does in our criminal justice system.  At-will employees have no job security: they can be fired for a minor mistake, a disagreement with a supervisor, a biased performance evaluation, an individual complaint about pay or working conditions, or unapproved off-duty behavior–like supporting political causes or candidates disliked by the employer (an increasing election year concern at firms owned by proselytizing Republicans). Hundreds of thousands of workers are sent packing every year under such circumstances.

One state has passed such a law, curbing wrongful dismissals (and statutes in Puerto Rico and the Virgin Islands also prohibit termination without “good cause”).  Enacted in 1987, the Montana Wrongful Discharge from Employment Act applies to non-union non-probationary employees and prohibits discharges without good cause. It permits aggrieved workers to sue for up to four years worth of back pay, and provides a method for recovery of the necessary legal fees. Business opponents tried to kill the legislation by claiming it would scare business away. Twenty-six years later, Montana’s economic growth doesn’t seem to have suffered.[5]

State level campaigns for similar just cause legislation would serve two purposes, one narrower (because it’s related to union organizing) and the other broader, because all workers, pro- or anti-union would benefit. If just cause campaigns succeed, workers will gain another layer of legal protection in organizing drives. Montana’s unionization rate reflects its mix of industries and history of militant struggles, but it’s hard not to notice that the state, at 14.6 percent, has a much healthier percentage of union members than the national average. Neighboring Idaho has less than half the rate of unionized workers.

Just cause” protection is helpful because one of the main reasons private sector workers shy away from organizing is their fear of being fired.

As any labor organizer knows, National Labor Relations Board (NLRB) remedies for retaliatory dismissals are wholly insufficient. Discharge cases can drag on for years, before reinstatement is ordered, if the fired worker is fortunate enough to win. Interim earnings (including unemployment benefits) are deducted from back pay awards. This leaves anti-union employers with little financial incentive not to commit this most serious of unfair labor practices. In addition, few employers come right out and say they’re firing someone for being pro-union, during an organizing campaign. There’s always an official cover story–and too often the Labor Board accepts this employer pretext, rather than finding discriminatory intent and a connection to union activity.

Just cause statutes could give fired union supporters a second bite at the apple, in a different venue, just as many workers now win unemployment benefit cases based on the same set of facts that the NLRB manages to mishandle. Among the broader population of non-union workers who might challenge a dismissal unconnected to organizing, there would also be an important new union role: providing representation, advice, and information to help workers win their “just cause” cases. In workplaces where unions are trying to build employee organizations, like OUR Walmart–that function like unions but without formal recognition or bargaining rights–the ability to represent individual workers in termination proceedings would become an important selling point for signing up new members.

As longtime UE organizer and national executive board member Peter Knowlton points out:

“In most countries, except the US, if the boss wants to fire you, they can — but they have to pay you severance. The payment is normally based on a combination of pay and service time. When you make the employer pay severance for firing a worker (for reasons not having to do with discrimination based on age, race, gender, nationality, sexual orientation, disability, union activity or religion), then they will likely not do it so readily. For workers, knowing you’ll get severance eases the fear, somewhat, of speaking up to confront injustice. So there’s an economic “safeguard” for workers and a dis-incentive for employers. Plus, at least by law, it puts workers versus employers on a more equal footing.”

Winning “just cause” legislation will certainly not be easy. But building a movement on a scale similar to the push for the organizing-oriented Employee Free Choice Act, circa 2007 – 2009, would offer union activists an opportunity to champion a cause directly affecting far more workers.  Throughout the last century, organized labor led or assisted lots of uphill legislative fights for new protective legislation applying to the workplace. Some campaigns took many years but, state-by-state, labor won job injury insurance, minimum wage and overtime requirements, health and safety regulations, child labor laws, and prohibitions against employment discrimination. Every worker benefited from these regulatory initiatives, whether they had a union card or not. And whenever the labor movement was on the offensive fighting for all workers, union membership grew.

A “just cause” campaign could potentially engage working people at multiple levels. While agitating for state legislative action, local unions, central labor councils, and worker centers could promote the concept through community-based workers’ rights boards and public pressure. Community leaders and labor activists could declare certain areas “Just Cause Zones” and fight to enforce just cause as a new community standard—like living wage laws, but potentially much wider.  Unions and their allies could use the proposed legislation as a political “litmus test” for candidates. Workers fired unfairly could be enlisted to lobby and testify, along with their families, before state legislatures considering due process protection.

Even if campaigns for just cause do not succeed, millions of non-union workers will learn about the concept, especially if enactment is also pursued through popular referenda, where those are permitted under state law. By popularizing the just cause concept and raising expectations, more workers may respond by thinking, “If we can’t get this protection through legislation, let’s get it by forming a union!”

[3] See Clyde W. Summers, “Individual Protection Against Unjust Dismissal: Time for a Statute,” Virginia Law Review, Vol. 62, 1976.   Summers provides a thorough (but obviously outdated) overview of just cause laws in other countries.  He was a long-time champion for the adoption of a just cause statute in the U.S.

[4] For more on the application of the “just cause” standard in arbitration and other administrative law settings, see Robert Schwartz, Just Cause: A Union Guide To Winning Discipline Cases. The book lays out seven tests that are the guiding principles for discipline and discharge in most union workplaces. By popularizing and refining the “just cause” concept, Schwartz’s book could provide the basis for more workers (and communities) to begin thinking how it could be applied much more broadly if those same standards could apply to everyone.  More info go to: Work Rights Press.

[5] The most thorough analysis of employment impacts is, “The Costs of Wrongful-Discharge Laws,” by David H. Autor, John J. Donohue III, and Stewart J. Schwab, in the Review of Economics and Statistics, MIT, August 2, 2005 and online at http://economics.mit.edu/files/594.