Closing 50 of our neighborhood schools is outrageous and no society that claims to care anything about its children can sit back and allow this to happen to them. There is no way people of conscience will stand by and allow these people to shut down nearly a third of our school district without putting up a fight. Most of these campuses are in the Black community. Since 2001 88% of students impacted by CPS School Actions are African-American. And this is by design. 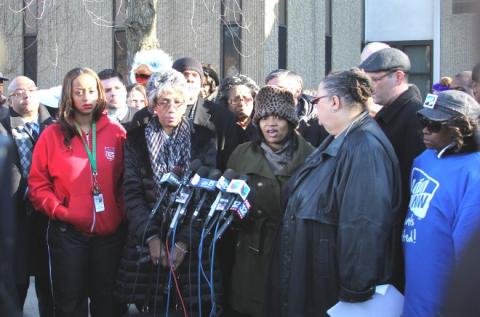 Mahalia Jackson Elementary second- grade teacher Tamara Faggins passionately condemns the CEO's recommended school closings., Photo by Nathan Goldbaum, CTU Communications.
Chicago Teachers Union President Karen Lewis said the following at a news conference regarding proposed school closings:
"We are standing here today in the beautiful Mahaila Jackson elementary school in our city's Auburn-Gresham neighborhood. This school was named for one of the greatest gospel singers in our nation's history, a woman who sang at Dr. Martin Luther King Jr.'s funeral, a woman who was instrumental in our Civil Rights struggle. Unfortunately, we are gathered here today not to talk about this pioneer or even about how this school does an outstanding job of providing a great learning community for some of our special needs students. We are standing here because this school, along with scores of others, has been targeted for closure by Mayor Rahm Emanuel's Chicago Public Schools district.

"Closing 50 of our neighborhood schools is outrageous and no society that claims to care anything about its children can sit back and allow this to happen to them. There is no way people of conscience will stand by and allow these people to shut down nearly a third of our school district without putting up a fight. Most of these campuses are in the Black community. Since 2001 88% of students impacted by CPS School Actions are African-American. And this is by design.
"Closing 50 schools is not grand or glorious. This is nothing to celebrate or marvel.

"These actions unnecessarily expose our students to gang violence, turf wars and peer-to-peer conflict. Some of our students have been seriously injured as a result of school closings. One died. Putting thousands of small children in harm's way is not laudatory.
"There is no safety plan. There is no transportation plan. The city has already raised CTA fares and now they expect parents to put their five-year-old on a crowded city bus in order for them to get to school, when they used to be able to walk to a school in their neighborhood. The way this is being done is an insult and it is disrespectful.
"The CTU is the bargaining unit for 30,000 of the district's employees SEIU and Unite HERE represent thousands more. Yet CPS did not feel obligated to brief any of us in advance of today's announcements. Instead, they called a few aldermen last night and then summoned principals this morning at 6:00 a.m. to spring the news on them. They had no consideration for their employees or our students-at all. They have no regard for our parents. They do not care about the children of their employees, many of whom also attend our public schools.
"I also find it extremely cowardly for the mayor's administration to announce these actions while he is vacationing out of town. They are also making this announcement days before people are headed into spring break. CPS has spun our entire district into utter chaos, a management model perfected on Clark Street where they are headquartered.

"This city cannot destroy that many schools at one time; and, we contend that no school should be closed in the city of Chicago. These actions will not only put our students' safety and academics careers at risk but also further destabilize our neighborhoods.

"This is why we intend to rally, united and strong, on Wednesday, March 27 to send a signal that we are sick and tired of being bullied and betrayed. Some of us are going to put our bodies on the line-because a threat to justice anywhere is a threat to justice everywhere. And when we declare the victory, some of us will sit back and sing the lines of one of Mahaila Jackson's songs-'How I Got Over.'
"Rahm Emanuel has become the `murder mayor.' He is murdering public services. Murdering our ability to maintain public sector jobs and now he has set his sights on our public schools. But we have news for him: We don't intend to die. This is not Detroit. We are the city of big shoulders and so we intend to put up a fight. We don't know if we can win, but if you don't fight, you will never win at all.

"The people of this city can no longer sit back and allow this mayor, his school board and his corporate cronies to run roughshod over democracy. They've turned their backs on affordable housing; turned their backs on job creation; and, now they're turning their backs on our students, their families and our schools. We are tired of playing their school reform games. But who are the winners and losers? Who made the rules? And what do they keep telling the losers to keep them playing their games?

"We do not have a utilization crisis. What we have is a credibility crisis. CPS continues to peddle half-truths, lies and misinformation in order to justify its campaign to wipe out our schools and carry out this corporate-driven school reform nonsense. CPS continues to peddle an `underutilization myth' and `billion dollar deficit lie' as justification for their actions. When research and the facts prove them wrong they simply reconfigure their talking points in order to further perpetrate their sham and to keep us playing their school reform games.
"For the past several weeks there has been a resounding cry against school actions from parents, students, educators and community stakeholders. The mayor and the CEO have ignored these petitions for justice at these hearings and apparently have not listened to single word that was said. Parents have been direct, loud and clear. Students have been loud and clear. Principals have been loud and clear. Teachers, paraprofessionals and school clinicians have been loud and clear: DO NOT CLOSE OUR SCHOOLS! GIVE US THE RESOURCES WE NEED, RIGHT NOW, TO SUPPORT OUR STUDENTS AND GIVE THEM THE EDUCATION THEY DESERVE.
"Enough with the lies and public deception: School closings will not save money and taxpayers will not see costs benefits in two years. Why? Because vibrant school communities will be quickly transformed into abandoned buildings, neighborhood eyesores and public safety hazards.
"This is the mayor's 25 percent solution. Yet, who will be held accountable when one of our students is harmed as a result of these policy decisions? And, who will be the ones to ensure justice is served?"