Obama in Israel: A Fine Speech, an Unfortunate Change & Not Much Hope

President Obama said a lot of the things that need to be said in his address to Israeli students last week. For that he is due credit. His description of the cause and aspirations of the Palestinian people was on target. The problem is that the overall effect of his latest trip to the Middle East represented a step backwards. 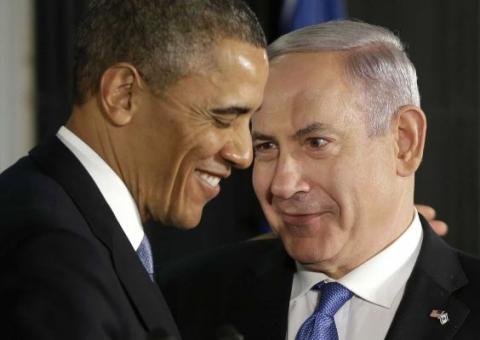 The continued expansion of Israeli settlements in the occupied West Bank remains the crux of the problem in historic Palestine and a U.S. policy of denying its centrality only contributes to the maintenance of the status quo.

Obama "appeared to move closer to the Israeli position on Thursday regarding resumption of long-stalled peace talks with the Palestinians, stopping short of insisting on a halt to Israel's settlement expansion as he had done early in his first term," Mark Landler wrote in the New York Times March 21 "Mr. Netanyahu could take solace that Mr. Obama drew closer to his position that the Palestinians should negotiate without first extracting a halt to all settlement activity," Landler wrote from Amman two days later.
"The promise that his secretary of state will expend time and energy to help Israelis and Palestinians to come closer together is the minimum, practically a mere courtesy," said the German the Center-right German newspaper Frankfurter Allgemeine Zeitung. "Otherwise, apart from a few unresolved doubts, Obama has completely adopted Netanyahu's course."
As Jonathan Tobin put it in the neo-conservative U.S. journal Commentary, Obama "said that settlements were not the core issue at the heart of the conflict and that if all the other factors dividing the two sides were resolved settlements would not prevent peace. Even more importantly, he emphasized that there ought to be no preconditions placed by either side before peace negotiations could be resumed."
Having apparently seen the light and concluded that a continuation of the status quo can lead to nothing good, New York Times columnist, Thomas Freidman, wrote last Sunday that the Palestinians "need to drop all their preconditions and enter negotiations" and Israel needs to "halt settlements." That's just plain silly. If the Palestinians drop their insistence that settlement expansion stop there will be no need for it to happen. If the Israelis halt the land grabbing there's no more precondition. As long as the Israeli colonial juggernaut rolls on there is no likelihood of a settlement, and a continuation of a "peace process," as it has been, will only allow Tel Aviv more time to create more "facts on the ground," which is just what the Israeli expansionists want.
"It isn't just our perception that settlements are illegal," said Palestinian Authority President Mahmoud Abbas. "It is a global perspective. Everybody views settlements not only as a hurdle, but more than a hurdle to a two-state solution," he said. "We are asking for nothing outside the international legitimacy. It is the responsibility of the Israeli government to halt settlement activities so we can at least speak. "We hope that the Israeli government understands this, he said. "We hope they listen to the many opinions inside Israel itself speaking of the illegality of settlements."
"We should note that rockets were fired from Gaza into southern Israel on Thursday - a reckless and provocative act - while the Israelis showed good faith by avoiding the sorts of defiant acts, like announcing new settlements, that have marred American visits in the past," the New York Times Editorial Board said March 21.
Well, not exactly.
While Obama was still in the region and citing the rocket attack - carried out by a obscure an al-Qaida-linked group at odds with the Hamas government in Gaza - as a justification, the Israeli government cut in half the portion of the sea where it will allow Palestinians in Gaza to fish, threatening the livelihood of some 3,000 Palestinians who depend on the sea. "There is nothing to catch within three miles from shore," 62-year-old fisherman, Talal Shweikh, told the newspaper Ahram, "All the fish that you see in the market today came from Egypt."
Under the terms of the Oslo Accords of 1993, Palestinians were permitted to fish for up to 20 miles off the coast. However, in 2006 this limit was dropped to three. According to one report the restrictions, enforced by the Israeli navy, have resulted in the number of active fishermen shrinking from approximately 10,000 in the year 2000 to around 3,500 today.

Palestinians carry flags in their boats in support of fishermen who continue to encounter Israeli violations against them making fishing more difficult.
March 3rd, 2013 by Hosam Salem / Demotix.com
Israeli authorities also closed Kerem Shalom, the only commercial crossing between Israel and Gaza.
"If there is quiet, the processes easing the lives of Gaza residents will continue. And if there is Katyusha (rocket) fire, then these moves will be slowed and even stopped and, if necessary, even reversed," an official Army Radio broadcast said. "We do not intend to give up on our right to respond to what happens in Gaza because of the agreement with the Turks."

There is a legal term for what the Israeli government is doing to the Palestinians in Gaza. It's called collective punishment and it is against international law.

On March 22, the day President Obama left Israel, the United Nations Human Rights Council passed five resolutions slamming Israel for settlement construction and abuses perpetrated against Palestinian civilians. The U.S. was the only member of the 47-nation council to vote against the measures. Of course, most of the U.S. mass media didn't bother to report the UN action.
"Will Mr. Obama also take the risks that will be needed to be a credible mediator and nudge the parties forward?" the New York Times said last week. "His new secretary of state, John Kerry, is eager to begin and will be in Israel this weekend, but will he have the space to conduct real diplomacy? And is there a sense of urgency on anyone's part? In recent years, Israel has built so many settlements that the options for finding a two-state solution are dwindling."
"Mr. Obama spent four years tweaking his relationship with Israel. On Thursday, he said `peace is possible.' The question is: How much will he, Prime Minister Benjamin Netanyahu of Israel and President Mahmoud Abbas of the Palestinian Authority invest to make it happen?"
"Gone were Obama's demands," Washington Post columnist, Dana Milbank, wrote as Obama was winging it back to Washington. "Suppressed were his lofty ambitions. And absent were expectations, in his audience and among the American public, that he would achieve a peace breakthrough. It was a tacit admission of failure, yet everybody seemed happier with the scaled-back aspirations." On Sunday, the online Middle East commentary page, Mondoweiss, responded. "Does Dana seriously believe Palestinians were happier with `scaled-back aspirations' that leave occupation in place?"
The Israeli daily Haaretz put the question this way March 21: "Here lies the central danger of the visit. The Israeli government and public could conclude, based on the polite tone of the president and the lack of a threat or demonstrative pressure, that Israel is now exempt from having to initiate steps toward resuming the peace process."
"This would be a horrible conclusion," continued Haaretz. "Obama and the United States are not a party to the Israeli-Palestinian conflict. The president of the United States is not the one who must live in a society that is being transformed as a result of the occupation and pushed to the margins of the international community. Netanyahu is correct in saying, as Washington has made clear many times, that the United States cannot want peace more than the parties themselves. But the weakness the Americans have demonstrated until now in every way over the peace process actually proves that it is Israel that must offer new plans and proposals and advance the implementation of the agreed two-state formula.
"Obama can and must make clear to Israel how the continuation of the occupation could affect bilateral relations, harm the U.S. position in the region and erode the American public's support for Israel. He owes this to Israel and to the citizens of his country. Netanyahu, on his part, cannot settle for "surviving" the visit or for mutual pats on the back. He is responsible for renewing negotiations with the Palestinians."
"The US president, of course, has it in his power to confound the skeptics." Stephens wrote in the Financial Times. "He reminded the Iranian regime that he is ready to deploy America's military might to prevent Tehran building a nuclear bomb. Every conversation I have had with those close to him tells me that he is not bluffing. But there's the puzzle. How could a president with sufficient resolve, if needed, to start a war against Iran fail to invest the power and prestige of his office in the cause of a Middle East peace?"
[BlackCommentator.com Editorial Board member and Columnist Carl Bloice is a writer in San Francisco, a member of the National Coordinating Committee of the Committees of Correspondence for Democracy and Socialism and formerly worked for a healthcare union. Bloice is one of the moderators of Portside. Other Carl Bloice writing can be found at leftmargin.wordpress.com.]