Nurses - 'critical new revenue for such critical needs as jobs, healthcare, education, and the international fight against HIV/AIDS and climate change.' 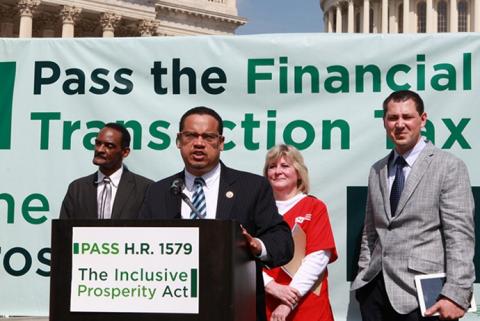 America is not broke, despite what advocates for austerity would have us believe.

This is a very wealthy country.

Unfortunately, transfers of that wealth are not taxed in the same way as the work of American nurses, carpenters, bus drivers and shop clerks. As a result, the federal government struggles to balance budgets, and a yawning gap, between a super-rich 1 percent and the great mass of everybody else, keeps growing.

Congressman Keith Ellison, D-Minnesota, wants to do something about that.

Ellison is reintroducing his Inclusive Prosperity Act, a proposal to add a small “financial transactions tax” on high-volume, high-speed trading by Wall Street speculators. The tax—similar to one that the US imposed until 1966, and to taxes maintained by 40 countries worldwide—would generate roughly $1 trillion in revenue over 10 years.

That’s money that can help to stabilize federal finances and pay for programs that are currently threatened by the proponents of austerity.

“A lot of people in Washington like to talk about reducing the debt and deficits. Well if you really care about reducing the deficit, how about asking Wall Street speculators to pay their fair share?” says Ellison. “This bill will add a tax of a fraction of a percent on transactions made by the same Wall Street firms and stock traders who crashed our economy in 2008. This tax alone will generate up to $300 billion a year in revenue, stabilizing the deficit and allowing us to invest in the things that matter—education, roads and bridges, and health care for our seniors and veterans.”

“We’re not broke," he says. "We’ve got plenty of money. It’s just not in the hands of the American people because the people with so much of the wealth bought lobbyists and influence to get loopholes for themselves so that they would not have to pay for the civilization that is America.”

Ellison’s not listening to the lobbyists. He’s facing the facts.

“The money is in the hands of the most privileged and well-to-do Americans, many of whom churn—and I don’t say ‘trade,’ I mean ‘churn’—stocks, bonds and derivatives on Wall Street,” says the congressman from Minnesota who co-chairs the Congressional Progressive Caucus. “So one of the ways for us as Americans to recoup the money is to tax them when they do this churning of these financial assets. It’s a transaction tax. It is appropriately named by its most vigorous advocates a ‘Robin Hood Tax.’”

The Robin Hood Tax won’t solve all of America’s budget problems. But the union that has been leading the advocacy for passage of Ellison’s proposal, National Nurses United, notes that it “would create a Wall Street sales tax, providing critical new revenue for such critical needs as jobs, healthcare, education, and the international fight against HIV/AIDS and climate change. It would also allow the U.S. to join the rest of the world in a growing system of financial transaction taxes.”

"As the Inclusive Prosperity Act demonstrates, there is not actually a scarcity of public funds for global public goods," Friends of the Earth officials explained in endorsing the Robin Hood Tax movement. "It is a question of political will."

That will is growing, in the US, and abroad.

There’s a dawning international recognition that the answer to austerity is not merely to defend necessary programs from assaults by billionaire-funded groups such as America’s “Fix the Debt” coalition—and the politicians who defer to the pressure for cuts. It is to find the resources to maintain existing programs and to fund new initiatives.

This is something that Americans who seek to establish a genuine safety net for the ailing, the aged and the vulnerable—as well as the whole of society—well understand. That’s why, after Ellison reintroduces his legislation, the Robin Hood Tax Campaign, National Nurses United and other supporters of a financial transactions tax will rally and march in Washington on April 20.

Their message is directed not just at Congress but at the Obama administration, which has been slow to embrace international efforts to implement the Robin Hood Tax.

They’re demanding that Treasury Secretary Lew and President Obama “Stand with the People NOT Wall Street,” and saying, “Wall Street banks and corporations are raking in record profits while our communities continue to suffer job losses and cuts to public programs. Instead of lining the pockets of corporate fat cats, this money should go to our children’s Head Start programs, Grandma’s retirement, and fixing our broken healthcare system. It’s time for the administration to stand with the people and tax Wall Street.”