Labor Needs a Makeover: "The Organizing Model - As American as Apple Pie"

Most US union members belong to very large, highly bureaucratized organizations - the 3 million member NEA, the 2 million member SEIU, the 1.3 million member AFSCME and Teamsters, and so on. Change - whether it be to elect a new slate of officers or to change organizational culture - is a daunting challenge: There are often complex hoops that member-activists and local leaders have to jump through to get dissenting or diverging voices heard. 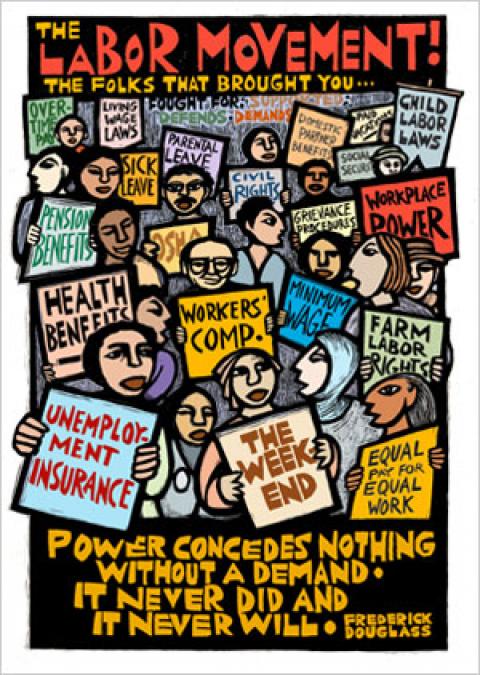 Labor Organizing: Fighting for Justice! (Organizing for Power is a project of The Alliance of Community Trainers. ACT offers knowledge, tools, and skills to individuals, organizations and communities to empower sustainable transformation.),
Reader Response: The Organizing Model-As American as Apple Pie
There is a lot of truth (and good information) in Erik Forman's analysis of the efforts of unions in a number of different countries, including the US, to use the Organizing Model paradigm to revitalize organized labor.  As the author points out, the model was created 25 years ago but not much has changed.  The question is why?
Forman points out that there is an over-reliance on union staff and under-empowerment of members.  The reality is that most US union members belong to very large, highly bureaucratized organizations - the 3 million member NEA, the 2 million member SEIU, the 1.3 million member AFSCME and Teamsters, and so on.  Change - whether it be to elect a new slate of officers or to change organizational culture - is a daunting challenge:  There are often complex hoops that member-activists and local leaders have to jump through to get dissenting or diverging voices heard.  Conventions and conferences are often staged events with little room for substantive debate on deeper issues such as how unions ought to operate, the role of staff and members, and so on.
The elected national officers of many unions are extremely well-compensated as are large swaths of paid staff.   This contributes to a situation in which elected leaders and paid staff have a mutual vested interest in maintaining the status quo. Having a large staff tends to justify large salaries for elected leaders.  Staff members with good salaries want to stay employed or get promoted.
This issue of vested interests is no small matter.  Put yourself in the shoes of an elected officer earning $300,000 a year in a union with a median member salary of say $60,000.  Or in the shoes of a staff director earning $150,000 a year. These are salaries that are not easy to come by.  Earning $300,000 a year puts you in the top 2% of income earners.[1]  A $150,000 salary puts you in the top 5%.
The bureaucratic hierarchies of the large unions - who account for well over 90% of organized labor - are massive webs of elected office-holders and staff members each dependent on the other for their jobs and benefits.  Staff members rely upon the elected officers they ultimately report to in order to keep their jobs or get promoted. Elected officers rely heavily on paid staff to keep their jobs - that is they count on staff to help them get re-elected.
One way that staff helps to get officers re-elected is by providing good representational services to the members - the essence of the Servicing Model Many of these services could be performed by well-trained local leaders and activists - a key ingredient of the Organizing Model.
Staff members also help to re-elect officers through subtle and not-so-subtle activities that often amount to internal interference: arm twisting, deal making, and wining-and-dining with expense accounts.
One reform that might make a big difference would be to change the prevailing system of having full-time elected leaders running the day-to-day operations of unions.  Some of the most effective unions are led by elected Executive Boards composed of working members who hire full-time Executive Directors to oversee staff and implement the policies and programs that the elected Board members and/or convention delegates create.
Electing full-time officers tends to foster leadership whose main interest becomes its own self-perpetuation.  This not only feeds the growth of excessive salaries, creating an ever greater gap between elected officers and members, but also encourages various forms of corruption and nepotism as elected leaders seek to curry favors or use their position to hire family and friends or to reward allies.
The culture of "business unionism" or "business-as-usual unionism" is not easy to change.  Obstacles to BIG change in US unions include (1) the numerical and geographic SIZE of unions; (2) the challenge faced by member activists who often work long hours, sometimes more than one job, to find the necessary time to organize and mobilize; and (3) the sense of powerlessness, fear, and alienation felt by large numbers of members in this extended period of high unemployment, globalization, technological displacement, and economic uncertainty.
There are two ways that fundamental change can happen (and in at least some cases is happening).  The first way, as was described by Forman, is through the very hard work of grassroots, rank-and-file organizing. The second way is through bold and visionary leadership - something that has become a rare commodity indeed in the universe of organized labor.
[1] Mark Zimmerman, "Labor's One-Percent", Portside, February 10, 2012
[Mark Zimmerman has been involved with organized labor for over thirty years. He can be contacted at iamzimmerman@gmail.com ]