Strike and You're Out: The Supreme Court's Destruction of the Right to Strike

The strike has long been labor's most powerful weapon. Strikes put pressure on the employer - which needs the employees' labor to run the business. Congress understood the importance of the strike to labor unions, so it protected strikes in two ways in the National Labor Relations Act (NLRA). Although Congress made it clear that it viewed the strike as a right of utmost importance, the Supreme Court wasted no time in limiting and weakening the right to strike. 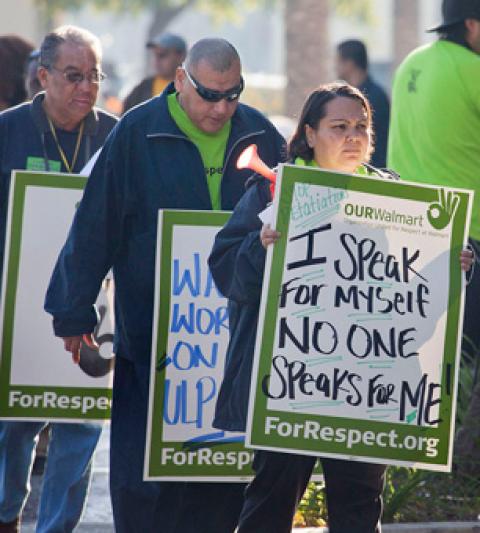 Walmart Respect Campaign, UFCW, (Photo: UFCW International Union / Flickr)
The strike has long been labor's most powerful weapon. Strikes put pressure on the employer - which needs the employees' labor to run the business - to agree to employees' demands for fair wages and working conditions.
Strikes are also a public form of expression. Seeing striking workers marching in front of a workplace sends a message to the employer, to the public and to the workers themselves. It says that the workers stand together to fight for decent working conditions and that their dispute with the employer is so important that they are willing to lose pay to fight for a fair workplace. It tells the public and other workers that they might not want to patronize, or work for, the employer unless changes are made. Strikes build solidarity among the workers and help them maintain their resolve under the severe pressure of losing income while on strike. Strikes are also an expression of control by the workers, who may feel that the employer treats them as if they were nothing more than a live form of raw materials.
Congress understood the importance of the strike to labor unions, so it protected strikes in two ways in the National Labor Relations Act (NLRA). First, strikes are covered by the broad protection Section 7 gives to all group actions directed at improving terms and conditions of employment. Despite this broad protection, which includes strikes, Congress thought it important to repeat in Section 13 that nothing in the law "except as specifically provided for herein, shall be construed so as either to interfere with or impede or diminish in any way the right to strike."
This week's installment in our series on the NLRA discusses permanent replacement of strikers, while next week's installment will discuss other judicially created limits on the right to strike.
Although Congress made it clear that it viewed the strike as a right of utmost importance, the Supreme Court wasted no time in limiting and weakening the right to strike. In 1938, just three years after Congress approved the NLRA, in NLRB v. Mackay Radio (NLRB is the National Labor Relations Board),the Supreme Court said that employers had the right to permanently replace strikers. In other words, the court gave employers legal cover to fire strikers, despite the clear protection for strikes under Section 7 and 13.
While permanent replacement is not precisely the same as discharge, the fear of permanent replacement hangs over the right to strike.
What, you might ask, is the difference between replacing a striker and firing a striker?
A permanently replaced employee has the right to return to the job if, and when, the replacement worker leaves, creating a vacancy. This right may be important to a worker with long service whose replacement leaves soon after the strike ends.
But for many workers, replacement is no different than being fired. It means the replaced strikers must find other work to support themselves and their families. Even though they have a possible right to return to the job months or years later, that right is essentially worthless. Some people call striker replacement "industrial capital punishment."
Most important, however, is that just the threat of being permanently replaced damages the right to strike. It takes away this important legal right because the great risk that striking workers may lose their jobs may discourage them from striking at all.
Where did the court in Mackay Radio find the right to permanently replace striking workers? It is nowhere to be found in the NLRA. It cannot be found written in any law. The court just presumed that the right to operate a business carries with it the right to replace striking workers permanently. The court did not even require the employer to prove that it could not continue to operate the business with supervisors or temporary replacements before taking the extraordinary step of permanently replacing the legally striking workers. The court gave this presumed right of employers more weight than the employees' right to strike expressly granted to them by Congress.
In the last 30 years, employers have frequently used permanent replacements to defeat strikes. Just the threat of permanent replacement can destroy solidarity among striking workers. Those who are more easily replaced will be tempted to return to work when a threat is made, while workers with skills that are harder to find will be more able to resist the threats and remain on strike. As a result, bitter divisions can occur, further damaging the workers' power. Although striker replacement is not the only reason strikes are far less common today, it is certainly an important factor. The reduction in the power of strikes has contributed to the view that the NLRA has outlived its usefulness. One reason for passage of the NLRA was to reduce widespread labor unrest and provide a peaceful method for settling labor disputes. With no realistic strike threat, employers have little need for the NLRA, and many would be happy to see its elimination. Without the judicial amendments, however, the language of the NLRA shines out as a powerful law intended to protect both management and labor alike.
[Ellen Dannin is the author of Taking Back the Workers Law - How to Fight the Assault on Labor Rights (Cornell University Press).
Ann C. Hodges is professor of law at the University of Richmond, where she teaches and writes in the areas of labor and employment law. Prior to joining the faculty, she practiced labor and employment law in Chicago and worked for the National Labor Relations Board as a field examiner.]
Copyright, Truthout. May not be reprinted without permission. Used with permission of the authors.