Message to Graduates 2013 and 1968 - Hopes, Struggles, Huge and the Biggest Debt Ever

Cynicism or struggle? Cynicism is self-fulfilling prophesy. The generation of 1968 fought - America changed. The changes didn't come easily. Every positive step was met with determined resistance. But we became better and stronger because we were determined to change. Today to make progress, to prevent slipping backwards - will require no less steadfastness, intelligence, and patience than was necessitated before. Graduates today are the most indebted - ever. 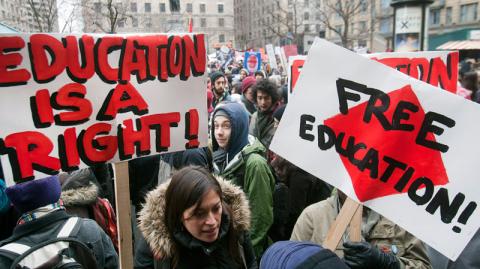 You got to fight, for your right, to study, Montreal Attitude
The Triumph of Progressivism: Graduation 2013 and 1968
by Robert Reich
May 13, 2013
Robert Reich blog
Many of you soon-to-be college graduates are determined to make the world a better place. Some of you are choosing careers in public service or joining nonprofits or volunteering in your communities.
But many of you are cynical about politics. You see the system as inherently corrupt. You doubt real progress is possible.
"What chance do we have against the Koch brothers and the other billionaires?" you've asked me. "How can we fight against Monsanto, Boeing, JP Morgan, and Bank of America? They buy elections. They run America."
Let me remind you: Cynicism is a self-fulfilling prophesy. You have no chance if you assume you have no chance.
"But it was different when you graduated," you say. "The sixties were a time of social progress."
You don't know your history.
When I graduated in 1968, the Vietnam War was raging. Over half a million American troops were already there. I didn't know if I'd be drafted.  A member of my class who spoke at commencement said he was heading to Canada and urged us to join him.
Two months before, Martin Luther King Jr. had been assassinated. America's cities were burning. Bobby Kennedy had just been gunned down.
George ("segregation forever") Wallace was on his way to garnering 10 million votes and carrying five southern states. Richard Nixon was well on his way to becoming president.
America was still mired in bigotry.
I remember a classmate who was dating a black girl being spit on in a movie theater. The Supreme Court had only the year before struck down state laws against interracial marriage.
My entire graduating class of almost 800 contained only six young black men and four Hispanics.
I remember the girlfriend of another classmate almost dying from a back-alley abortion, because safe abortions were almost impossible to get.
I remember a bright young woman law school graduate in tears because no law firm would hire her because she was a woman.
I remember one of my classmates telling me in anguish that he was a homosexual, fearing he'd be discovered and his career ruined.
The environmental movement had yet not been born. Two-thirds of America's waterways were unsafe for swimming or fishing because of industrial waste and sewage.
I remember rivers so polluted they caught fire. When the Cuyahoga River went up in flames Time Magazine described it as the river that "oozes rather than flows," in which a person "does not drown but decays."
In those days, universal health insurance was a pipe dream.
It all seemed pretty hopeless. I assumed America was going to hell.
And yet, reforms did occur. America changed. The changes didn't come easily. Every positive step was met with determined resistance. But we became better and stronger because we were determined to change.
When I graduated college I would not have believed that in my lifetime women would gain rights over their own bodies, including the legal right to have an abortion. Or women would become chief executives of major corporations, secretaries of state, contenders for the presidency. Or they outnumber men in college.
I would not have imagined that eleven states would allow gays and lesbians to marry, and a majority of Americans would support equal marriage rights.
Or that the nation would have a large and growing black middle class.
It would have seemed beyond possibility that a black man, the child of an interracial couple, would become President of the United States.
I would not have predicted that the rate of college enrollment among Hispanics would exceed that of whites.
Or that more than 80 percent of Americans would have health insurance, most of it through government.
I wouldn't have foreseen that the Cuyahoga River - the one that used to catch fire regularly - would come to support 44 species of fish. And that over half our rivers and 70 percent of bays and estuaries would become safe for swimming and fishing.
Or that some 200,000 premature deaths and 700,000 cases of chronic bronchitis would have been prevented because the air is cleaner.
Or that the portion of children with elevated levels of lead in their blood would have dropped from 88 percent to just over 4 percent.
I would not have believed our nation capable of so much positive change.
Yet we achieved it. And we have just begun. Widening inequality, a shrinking middle class, global warming, the corruption of our democracy by big money - all of these, and more, must be addressed. To make progress on these - and to prevent ourselves from slipping backwards - will require no less steadfastness, intelligence, and patience than was necessitated before.
The genius of America lies in its resilience and pragmatism. We believe in social progress because we were born into it. It is our national creed.
Which is to say,  I understand your cynicism. It looks pretty hopeless.
But, believe me, it isn't.
Not if you pitch in.
[Robert B. Reich is, Chancellor's Professor of Public Policy at the University of California at Berkeley, was Secretary of Labor in the Clinton administration. Time Magazine named him one of the ten most effective cabinet secretaries of the last century. He has written thirteen books, including the best sellers "Aftershock" and "The Work of Nations." His latest, "Beyond Outrage," is now out in paperback. He is also a founding editor of the American Prospect magazine and chairman of Common Cause.]
Number of the Week: Class of 2013, Most Indebted Ever
By Phil Izzo
May 18, 2013
The Wall Street Journal
$30,000: The average student-loan debt for a borrower who received a bachelor's degree in 2013.
The class of 2013 entered college just as the economic recovery was beginning in June 2009, but while their job prospects are better than other recent graduates, their debt burden is heavier. 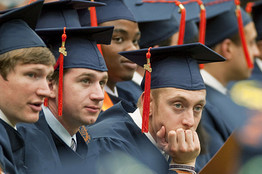 Total outstanding student-loan debt stood at $986 billion at the end of the first quarter of this year, according to the Federal Reserve Bank of New York. That's up 2.1% from the previous quarter and nearly 50% from the same quarter in 2009.
The average debt load for each borrower receiving a bachelor's degree this year is about $30,000, according to an analysis of government data by Mark Kantrowitz, publisher at student-marketing company Edvisors. That number has doubled over the course of a recent graduate's lifetime. Even adjusting for inflation, the average debt burden was half that size 20 years ago.
Other groups put the average debt figure even higher. A poll from Fidelity Investments earlier this week found 70% of graduates had at least some debt, and the average was $35,200. That figure is higher in part because it includes debt owed to family and credit-card balances. 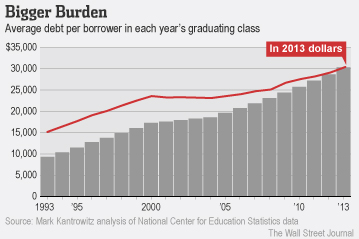 No matter how you slice it, that's a pretty sizable burden to begin your working life. Of course, in general, a college degree is a worthwhile investment. The unemployment rate for graduates was 3.9% in April. Recent college grads aren't doing quite as well, as the jobless rate for 16-24 year olds with a degree was 7.1% in 2012, and many are stuck in low-paid jobs. But they're better off than those without a diploma. The unemployment rate for all 16-24 year olds not enrolled in school was 17% last year.
The worst situation is faced by those who don't complete college. They get the burden of student debt without the benefit of a degree. The median annual income of a noncompleter from a private nonprofit four-year school was $25,000 in 2009 compared to $33,900 for a degree holder, even though both accumulated similar levels of debt per year enrolled.
There is one piece of good news for the class of 2013: they aren't likely to hold the title of "Most Indebted Ever" for long. Amid continued growth in both tuition costs and student lending, they are likely to pass the mantle to the class of 2014 next May just as they assumed it from the class of 2012.