The ramifications of the Obama speech and Holder letter will be felt in the weeks ahead. 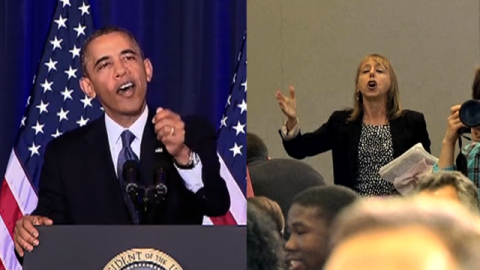 President Barack Obama’s speech at the National Defense University on counterterrorism revealed a commander-in-chief increasingly worried about political criticism of his Guantanamo detentions, his penchant for secrecy and his drone warfare policies. Where Obama has shielded his policies on the basis of external terrorist threats, he now is responding to critics who threaten to upset domestic support for those policies abroad.

In past years, Obama has defended himself against attacks from neo-conservative hawks and senators like John McCain, Joe Lieberman, and Lindsay Graham, who charged him with being “soft” on terrorism. But today, while defending his military policies as constitutional, the president was promising to wind down the “forever war,” sharply reduce drone attacks, repatriate detainees to Yemen, and move again to close Guantanamo. When disrupted by Code Pink’s Medea Benjamin, Obama spontaneously said that Benjamin was “worth paying attention to,” and was “willing to cut the young lady who interrupted [him] some slack because it’s worth being passionate about.”

.Such a gesture will hardly pacify Code Pink or the president’s antiwar critics. But their criticisms have become a factor in the national debate. To criticize the president’s speech as “nothing new” is to miss the primary reason for which the speech was given: to explain a careful withdrawal from the Global War on Terrorism paradigm, the heinous impasse at Guantanamo, and the massive secrecy around drones.

The President was cautious in explaining his pivot toward de-escalation, mindful that incidents like Benghazi or the Boston Marathon bombings can block his de-escalation path, or at least complicate it severely.

The speech, along with Attorney General Eric Holder’s letter and background briefings, for the first time revealed the following:

Obama let it be known that the CIA will cede its control of the drone war to the Pentagon in six months, opening the way to greater public transparency and overdue congressional debate – Pentagon budgets can be amended while CIA items are unmentionable secrets in Washington;

Obama called the 2001 Authorization for the Use of Military Force “near obsolete” and proposed its eventual repeal;

Clarified that drones will not be used after American ground forces leave Afghanistan, a signal the Taliban and Pakistan will hear;

Vowed to “limit the use of lethal force” to only those targets considered to be ”continuing, imminent threat(s) to Americans,” which could “signal an end” (according to the New York Times) of so-called ‘signature strikes’ or where the threats are to partner-states but not American personnel;

Acknowledged for the first time that US drone attacks have killed civilians.

Declassified the official information that the US killed Anwar al-Awlaki and three other Americans;

Announced consultations with the media and a report on new whistleblower guidelines by July 12;

Appointed a new State Department official “to achieve the transfer” of Yemeni detainees from Guantanamo.

The ramifications of the Obama speech and Holder letter will be felt in the weeks ahead. Asked if there will be effects on existing human rights cases, Vincent Warren, executive director of the Center for Constitutional Rights (CCR) said, “It does, because they never admitted to killing Abdul Rahman, the teenager, in the court papers, nor did they acknowledge that they killed people that they were not targeting. I have a sense that their legal justifications are going to shift, but not sure to what. (It) may be clearer in the coming weeks.”

In a related development, federal judge Rosemary Collyer required the Justice Department to report in two weeks on how the admissions affected the legal issues in the case. While defining al-Awlaki as a justifiable security threat, the administration now says the other three deaths, including aw-Awlaki’s 16-year old son, were not specifically targeted, raising the question of whether the administration will be held accountable in the federal court.