The House passed a bill that sounds good, but doesn’t end Washington's failed, militarized approach or get to root problems. 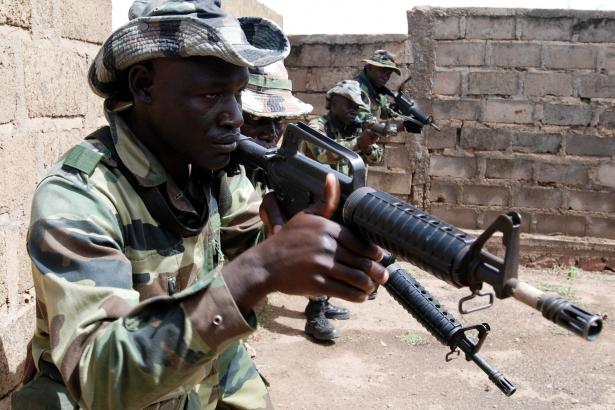 Last month the U.S. House of Representatives passed the “Trans-Sahara Counterterrorism Partnership Program Act of 2021” with strong bipartisan support. Current U.S. policies have been counterproductive and a new U.S. policy is desperately needed in Africa and elsewhere in the global south. However, the proposals outlined in this bill — while welcome — risk being nothing more than a change of sentiment.

Sponsored by seven Republicans and five Democrats, H.R. 567 garnered the votes of 214 Democrats and 181 Republicans on June 29. Acknowledging the failure of U.S. counterterrorism policies in North and West Africa, the bill would establish a new interagency U.S. government program that is intended to bolster African countries’ capacities to counter terrorist threats in the Maghreb and Western Sahel.

It claims to offer a new strategy that “balances security activities with diplomatic and development efforts to address the political, socioeconomic, governance, and development challenges…that contribute to terrorism and violent extremism.”

The warning signs are clear. The bill fails to critique the military-heavy approach that has resulted in endless wars on two continents. It passed without policy review, debate, or significant dissent — such a rarity in the current Congress that their absence arouses suspicion.

The impact of climate change — a major driver of conflict throughout the global south — instability sparked by global pandemics, and illicit financial flows that are draining Africa of its wealth were not mentioned. Nor was a prospective budget discussed. Given the magnitude of such a policy shift and the deep roots of the military-industrial complex, the casual manner in which the program was approved and the perils of bureaucratic inertia suggest lip service to a new strategy, but adherence to the failed military-dominated policies of the past.

In some ways the bill offers a more nuanced paradigm than previous approaches. It does not lump all violent extremists into a homogeneous group that embraces a violent interpretation of Islam and serves as an outpost of global terrorism. Rather than blaming religious beliefs, it emphasizes the underlying political, economic, and social causes of regional violence — albeit with glaring omissions.

Furthermore, it acknowledges that “poor governance, political, and economic marginalization, and lack of accountability for human rights abuses by security forces are drivers of extremism” and that it is in the U.S. national security interest to address structural causes that require non-military responses. This recasting of counterterrorism strategy reflects the most recent assessments of Western policy think tanks and other experts, including the International Monetary Fund.

In theory, the lead player is the U.S. Secretary of State who, “in consultation with the Secretary of Defense and the Administrator of the United States Agency for International Development, shall establish a partnership program to coordinate all programs, projects, and activities of U.S. government.”

However, since its founding, the TSCTP’s primary focus has been military — the provision of military equipment, logistical support, and border control training, as well as the use of U.S. Special Operations Forces to train African partners in counterterrorism and combat techniques. Moreover, the TSCTP falls under the authority of the U.S. Africa Command (AFRICOM), a unified military command that oversees U.S. Army, Navy, Air Force, and Marine activities in Africa.

It remains to be seen if the rhetoric of democracy and accountability will be matched by appropriate budgetary allocations and enforcement. In the past, the Defense Department and security sector budget for TSCTP has dwarfed those of civilian-oriented programs sponsored by the State Department and USAID. Although that balance could be reversed in a new budget, there is little indication that the present Congress has the will and that State and USAID have the clout to stand up to the Pentagon.

Just last year, most Democrats joined Republicans to oppose a 10 percent reduction in the Pentagon’s $740.5 billion budget. The institutions invested in military solutions have far more influence than Western policy think tanks and academics who promote alternative strategies. They must counter the widespread assumption that the forcible quelling of insurgencies must precede governance-focused efforts. And, despite mission statements to the contrary, counterterrorism programs have paid only sporadic attention to the realities of national governments and the grievances of local communities.

Historically, the imbalance between military and civilian programs has been evident not only in the unequal allocations for Defense and State, but also for allocations within the State Department. Funds have been heavily weighted toward interior ministries, police, and border security forces that often abuse civilians. Last year, for instance, 95 percent of the budget for the State Department Counterterrorism Bureau was allotted to law enforcement programs. That left only 5 percent of the budget for community-led, civilian-oriented projects.

The militarization of U.S. economic aid intensified with the establishment of AFRICOM, which assumed responsibility for many initiatives previously under the jurisdiction of USAID. Soldiers engaged in activities for which they were not trained — and trained experts were shunted aside. Although AFRICOM was billed as promoting “African solutions to African problems,” its programs were developed without significant consultation with African civil societies, and U.S. rather than African security concerns have dominated the agenda.

The absence of political will to redistribute resources from military to civilian-oriented programs is not the only problem. H.R. 567 calls for improvement in government transparency and accountability, anti-corruption measures, and delivery of basic services in order to enhance state legitimacy and authority. However, the bill provides little insight into how the U.S. will make these goals a reality, given its partnership with numerous deeply anti-democratic regimes.

The identification of the drivers of extremism and the goals outlined in the bill are not new. Although they have been included in U.S. foreign aid programs for many years, the failure to enforce them and the tendency to turn a blind eye to partner abuses have undermined their credibility. The current text contains scant mention of the government and military abuses of civilian populations that have driven many aggrieved to support extremist organizations.

Nor does it note the complicity of government and military officials with violent extremist and smuggling networks and the fact that many profit from the continuation of conflict, lawlessness, and weak governance.

Past experience does not bode well for the future. When extremist violence has intensified, lofty goals have been cast aside, and the U.S. has increased military spending and decreased attention to its partners’ corruption, abuses, and lack of accountability. Expert opinion on violence in the Sahel is united in the view that continued military escalation without deep political, economic, and social transformation will be not only ineffective, but also counterproductive.

What evidence do we have that this time, the United States is serious?

Half a year into the 117th Congress and the new presidential administration, the verdict on the future of U.S. Africa policy is not fully in. The House of Representatives has passed a new-look counterterrorism bill with significant bipartisan support. The bill is strong on rhetoric and talks the talk, but will it walk the walk? It remains to be seen if the U.S. will build back better on Africa policy or double down on the failed policies of the past.

William Minter is the editor of AfricaFocus Bulletin. Elizabeth Schmidt is professor emeritus of history at Loyola University Maryland and the author of six books about Africa.