The Donkey of the Messiah 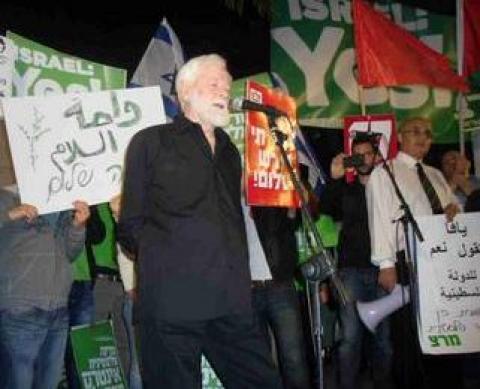 “THE TWO-STATE solution is dead!” This mantra has been repeated so often lately, by so many authoritative commentators, that it must be true.

It reminds one of Mark Twain’s oft quoted words: “The report of my death was an exaggeration.”

Actually, this only shows how ideas move in circles. When we declared in early 1949, just after the end of the first Israeli-Arab war, that the only answer to the new situation was the establishment of a Palestinian state side by side with Israel, the “one-state solution” was already old.

The idea of a “bi-national state” was in vogue in the 1930s. Its main advocates were well-meaning intellectuals, many of them luminaries of the new Hebrew University, like Judah Leon Magnes and Martin Buber. They were reinforced by the Hashomer Hatza’ir kibbutz movement, which later became the Mapam party.

It never gained any traction. The Arabs believed that it was a Jewish trick. Bi-nationalism was built on the principle of parity between the two populations in Palestine – 50% Jews, 50% Arabs. Since the Jews at that time were much less than half the population, Arab suspicions were reasonable.

On the Jewish side, the idea looked ridiculous. The very essence of Zionism was to have a state where Jews would be masters of their fate, preferably in all of Palestine.

At the time, no one called it the “one-state solution” because there was already one state – the State of Palestine, ruled by the British. The “solution” was called “the bi-national state” and died, unmourned, in the war of 1948.

WHAT HAS caused the miraculous resurrection of this idea?

Not the birth of a new love between the two peoples. Such a phenomenon would have been wonderful, even miraculous. If Israelis and Palestinians had discovered their common values, the common roots of their history and languages, their common love for this country – why, wouldn’t that have been absolutely splendid?

But, alas, the renewed “one-state solution” was not born of another immaculate conception. Its father is the occupation, its mother despair.

The occupation has already created a de facto One State – an evil state of oppression and brutality, in which half the population (or slightly less than half) deprives the other half of almost all rights – human rights, economic rights and political rights. The Jewish settlements proliferate, and every day brings new stories of woe.

Good people on both sides have lost hope. But hopelessness does not stir to action. It fosters resignation.

LET’S GO back to the starting point. “The two-state solution is dead”. How come? Who says? In accordance with what scientific criteria has death been certified?

Generally, the spread of the settlements is cited as the sign of death. In the 1980s the respected Israeli historian Meron Benvenisti pronounced that the situation had now become “irreversible”. At the time, there were hardly 100 thousand settlers in the occupied territories (apart from East Jerusalem, which by common consent is a separate issue). Now they claim to be 300 thousand, but who is counting? How many settlers mean irreversibility? 100, 300, 500, 800 thousand?

History is a hothouse of reversibility. Empires grow and collapse. Cultures flourish and wither. So do social and economic patterns. Only death is irreversible.

I can think of a dozen different ways to solve the settlement problem, from forcible removal to exchange of territories to Palestinian citizenship. Who believed that the settlements in North Sinai would be removed so easily? That the evacuation of the Gaza Strip settlements would become a national farce?

In the end, there will probably be a mixture of several ways, according to circumstances.

All the Herculean problems of the conflict can be resolved - if there is a will. It’s the will that is the real problem.

THE ONE-STATERS like to base themselves on the South African experience. For them, Israel is an apartheid state, like the former South Africa, and therefore the solution must be South African-like.

The situation in the occupied territories, and to some extent in Israel proper, does indeed strongly resemble the apartheid regime. The apartheid example may be justly cited in political debate. But in reality, there is very little deeper resemblance – if any - between the two countries.

David Ben-Gurion once gave the South African leaders a piece of advice: partition. Concentrate the white population in the south, in the Cape region, and cede the other parts of the country to the blacks. Both sides in South Africa rejected this idea furiously, because both sides believed in a single, united country.

They largely spoke the same languages, adhered to the same religion, were integrated in the same economy. The fight was about the master-slave relationship, with a small minority lording it over a massive majority.

Nothing of this is true in our country. Here we have two different nations, two populations of nearly equal size, two languages, two (or rather, three) religions, two cultures, two totally different economies.

A false proposition leads to false conclusions. One of them is that Israel, like Apartheid South Africa, can be brought to its knees by an international boycott. About South Africa, this is a patronizing imperialist illusion. The boycott, moral and important as it was, did not do the job. It was the Africans themselves, aided by some local white idealists, who did it by their courageous strikes and uprisings.

I am an optimist, and I do hope that eventually Jewish Israelis and Palestinian Arabs will become sister nations, living side by side in harmony. But to come to that point, there must be a period of living peacefully in two adjoining states, hopefully with open borders.

THE PEOPLE who speak now of the “one-state solution” are idealists. But they do a lot of harm. And not only because they remove themselves and others from the struggle for the only solution that is realistic.

Indeed, the one-state solution is the common aim of the extreme Zionist right and the extreme anti-Zionist left. And since the right is incomparably stronger, it is the left that is aiding the right, and not the other way round.

In theory, that is as it should be. Because the one-staters believe that the rightists are only preparing the ground for their future paradise. The right is uniting the country and putting an end to the possibility of creating an independent State of Palestine. They will subject the Palestinians to all the horrors of apartheid and much more, since the South African racists did not aim at displacing and replacing the blacks. But in due course – perhaps in a mere few decades, or half a century – the world will compel Greater Israel to grant the Palestinians full rights, and Israel will become Palestine.

According to this ultra-leftist theory, the right, which is now creating the racist one state, is in reality the Donkey of the Messiah, the legendary animal on which the Messiah will ride to triumph.

It’s a beautiful theory, but what is the assurance that this will actually happen? And before the final stage arrives, what will happen to the Palestinian people? Who will compel the rulers of Greater Israel to accept the diktat of world public opinion?

Speaking about a process that will surely last 50 years and more, who knows what will happen? What changes will take place in the world in the meantime? What wars and other catastrophes will take the world’s mind off the “Palestinian issue”?

Would one really gamble the fate of one’s nation on a far-fetched theory like this?

ASSUMING FOR a moment that the one-state solution would really come about, how would it function?

Will Israeli Jews and Palestinian Arabs serve in the same army, pay the same taxes, obey the same laws, work together in the same political parties? Will there be social intercourse between them? Or will the state sink into an interminable civil war?

Other peoples have found it impossible to live together in one state. Take the Soviet Union. Yugoslavia. Serbia. Czechoslovakia. Cyprus. Sudan. The Scots want to secede from the United Kingdom. So do the Basques and the Catalans from Spain. The French in Canada and the Flemish in Belgium are uneasy. As far as I know, nowhere in the entire world have two different peoples agreed to form a joint state for decades.

NO, THE two-state solution is not dead. It cannot die, because it is the only solution there is.

Despair may be convenient and tempting. But despair is no solution at all.