A 100-Year-Old Idea That Could Transform the Labor Movement

With the traditional union model and its emphasis on bargaining by representatives exiting the stage, working people are urgently searching for a new way to challenge corporate power and win a better life for their families. One hundred years later, the road not taken—represented by Local 8—represents one model. 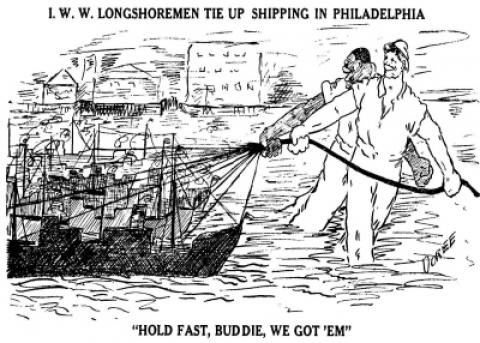 One hundred years ago this month, a long-forgotten union powered by a remarkable engine of everyday solidarity and direct action was born. The union's distinguishing feature—that it was directly operated by workers on the job, bears little resemblance to today's traditional labor movement with formal negotiation by a bargaining agent as the end goal of even the most creative campaigns. With over 93 percent of private sector workers finding themselves outside of traditional union membership and with little prospect of getting in, this dramatically different and powerful unionism offers a compelling path forward for workers today.

The story of Local 8 of the Industrial Workers of the World (IWW) begins with a large industry-wide strike of longshoremen on the docks of Philadelphia. The local union borne of that May 1913 strike represented, in the view of some, the high-water mark of durable power and multiracial organizing in the widely-studied IWW. Despite that, its story was almost relegated to the proverbial dustbin of history.

The Local 8 example, and the road not taken for labor that it represents, was resurrected by historian Peter Cole in two recent books: Wobblies on the Waterfront: Interracial Unionism in Progressive-Era Philadelphia and Ben Fletcher: The Life and Times of a Black Wobbly. His painstaking work unearthing this history is a major contribution to today's search for effective models of worker power.

While Local 8's solidarity unionism model, to use Staughton Lynd's term, was not that of the traditional labor union and its representational approach, it shouldn't be mistaken for the model used by today's worker centers either. Worker centers do stress leadership development, worker education, and community involvement, just as Local 8 did. But Local 8 was explicitly and proudly a labor union, and the control it exerted through worker organization on the job and across Philadelphia's maritime industry was the hallmark of union power.

With a solid consensus that labor needs to change and many ideas on how to accomplish that change, Local 8 stands out as a fundamentally different path forward. Put another way, Local 8 blends the best of the worker center movement—dynamism, flexibility, and openness to community—with the best of unionism—long-term organized power at work and in an industry).

Philadelphia's longshoremen labored along one of the most important waterfronts in the WWI era. The workforce was diverse and, prior to Local 8, segregated. The workers were largely either African American, recent Eastern European immigrants or native-born workers of Irish descent. In an era plagued by racial violence, discrimination and xenophobia, Philadelphia still managed to stand out as an incredibly oppressive environment. United employers, backed by the government, meted out vicious attacks against worker organization and movements for change. Against this backdrop, the strike that launched Local 8 a hundred years ago and the subsequent consolidation of worker-operated union power on the port are all the more remarkable.

Workers had had enough with poverty wages, dangerous conditions, excruciatingly long working hours and a humiliating “shape-up” system where workers had to contend for a job each and every day at the whim of intensely corrupt hiring bosses. On May 13, 1913, Philadelphia's longshore workers launched an industry-wide strike against the entrenched power structure of the shipping magnates.

The success of the strike against the odds set the stage for one of the most important, and least remembered, labor union achievements in the United States.

Stoking racial divisions was a central employer tactic on Philadelphia's docks. The labor movement itself was soaked in racial prejudice, segregation, and outright exclusion. Undergirded by the IWW's ideological commitment to equality, Local 8 pioneered a deeply anti-racist labor union practice in the organization and in the industry with reverberations around the labor movement. The work groups of longshoremen (they were all men) who loaded and unloaded ships had been segregated. The union successfully ended that practice and everyday work began to be carried out by multiracial groups of workers. The union membership was multiracial and that extended to the leadership itself. One of Local 8's preeminent leaders, Ben Fletcher, helped set the tone with grounded, passionate appeals for worker unity across racial and ethnic lines.

The vicious and hated shape-up was ended in favor of a union hiring hall where equity rather than favoritism and corruption reigned. Workers won significant wage increases, substantial improvements in conditions of work, and recognition of their membership in Local 8.

Local 8 wasn't just created by a direct action—and  that's what is so remarkable and instructive about its example. Each and every gain on the job and in the industry—from big-picture issues like wages and hours, to fighting back against everyday management abuse—was won by direct organizing, rather than representation by union officials.

The exclusive collective bargaining agreement between company and union as well as the employer collected-dues that come with it are sacred cows in the contemporary labor movement. How did Local 8 maintain a union industry with a union standard without signing contracts?

Dues-paying members of Local 8 wore pins that indicated that they were in good standing for a given month. If a worker showed up to unload a ship without the pin for the month, he'd be approached by his union co-workers. The worker would be informed or reminded that this was a union job, with the higher standard of living and dignity that came with organized work. At that point, ideally, the worker would get his dues paid to one of his co-workers serving as an elected delegate of Local 8.

If the worker couldn't be persuaded to join or get paid up and the boss allowed him to undermine the standard by working non-union, workers would strike on the spot. In the highly time-sensitive business of unloading a ship, it wouldn't be long until the fellow worker would pay up, move on or get laid off until getting into good standing. A union job secured not by operation of a contract but by the initiative and power of worker self-activity is the hallmark of solidarity unionism and the Local 8 model.

Higher wages, more humane hours, critical safety improvements, the end of segregated work and union recognition itself, were all secured by Local 8 members outside of any collective bargaining agreement. With this powerful organizing model, commitment to education, and deep relationships in the community, Local 8 was able to exert a large measure of control over individual jobs and Philadelphia's maritime industry overall. Members, families, and supporters would even commemorate the union's May birthday in style, with a one-day strike and celebration.

Local 8 never received the support it would have needed to endure against the multitude of forces arrayed against it. Battered by the unjust imprisonment of its leaders, relentless employer attacks, aggressive pressure from a government favored union, and its own internal strains, Local 8 of the IWW was defeated in the years after World War I. The federal National Labor Relations Act followed in 1935 and the consolidation of the traditional union model, now unraveling, was largely complete.

With the traditional union model and its emphasis on bargaining by representatives exiting the stage, working people are urgently searching for a new way to challenge corporate power and win a better life for their families. One hundred years later, the road not taken—represented by Local 8—holds the key.

Daniel Gross, an organizer and workers' rights attorney, is the founder and executive director of Brandworkers. Based in New York City, Brandworkers helps food production and distribution workers develop their own direct action campaigns to overcome wage theft, anti-immigrant abuse, and reckless disregard for worker health & safety. He is the co-author with Staughton Lynd of Labor Law for the Rank & Filer: Building Solidarity While Staying Clear of the Law and Solidarity Unionism at Starbucks. As a Starbucks barista in 2004, he co-founded the IWW Starbucks Workers Union, which continues to break new ground in fast food organizing outside of formal government certification or employer recognition.