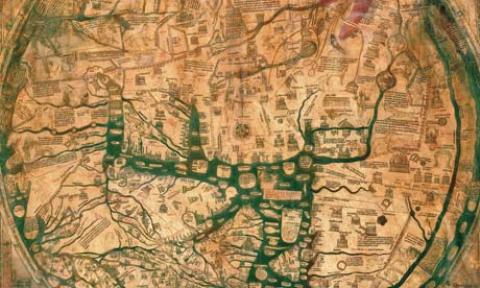 The Hereford mappa mundi, c 1285, shows Jerusalem at the centre of the world. ‘World maps are always made with the beliefs and prejudices of their makers.', The Guardian (UK)

The Potential Problem With Personalized Google Maps? We May Never Know What We're Not Seeing

Google has crammed a dozen notable updates into the revamped Google Maps that was unveiled this week. The new map integrates air-travel routes, and Google Earth's 3D cityscapes, and better passage through Street View. But the real game-changer in the new application is that Google promises to build a customizable map for everyone.

Customization is seemingly the future of everything. But, in some contexts, customization also comes at a cost. We already know that the inequality of information online is rendering some real-world people and places virtually invisible. Will customizable maps further exacerbate this new twist on inequality?

In the near future the maps we see will be dynamically generated and highly personalized, giving preferential treatment to the places frequented by our social networking friends, the places we mention in our emails, the sites we look up on the search engine. Conversely, the places that we haven't encountered—or, at least, haven't yet expressed any interest in encountering—will be harder to find.

In short, Google prefers a world where we consistently go to three restaurants to a world where our choices are impossible to predict. Judging by the changes it seeks to make to maps, Google's foray into the public space more broadly could have drastic implications.

Protesting? There's a map for that.  Consider it civilian reconnaissance. Protesters in Turkey are using Google Maps to track police movement, plot out barricades, and rally together.  Created Saturday, the map of Istanbul Police Movements centers on Taksim square, the heart of recent (and ongoing) protests against the Prime Minister Recep Tayyip Erdogan's government.

Mapping protests and police response in real-time is a relatively new phenomena. In 2010, students protesting in London used a Google Map to track police action, documenting riot vans and helicopters moving against the protesters. But some features of the Turkish protest maps are straight out of Les Misérables, such as locations of barricades that keep vehicles, police, and even horses away from the protesters.

They’re Coming for Your DNA

DNA analysis is the major crime-solving advance of our time. It’s the science behind many exonerations, and many more guilty pleas. It’s far more accurate than fingerprinting or eyewitness identification.  On Monday, the Supreme Court approved Maryland’s DNA law, ushering in a new era of massive double-helix collection.

All 50 states collect DNA from people who have been convicted of crimes, but here we’re talking about allowing states to widen their databases of genetic material to include people who have been arrested but not yet found guilty.  It was a big and unprecedented move—one that allows the government to ensnare more and more of us in a thickening web of our own data.

These days you don’t need a plastic key or wallet to unlock a hotel room, buy a mojito or snap a vacation photo. All you need is, well — you.

Technology and travel are becoming ever more fused, and arguably, the most compelling and unnerving of these technologies is biometrics — the measurement of physical or behavioral traits to verify identity.