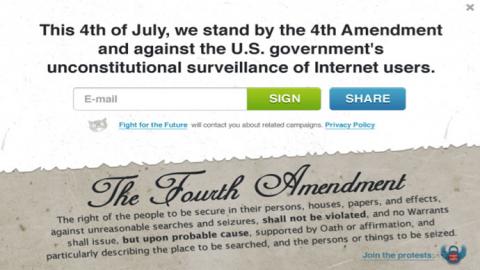 Restore the Fourth is a grassroots, non-partisan movement; we believe the government of the United States must respect the right to privacy of all its citizens as the Fourth Amendment clearly states., Restore the Fourth Amendment - http://www.restorethefourth.net/
CORRECTION: Re: The Expendables: How the Temps Who Power Corporate Giants Are Getting Crushed
Hello, I just wanted to let you know that I made the picture you have posted with the article The Expendables: How the Temps Who Power Corporate Giants Are Getting Crushed. I am one of the Walmart warehouse strikers in Elwood and I made it while we were on strike to put on leaflets we were handing out to our co-workers on the picket line. My name is Holly Kent-Payne--I'm not quite sure how the picture ended up on tumblr--probably one of my friends posted it--but there you go, that's the nature of the internet! Thanks for posting this article!
Holly Kent-Payne
The Counter-Revolution of 1776:  Slave Resistance & the Origins of the USA
On this anniversary of the birth of the nation now known as the "United States of America", take note of this revision of the heroic creation myth--foregrounding the agency and fate of the Africans--to be published by NYU Press within months (though various orders can now be taken).
Gerald Horne
===
The Counter-Revolution of 1776 - Slave Resistance and the Origins of the United States of America
The successful 1776 revolt against British rule in North America has been hailed almost universally as a great step forward for humanity. But the Africans then residing in the colonies overwhelmingly sided with London. In this trailblazing book, Gerald Horne complements his earlier celebrated Negro Comrades of the Crown, by showing that in the prelude to 1776, the abolition of slavery seemed all but inevitable in London, delighting Africans as much as it outraged slaveholders, and sparking the colonial revolt.
In the prelude to 1776, more and more Africans were joining the British military, and anti-slavery sentiments were deepening throughout Britain. And in the Caribbean, rebellious Africans were chasing Europeans to the mainland. Unlike their counterparts in London, the European colonists overwhelmingly associated enslaved Africans with subversion and hostility to the status quo. For European colonists, the major threat to security in the North America was a foreign invasion combined with an insurrection of the enslaved. And as 1776 approached, London-imposed abolition throughout the colonies was a very real and threatening possibility-a possibility the founding fathers feared could bring the slave rebellions of Jamaica and Antigua to the thirteen colonies. To forestall it, they went to war.
The so-called Revolutionary War, Horne writes, was in large part a counter-revolution, a conservative movement that the founding fathers fought in order to preserve their liberty to enslave others-and which today takes the form of a racialized conservatism and a persistent racism targeting the descendants of the enslaved.. The Counter-Revolution of 1776 drives us to a radical new understanding of the traditional heroic creation myth of the United States.
[Gerald Horne is the Moores Professor of History & African American Studies at the University of Houston. He has published over 30 books, including Negro Comrades of the Crown (NYU Press 2012).]
For Trayvon - I Will Not Remain Silent

"One must be cultured to be free."
Jose Marti