Employers are increasingly hiring workers as "on-call" employees, with no guarantee of minimum hours of work, leading to severe underemployment and scheduling difficulties. One British firm now employs almost all workers on "zero-hours contracts." The Labour Party is attempting to outlaw the practice. 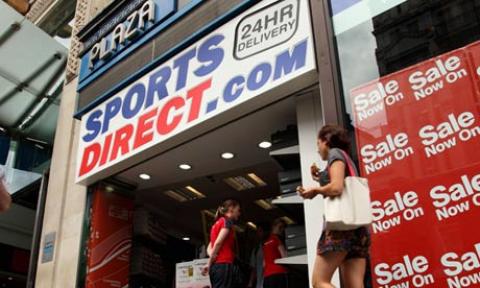 While 20,000 Sports Direct staff are on zero-hour contracts, 2,000 others are about to receive cash bonuses of up to £100,000. ,Mark Richardson/Alamy
Sports Direct's entire 20,000 part-time workforce are employed on zero-hour contracts at a time when 2,000 full-time staff are about to cash in bonuses of up to £100,000.
The contracts, handed to 90% of the company's 23,000 employees, leave staff not knowing how many hours they will work from one week to the next, with no sick pay or holiday pay, and no guarantee of regular work.
Bosses at Sports Direct, the UK's biggest sports retailer, were this month hailing their bonus policy for full-time staff as that of a model employer.
The Guardian has also discovered that the bonus scheme rules give managers the power to exclude a member of staff if they are considered an "unsatisfactory performer", although they do not precisely define this term and it could be subject to abuse, according to employment lawyers.
About 20 current staff are known to have been excluded from the scheme already, while others who had been excluded have since left, according to the Unite union.
The four biggest supermarkets in Britain, Tesco, Asda, Sainsbury's and Morrisons, said they do not use zero-hour contracts. Other retailers to confirm that they do not employ staff on these terms include Argos, B&Q, Homebase, John Lewis and Marks & Spencer.
Politicians have been campaigning to ban the contracts and have called on Mike Ashley, the billionaire owner of Sports Direct, to consider introducing part-time contracts with guaranteed hours.
Former and current part-time staff have also spoken out against zero hours, stressing the uncertainty created by the contracts, under which work can be cut with less than a day's notice. Others said regional managers may reduce staff hours if targets are not met.
Meanwhile, some staff still entitled to the bonus – which pays out in the form of shares next month – have suggested it has created a culture of fear that they may lose out if they are deemed to be "unsatisfactory".
Andy Sawford, the Labour MP for Corby, who has submitted a private member's bill to try to ban the use of zero-hour contracts, said: "It would be much better for Sports Direct to instead of offering bonus gimmicks, they should offer their staff the security of proper contracts.
"The zero-hours contracts are highly exploitative and suit the company because it keeps people in a fragile state where they are at the beck and call of their employers."
Alison McGovern, the Labour MP for Wirral South, is also campaigning for businesses to offer fewer such contracts.
She said: "It seems quite bizarre that a company would on the one hand be awarding bonuses in this way, and treating other staff in a completely different way.
"I would want Sports Direct to see if there is a possibility of more fixed term contracts. It appears this has been imposed across the board and is inappropriate. How can there be any investment in employees, or training or progression?
"Lots of workers in retail start off part-time on the shop floor and rise to the top, but with zero-hour contracts there is no incentive at all."
Some 2,000 permanent full-time staff who have been with Sports Direct since 2008 are to get a bonus paid in shares worth about £75,000 each for hitting profit targets. A similar payout, of shares worth about £17,500, was awarded last year.
Sports Direct's chief executive, Dave Forsey, told the Guardian at the time: "The share scheme glues this company together. These schemes are typically only for the executives, but this goes deep into the company. I'm surprised more businesses haven't adopted something like this sooner."
The Guardian has seen a copy of the share scheme rules, stating it is "intended to drive group performance and to motivate and retain permanent employees at all levels of the group, and to align the interests of those employees with those of shareholders".
However, the document adds that employees can be excluded from the scheme.
It says that any "participant who is determined to be an unsatisfactory performer" will not get the shares.
"For the purposes of the scheme, an unsatisfactory performer means a participant who at any time during the period between the grand date of his award and any relevant vesting date has been (a) notified in writing that his performance is unsatisfactory, or he has been given a written warning or other sanction under the company's disciplinary policy in place from time to time, or (b) suspended from his employment by reason of suspected gross misconduct."
By comparison, John Lewis, which runs one of the best-known employee bonus schemes in the country as part of its partnership structure, pays all employees a bonus regardless of disciplinary warnings against them.
Employment lawyers have said the wording is too vague and could be abused.
David Cohen, consultant solicitor at Keystone Law, said: "It is unusual under an all-employee share scheme for the directors to have the power to deprive continuing employees, as opposed to 'bad leavers', of their share awards.
"If workers generally became aware that the scheme was being operated in a capricious and arbitrary way, the company would risk frittering away the reputational and motivational advantages of putting in place such a generous scheme."
Sports Direct declined to comment.
Subscribe to Portside