Out of sheer existential necessity, then, unions have entered a period of experimentation. The fast-food campaigns that SEIU is backing won’t plausibly conclude with a contract with McDonald’s and Wendy’s. The more likely scenario is that those protesting will try to win minimum-wage increases for workers—either generally or in particular industries—at the city level, either through the vote of city councils or of voters at the polls. 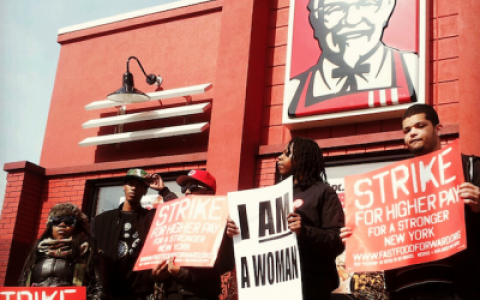 People gathered outside a Wendy's restaurant in New York City on Monday as part of a one-day strike calling for higher wages for fast-food workers. , Justin Lane/EPA/Landov
Fast-food workers in seven cities are set to walk off their jobs today in one-day actions, escalating what is quickly becoming a nationwide effort to win pay hikes in one of America’s premier poverty-wage industries. Backed by the Service Employees International Union (SEIU), the campaign is succeeding in publicizing the plight of low-wage workers in a growing number of states and cities.
How it goes about actually winning higher wages, however, remains unclear.
For its part, the AFL-CIO is preparing for its biennial convention this September, at which it will begin to hammer out some kind of formal affiliation or partnership with other, nonunion progressive organizations such as the NAACP and the Sierra Club. There are changes afoot within the union’s Working America affiliate—a Federation-run and –funded neighborhood canvass that has expanded from a purely (and brilliantly successful) electoral operation, building support for progressive Democrats among white working-class swing-state voters, to an organization bent on raising the minimum wages in selected states and cities.
The common thread in all these activities is a collective realization throughout the leadership of American labor that its traditional way of representing workers—organizing unions in workplaces—is no longer possible, at least for now. Employer opposition to worker unionization has become as predictable and routine as the sunrise, and the penalties that employers incur for violating workers’ legal right to organize are negligible. Labor’s attempts to persuade Congress to stiffen those penalties or allow workers to circumvent employer opposition to their campaigns have been mounted at least once a decade since the 1950s and have failed every time. As a consequence, union membership in the private sector is down to 6.6 percent of the workforce—a level so low that collective bargaining has effectively become extinct in America today.
Out of sheer existential necessity, then, unions have entered a period of experimentation. The fast-food campaigns that SEIU is backing won’t plausibly conclude with a contract with McDonald’s and Wendy’s. The more likely scenario is that those protesting will try to win minimum-wage increases for workers—either generally or in particular industries—at the city level, either through the vote of city councils or of voters at the polls. Nationally, there is substantial support for raising the minimum wage: A recent poll by Hart Research found 80 percent backing for raising the hourly wage to $10.10 and thereafter indexing it to inflation. Nonetheless, congressional and state legislative Republicans have been adamantly opposed to considering even more modest proposals. But some states, including California, permit cities to set their own minimum wages for some or all workers, and as cities tend to be more liberal, diverse, and unionized than states or the nation as a whole, they present targets of opportunity for groups seeking to raise the wages of workers in the retail, hospitality, home-care, and other low-pay sectors. Such efforts have occasionally succeeded; one recent stellar example, about which I write in my article on the Los Angeles Alliance for a New Economy (LAANE) in the forthcoming issue of the Prospect, saw voters in Long Beach, California, approve an initiative last November that raised the wages of workers in the city’s largest hotels.
Nonetheless, such campaigns, in the handful of places where they’ve succeeded, have taken years to build the level of community support required to prevail. In Long Beach, LAANE, working with the hotel union UNITE HERE, spent half a decade organizing in ethnic communities, among small businesses, and in every precinct of the city. Their victory confirms that such a campaign can succeed—but only after a long, comprehensive, and painstaking effort.
In a sense, the AFL-CIO’s effort to build a larger, more unified progressive force in American politics validates that model, for it comes after decades of efforts to bring together movements that once saw themselves as more opposed than aligned. Under the leadership of George Meany, the Federation’s president from its founding in 1955 until 1979, the AFL-CIO was relentlessly opposed to many of the newer social movements that arose in the 1960s and 1970s and battled labor in intra-Democratic Party fights. A handful of unions—AFSCME, the UAW, the Machinists, SEIU, and the Amalgamated Clothing and Textile Workers—welcomed 1960s radicals into their ranks; most reviled them as un-American or worse. Over the years, the antagonism between labor and the ranks of middle-class liberals, environmentalists, and feminists waned, but it wasn’t until John Sweeney became president of the AFL-CIO in 1995 that the Federation fully embraced the other tribes of progressive America.
Still, if some larger, more omnibus progressive organization begins to emerge at the AFL-CIO’s upcoming convention, it won’t be the result of some irresistible kumbaya impulse. It will be the outcome of a series of calculations that labor by itself is becoming too small and weak to have a positive impact on American workers’ lives, that the very act of representing the interests of the American working class has to be transformed if that class is to be represented at all.
In fast-food joints and at the highest levels of union leadership, American labor is sailing into uncharted waters. To remain where it is, its leaders are convinced, is to die.
Harold Meyerson is editor-at-large at The American Prospect and a columnist at The Washington Post.