Dispatches from the Culture Wars - Demographics are Destiny edition 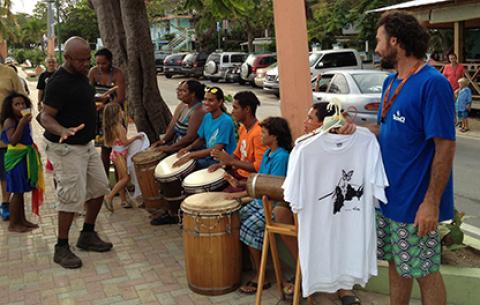 During a June fundraising event for Radio Vieques, a local ensemble performed traditional bomba music, while a station organizer sold t-shirts designed by Puerto Rican artist Rafael Trelles., Current.org / Radio Vieques
Radio Vieques Activates in Demilitarized Zone
By Erica Sánchez-Vázquez
July 25, 2013
Current.org
Activists on the Puerto Rican island of Vieques have renewed hope for launching a community radio station after getting a fundraising boost from allies in their community and on the U.S. mainland.
The station's lineup will deal with causes of concern to CPRDV, including the lasting economic and environmental effects of the U.S. Navy's military and bomb-testing exercises on the island, which began in the 1940s. But programs will also examine other issues affecting residents, such as gun violence, drug trafficking, a shortage of health-care facilities and a deficient transportation system, said Robert Rabin, spokesperson for Radio Vieques.  "The idea is that the station will be useful to the community and to people's daily lives."
Activists, local government and federal agencies are still working to clean up parts of the former military zone and to develop the local economy. The station's founders hope to advance the cause by creating a space for dialogue and information for and by residents.
Univision Claims Title as Top Prime Time Television Network
By Kurt Wagner
July 23, 2013
CNN Money
Univision is having a summer romance with viewers. Or maybe it's the other way around. The U.S.-based Spanish-language television network announced on Tuesday that it is on pace to finish the month as the most-watched primetime network in the country. After finishing fourth in the February sweeps, Univision expects to finish as the top primetime network for adults age 18-49 and 18-34, regardless of gender or language. The network's Los Angeles (KMEX) and New York (WXTV) stations are set to finish in the top two spots respectively in both age groups.
More Latinos Consume News in English, Report Finds
By Tanzina Vega
July 23, 2013
New York Times
An increasing number of Hispanics in the United States are getting their news in English, according to a report released on Tuesday by the Pew Hispanic Center.  Eighty-two percent of Latino adults surveyed said that at least some of the news they followed in 2012 was in English, an increase from 78 percent in 2006. Nearly a third of Hispanics, 32 percent, said they got their news exclusively in English, according to the report, compared with 22 percent in 2006. At the same time, the consumption of Spanish news decreased among Hispanic adults, with 68 percent saying they got some of their news in Spanish, compared with 78 percent in 2006.
Part of what is driving these changes is the shifting demographics among the 52 million Latinos in the United States. Immigration of Hispanics to the United States is slowing, and more of the Latino population was either born or raised in the United States, increasing the level of English fluency. More than half of the adult Latino population in the United States, 59 percent, speaks English proficiently.
Latino Group Launches Advocacy Effort for Smithsonian Museum
August 1, 2013
The Chronicle of Philanthropy
An advocacy organization kicked off an effort Wednesday to press for congressional approval of stalled plans for a Smithsonian museum dedicated to the history of Hispanics in the United States, reports the Associated Press.
Friends of the American Latino Museum is raising money for a campaign urging Congress to pass legislation authorizing the Smithsonian to build the museum in its Arts and Industries Building on the National Mall, which hasn't been used for years because of structural issues. Estuardo Rodriguez Jr., the advocacy group's executive director, said it would have to collect at least $325-million in private donations for the project if it is approved by Congress.
Cheryl Boone Isaacs Chosen to Head Film Academy
By Michael Cieply
July 30, 2013
New York Times
Cheryl Boone Isaacs, a veteran film marketer, was named president of the Academy of Motion Picture Arts and Sciences, the Academy said on Tuesday. Ms. Isaacs is the first woman to hold the Academy's presidency since Fay Kanin, who was president from 1979 to 1983, and is the first African-American to serve as president in the group's 86-year history. She previously held various Academy offices, and was most recently the group's first vice president.