The AFL-CIO is discussing “the next stage” in alternate formations and there “will be some limited, thoughtful experiments in different places through various affiliates.” The AFL-CIO also plans to support an ambitious multi-union effort to organize in Texas. “The AFT has come to us and said, ‘We want you to convene other unions to make a long-term investment in Texas and we’re going to do it.” 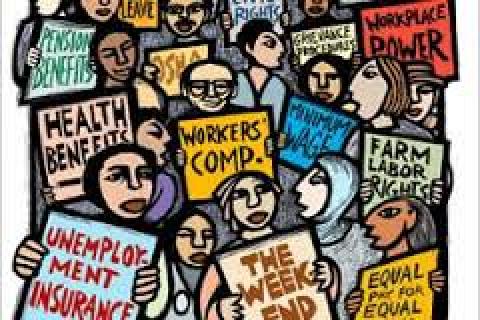 The AFL-CIO is exploring new investments in alternative labor organizing and a multi-union effort to transform Texas, according to the union federation’s general counsel.

“There is a lot of interest in exploring non-traditional forms of membership, but also some reasonable skepticism about it,” AFL-CIO General Counsel Craig Becker told The Nation in an interview in his Washington, DC, office last week. “What can they actually deliver? Can they be self-sustaining?…I think people within the AFL are at different places on it.”

Becker, who served as a member of the National Labor Relations Board during President Obama’s first term, currently oversees an “Initiative on the Future of Worker Representation,” one of several venues for soul-searching in the lead-up to the AFL-CIO’s quadrennial convention next month in Los Angeles. As I’ve reported, the past two decades have seen an explosion in the number of “alt-labor” groups organizing and mobilizing workers outside of traditional union representation or bargaining; such groups currently mostly rely on union or foundation funding. “I think our sense is those organizations are leading to collective bargaining,” said Becker. “Either in a more direct sense, like they’re building within a particular employer or industry, or in a more expansive sense.”

Becker said that members of the union-backed non-union group OUR Walmart have “shown that they do have some power. You can have strikes—they’re not the kind of strikes which close the employer and which lead to a collective bargaining agreement, but they are strikes which dramatize what’s happening in the workplace, which draw attention, and which create positive results.” Becker also noted the Communications Workers of America’s use of alternative organizational structures against the telecom giant T-Mobile, the American Federation of Teachers’ (AFT) organizing in states that deny public employees collective bargaining and the work of the AFL-CIO’s non-union affiliate Working America.

Becker said he hopes “the next stage” in the AFL-CIO’s work with such formations “will be some limited, thoughtful experiments…. Try it in different places through Working America, [and] through various affiliates” of the AFL-CIO. Would such efforts be backed by a dedicated funding source within the AFL-CIO? “I think,” said Becker, “that’s a question which will be answered to a large extent at the convention.”

Becker also told The Nation that the AFL-CIO plans to support an ambitious multi-union effort to organize in Texas. “The AFT has come to us and said, ‘We want you to convene other unions to make a long-term investment in Texas,” said Becker. “We’re going to do it.” Citing “the demographics and potential political change,” Becker added that “there’s a long-term strategic possibly, if we can bring enough unions into that arena, which could be really extraordinary both politically and organizationally.” Becker described a joint focus on Texas as an example of the federation’s role in organizing: Given that “We don’t have centralized power” over affiliated unions, “We have to create a discussion which facilitates a conclusion that we have to work together in a systematic way in places that make sense.”

Becker identified a few “central pieces which are on the table” in the lead-up to the quadrennial convention: support for alternatives to traditional collective bargaining; the federation’s role in coordinating union leverage and resources; and the AFL-CIO’s relationship with other progressive groups. Pre-convention stories in The Wall Street Journal and elsewhere have focused on the AFL-CIO’s talks with groups like the NAACP and the Sierra Club about deepening their relationship, perhaps through some formal affiliation that would involve a role for such allies in AFL-CIO decision-making.

“There is a very legitimate position within the labor movement that we’re a democratic organization, we’re controlled by our members, our members pay dues—that’s who should control our organization,” said Becker. “And that at some fundamental level is clearly true, and [AFL-CIO President] Rich [Trumka] has no issue with that of course. But you know, if we want to serve our members, you have to have some more deep and continuing relationship with your allies.”

Asked about concerns over the prospect of the AFL-CIO extending decision-making authority to allies like the National Council of La Raza that accept contributions from AFL-CIO enemies like Walmart, Becker said, “I think all of those are reasonable concerns.” Given that these groups “have their own institutional concerns, one of which is they need to raise money,” he added, “all of those things have to be thought about.”

What will the various proposals coming from the AFL-CIO’s pre-convention process—including the initiative overseen by Becker, larger listening sessions and committees composed of leaders from within and outside the AFL-CIO—mean for how the federation spends its still-declining budget? Becker said that question was a live topic in the pre-convention committees and would be discussed in Los Angeles. “We’ll see,” he added, “but I think the convention will at least give a certain direction. Broad direction.”