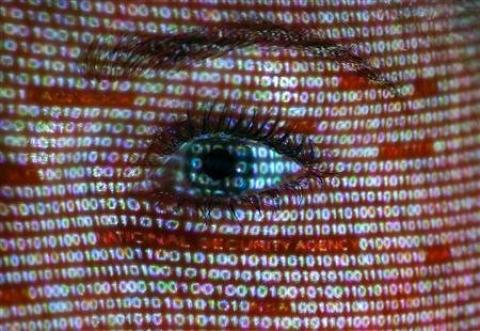 File illustration picture shows a projection of a text on the face of a woman in Berlin, June 12, 2013., Yahoo News! / REUTERS/Pawel Kopczynski/Files
NSA Paid Millions to Cover Prism Compliance Costs for Tech Companies
By Ewen MacAskill
August 22, 2013
The Guardian (UK)
The National Security Agency paid millions of dollars to cover the costs of major internet companies involved in the Prism surveillance program after a court ruled that some of the agency's activities were unconstitutional, according to top-secret material passed to the Guardian.
Documents passed to the Guardian by whistleblower Edward Snowden provide the first evidence of a financial relationship between the tech companies and the NSA. An NSA newsletter entry, marked top secret and dated December 2012, discloses the huge costs this entailed. The disclosure that taxpayers' money was used to cover the companies' compliance costs raises new questions over the relationship between Silicon Valley and the NSA.
Here's How Privacy Advocates Shined Light on the NSA's Unconstitutional Surveillance
By Andrea Peterson
August 22, 2013
The Switch/Washington Post
After a legal battle that went on over a year spearheaded by the Electronic Frontier Foundation, the Freedom of Information Act lawsuit forced the federal government to reveal a Foreign Intelligence Surveillance Act Court (FISC) opinion that showed the National Security Agency (NSA) engaged in unconstitutional surveillance practices, including the collection of tens of thousands of Americans' online communications.
The Switch talked to Mark Rumold, a staff attorney at the Electronic Frontier Foundation (EFF) who worked on the case, hours after the opinion was released.
Koch Brothers Lose Interest in Tribune Papers
By Roger Yu
August 22, 2013
USA TODAY
The Koch brothers have dropped their controversial pursuit of Tribune Co.'s newspapers.
The billionaire brothers, known for their generous support of conservative causes, conducted a due diligence assessment of the eight daily newspapers that Tribune has put up for sale, including the Los Angeles Times and Chicago Tribune. But they concluded that a deal wasn't financially viable.
Meanwhile, Tribune, which emerged from bankruptcy protection last December, will likely proceed with its plans to spin off its publishing unit as a separate company to focus more heavily on its TV business.  Tribune Co. will retain its 42 local television stations (following the close of its acquisition of Local TV), WGN Radio, WGN America cable channel and other broadcast and digital properties.
FCC Chairman Puts End to 10 years of Sky-high Prison Phone Rates
By Malkia Cyril
August 15, 3013
The Hill
After 10 years of delayed justice, on Aug. 9 Acting Chairman Mignon Clyburn ended the Federal Communications Commission's (FCC) abysmal record on interstate prison phone rates. The new rates and rules passed by the FCC will dramatically reduce the cost of interstate calls from prison and jails, keeping nearly 3 million children connected with their incarcerated parents.
This vote doesn't just ease the financial burden on families of incarcerated loved ones.
Research demonstrates that keeping families connected reduces the return rate to prison, is fiscally responsible, strengthens families and keeps communities safer. This is an incredible victory for Clyburn and the 90,000 Americans who called upon the FCC to lower interstate prison phone rates in the last year, including over 1,700 handwritten requests from prisoners. But this vote does not protect the hundreds of thousands of prisoners and their families who rely on in-state calls to stay connected, or the unique needs of the deaf and hard of hearing community, who require videophone.
Facebook for All
By Kevin Taglang
August 23, 2013
Benton Foundation
Increasing Internet access around the world was one of the hot stories of the week. On August 21, Facebook Founder and CEO Mark Zuckerberg announced the launch of Internet.org, a partnership with the goal of making Internet access available to the next 5 billion people. Today, just over one-third of the world's population (2.7 billion people) have access to the Internet -- Internet.org aims to make access available to the two-thirds of the world population who are not yet connected.
Internet.org members include Facebook, Ericsson, MediaTek, Nokia, Opera, Qualcomm and Samsung. They've pledged to develop joint projects, share knowledge, and mobilize industry and governments to bring the world online. Down the line, the partnership is expected to expand to include nonprofit organizations, academics and other experts. They will focus on three challenges:  Making access affordable; Using data more efficiently; Helping business drive access.
The effort is a reflection of how tech companies are trying to meet Wall Street's demands for growth by attracting customers beyond saturated markets in the United States and Europe, even if they have to help build services and some of the infrastructure in poorer, less digitally sophisticated parts of the world.
Of course, Internet.org is not the only effort to expand Internet access either globally or here in the U.S. Altruism is likely a factor in the Internet-for-all initiatives. But there's a strong business case, too: As the gateway to the Web for billions more people, each company could develop a loyal base of new users. They don't want to share.