No War with Syria!

The first step would be for Washington to put intense pressure on Saudi Arabia, the Arab states of the Persian Gulf, and Turkey, to halt the flow of weapons to the Syrian rebels, while simultaneously getting Russia and Iran to do the same. A concerted, worldwide diplomatic effort along those lines could work, but there’s zero evidence that President Obama has even thought of that. 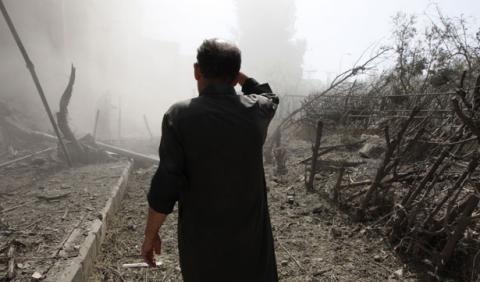 Here's the core question now, in regard to Syria: If it's true that President Bashar al-Assad's government used poison gas in an incident that killed hundreds of people, at least, in the suburbs of Damascus, can the United States avoid military action in response? The answer is: yes. And it should.

That doesn't mean that the United States ought to do nothing. The horrific incident, reported in detail by Doctors Without Borders, demands action. But the proper response by the United States is an all-out effort to achieve a cease-fire in the Syrian civil war. It's late in the game, but it can be done. The first step would be for Washington to put intense pressure on Saudi Arabia, the Arab states of the Persian Gulf, and Turkey, to halt the flow of weapons to the Syrian rebels, while simultaneously getting Russia and Iran to do the same. A concerted, worldwide diplomatic effort along those lines could work, but there's zero evidence that President Obama has even thought of that.

Indeed, it seems clear now that the United States is about to launch a series of cruise missile strikes against Syrian targets, including military command centers, airports, and other facilities. A US naval buildup in the eastern Mediterranean, off the coast of Syria, is underway, including four destroyers carrying cruise missiles. Ominously, the United States yesterday rejected as "too late" a Syrian offer--which, indeed, may have been disingenuous--to allow United Nations inspectors to visit the site where the gas was reportedly used. Virtually the entire Obama administration national security team huddled in the White House yesterday to decide what to do about Syria.

Obama, meanwhile, is busy building a "coalition of the willing" to back an American attack on Syria, calling the leaders of Britain and France, rallying support in Eastern Europe, NATO and the Arab League, and of course getting strong support from Saudi Arabia and Israel. The latter two countries see an attack on Assad's forces as a proxy for an attack on what they consider their main enemy, Iran.

The Wall Street Journal reported that, meanwhile, the Obama administration is crafting legal justifications for unilateral action, perhaps under the umbrella of NATO and Arab League support, a la Libya 2011 (or Kosovo in 1999):

Administration lawyers have been crafting legal justifications for an intervention without U.N. approval that could be based on findings that Mr. Assad used chemical weapons and created a major humanitarian crisis.

At this point, if the United States bombs Syria, it will be mostly an emotional and reactive attack designed to protect President Obama's right flank, because ever since he said that a chemical weapons attack would be a "red line" that would "change [his] calculus," he's been pilloried for holding off. And in addition--at the exact wrong moment, given Iran's newfound moderate tone and a new president, Hassan Rouhani, who appears to be looking for an end to the confrontation over Iran's nuclear program--Obama would be bombing Iran's main ally, strengthening the hand of hardliners in Tehran and undermining Rouhani's room for maneuver.

And to what end? As General Martin Dempsey has outlined at length, in a letter to members of Congress and in testimony and speeches, there's no obvious alternative to Assad yet. There's no government-in-exile, and Al Qaeda types and radical Islamists of all kinds dominate the rebel movement.

Lost in the apparent tumble down the slippery slope to war is the question of why Assad would use chemical weapons now, given the near-certainty that it would provoke US action, since his forces have made major gains in the last two months or so. That's a point made by Assad himself, in an interview with Russia's Izvestia:

"Would any state use chemical or any other weapons of mass destruction in a place where its own forces are concentrated? That would go against elementary logic. So, accusations of this kind are entirely political and the reason for them is the government forces' series of victories over the terrorists."

It seems clear that the weapons were used, perhaps--if not by Assad's own decision, by a military commander who took it upon himself to do so. Maybe we'll never know, and it will be lost in the fog of war.

But it's clear that both Israel and Saudi Arabia want war, and Israel's Benjamin Netanyahu says it's all about Iran. Reports the Times:

"This situation must not be allowed to continue," Prime Minister Benjamin Netanyahu said, referring to the Syrian civilians "who were so brutally attacked by weapons of mass destruction."

Some Israelis have argued that international intervention in Syria would distract the world from the crucial effort to prevent a nuclear Iran. But there is a growing sense among Israelis that Syria is now a test of how the world might respond to Iran as it approaches the ability to make a nuclear weapon.

An attack on Syria could easily spiral out of control in full-scale war. As The Wall Street Journal reports, citing the apparently dwindling administration contingent still urging caution:

Officials cautious of intervening say targeted strikes to punish Mr. Assad for using chemical weapons risk triggering a bloody escalation. If the regime digs in and uses chemical weapons again, or launches retaliatory attacks against the U.S. and its allies in the region, Mr. Obama will come under fierce pressure to respond more forcefully, increasing the chances of full-scale war, the officials say.

And, of course, Russia--which has declared that it won't support an American action against Syria--could up the ante, too, by backing Assad more powerfully in response.