Britain's Bump in the Road to War

Last night David Cameron’s government lost a House of Commons vote on a measure designed to approve—-in principle-—military action in Iraq pending a report from UN weapons inspectors. This was the first defeat of a government motion related to military action in modern times. The UK Parliament voted—-what about US Congress? 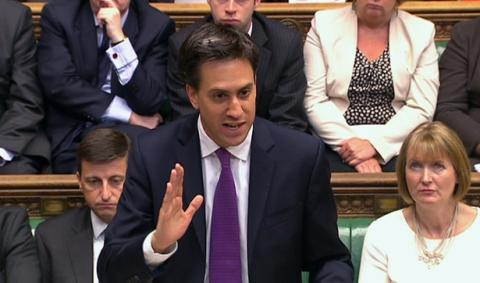 London—So it turns out someone was paying attention after all. Earlier this week, as Britain and the United States looked like they were about to drift into yet another war with no clear justification, no defined objectives, and no exit strategy just to save President Obama from looking unmanly over his “red line,” the conventional wisdom, both here and in the United States, was that while the fig leaf of a “UN moment” might be required, there were no serious obstacles on the road to war.

Yet last night David Cameron’s government lost a House of Commons vote on a measure designed to approve—in principle—military action in Iraq pending a report from UN weapons inspectors. This was the first defeat of a government motion related to military action in modern times. And even the failed measure was a climbdown from earlier proposals which would have simply authorized a military response, putting Britain once again shoulder to shoulder with the United States.

Perhaps the most surprising thing about David Cameron’s defeat was that the insurmountable obstacle on his glide path turned out to be Ed Miliband, leader of the Labour Party, who after a summer of continual derision in the British press—and a barrage of friendly-fire briefings by his own MPs—suddenly seems to have found his missing mojo on, of all things, a matter of principle.

How much does Cameron’s defeat by Miliband matter? Well, thirty Tory MPs voted against the government. (Another thirty-one abstained). Nine Liberal Democrats also rebelled against their leader. (And fourteen more abstained) Meanwhile 220 Labour MPs held firm, though interestingly it was the Tory rebels who offered many of the most compelling arguments against rushing to war.

David Davis, who led the fight against the last Labour government’s proposal for mandatory identity cards, said: “We must have clear evidence to show this House that if there is a casus belli [justification for war], it’s real, not confected, not constructed, and that means perhaps a more aggressive disclosure of intelligence than we would normally have.” John Redwood, another former Tory leadership contender—and very much on the right of his party—asked, “How many soldiers and managers of soldiers and officers would you need to kill in order to guarantee that Assad will not do it again? I fear when you have someone as mad and bad as Assad, the answer might be very high. The question is would we want to do that much, are we sure it will work?”

Miliband was careful to say he was “not with those who rule out action,” leaving himself plenty of wiggle room to should the UN weapons inspectors conclude that poison gas was used and (a key difference between his position and Cameron’s) if compelling evidence is made available showing that Assad’s government, rather than the rebels, was to blame. But for the moment Miliband’s determination not to be hustled into hostilities has implications for both Westminster and Washington.

In Westminster the howls of outrage from the Tories—Defense Secretary Philip Hammond accused Miliband of giving “succor” to the Assad regime; another government source told the Times that Cameron and the Foreign Office “think Miliband is a fucking cunt and a copper-bottomed shit”—suggest that Downing Street realizes just how badly its claims to political competence have been damaged.

The same source’s suggestion that “the French hate him now” will do Miliband no harm—and may even help Labour with voters tempted by the isolationist United Kingdom Independence Party, whose leader, Nigel Farage, said, “We are a country tired of fighting wars that have nothing to do with us. MPs must listen to the people who have stated they are opposed to our involvement in Syria.”

What about the government claim that by derailing, however temporarily, the British-American war machine Miliband now has “no chance of building an alliance with the US Democratic Party?” There are worse fates, but really that depends on what Barak Obama does next. As the New Yorker’s John Cassidy points out, “Americans are almost as skeptical of military action as Britons are.” Thanks to Ed Miliband, people here now have what we were never given in the run-up to war in Iraq—a government that has been forced, at least for the moment, to consider the depth of popular opposition to war and to advance arguments and evidence to change the debate. That’s how democracy is supposed to work. Perhaps Barack Obama will seize this imposed detour to give Americans the same opportunity.

The UK Parliament voted—what about US Congress?