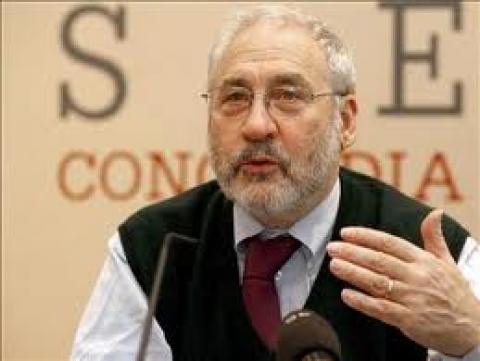 The following is taken from a transcript of Joseph Stiglitz's remarks to the AFL-CIO convention in Los Angeles on September 8.

I'm an economist-- I study how economies work and don't work. It’s been clear to me that our economy has been sick for a long time.  One of the reasons it's been so sick is inequality, and I decided to write an article and a book about it.

Two years ago, I wrote an article for Vanity Fair called, "Of the 1%, by the 1%, for the 1%,” which really got to the gist of it.  For too long, the hardworking and rule-abiding had seen their paychecks shrink or stay the same, while the rule-breakers raked in huge profits and wealth.  It made our economy sick, and our politics sick, too.

You all know the facts:  while the productivity of America's workers has soared, wages have stagnated. You've worked hard – since 1979, your output per hour has increased 40%, but pay has barely increased. Meanwhile, the top 1% take home more than 20% of the national income.

More than 20 million Americans who would like a full time job still can't get one, incomes are still lower than they were a decade and a half ago, wealth in the middle is back to where it was two decades ago. Young Americans face a mountain of student debt, and dismal job prospects.

We have become the advanced country with the highest level of inequality, with the greatest divide between the rich and the poor.  We use to pride ourselves--we were the country in which everyone was middle class.  Now that middle class is shrinking and suffering.

The central message of my book, The Price of Inequality, is that all of us, rich and poor, are footing the bill for this yawning gap.  And that this inequality is not inevitable.  It is not, as Rich said yesterday, like the weather, something that just happens to us. It is not the result of the laws of nature or the laws of economics. Rather, it is something that we create, by our policies, by what we do.

We created this inequality—chose it, really—with laws that weakened unions, that eroded our minimum wage to the lowest level, in real terms, since  the 1950s, with laws that allowed CEO's to take a bigger slice of the corporate pie, bankruptcy laws that put Wall Street’s toxic innovations ahead of workers. We made it nearly impossible for student debt to be forgiven. We underinvested in education. We taxed gamblers in the stock market at lower rates than workers, and encouraged investment overseas rather than at home.

Let us be clear:  our economy is not working the way a well working economy should.  We have vast unmet needs, but idle workers and machines.  We have bridges that need repair, roads and schools that need to be built.  We have students that need a twenty-first century education, but we are laying off teachers.  We have empty homes and homeless people.  We have rich banks that are not lending to our small businesses, but are instead using their wealth and ingenuity to manipulate markets, and exploit working people with predatory lending.

It is plain that the only true and sustainable prosperity is shared prosperity. If we could ensure that everyone who wanted a job and was willing to work hard could get one, we could have an economy and a society that is both more equal and more prosperous.

To achieve that we need to grow our economy. But we can't do that when paychecks aren’t growing, and while insecurity is growing, with looming cuts to medicare and social security.

If we have regulators or a Fed chief who  protect the bankers’ jobs and bonuses rather than  jobs and rights for all Americans, we won’t achieve it.

We won't achieve it through mindless cutbacks in public spending, whether in schools, hospitals, police, or firemen.  These are ways to keep our economy sick.  And an economy in which 95% of the growth goes to the top 1% can only be called that: sick.

What we do need is investment in our future — in education, technology and infrastructure.

And our problems are deeper than weak growth. We are losing the ability to call ourselves the land of opportunity.  It used to be that what an American could achieve in life was a result of how hard she or he worked. Today, it depends a lot more on the family we are born into – their income and educational attainment. And it’s worse in America than in almost any other advanced country.  We are losing the American dream.

If we became the land of opportunity again, we could find our way to being more equal, more dynamic, more prosperous, and fairer.

But to achieve this we need markets to work like they are supposed to. We can’t let monopolists and the 1 percent use their power to siphon off more of the country’s income -- away from ordinary Americans .

Our democracy is in peril.  With economic inequality comes political inequality We have a Supreme Court that declares that corporations are people and should have unchecked rights to spend money  to influence politics.  Our unions are being curbed. Rather than a people’s government, we are becoming a government of the 1%.

On paper, we may still uphold equality and the principle of one person-one vote. In reality, some voices are heard more loudly — much more loudly — than others. As a result, we have heard far too much from Wall Street, not enough from Main Street and America's workers.

Rather than justice for all, we are evolving into a system of justice for those who can afford it.  We have banks that are not only too big to fail, but too big to be held accountable.

It will only happen when workers realize that they own much of our country’s capital, through the pension funds, but that we have allowed this capital to be managed in ways that exploit workers and consumers alike.

The challenge facing you has seldom been greater.  You are still a small fraction of America.  But you are the largest group representing the vast majority of Americans who work hard and play by the rules.  .

Joseph Stiglitz, a Nobel laureate, is a professor of economics at Columbia University.