At Labor Group, a Sense of a Broader Movement

'... how are we going to translate that energy to work on the ground, to spread that energy through the locals?' 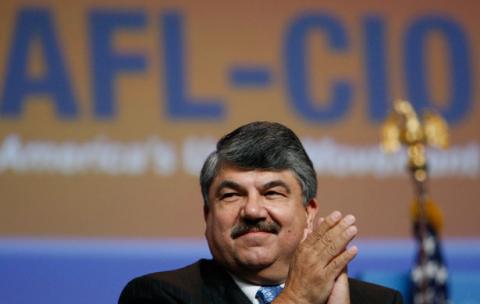 As soon as the delegates to the A.F.L.-C.I.O.’s convention entered the hall, they encountered a booth where three 20-somethings were teaching labor leaders more than twice their age how to use Facebook and Twitter. Behind the booth was a sign saying, “Online Strategies that Rock the Movement.”

At the center of the welcoming hall, brilliantly colored 10-foot-tall posters of workers and union slogans towered over the convention delegates. One giant orange-and-yellow poster resembled an oversize woodcut, showing a farmworker hunched over a wheat field with bold letters, saying, “Workers Are the Backbone, Not the Blame.”

All this was a far cry from the dark, drab, lugubrious scenes found at many union gatherings of the past. After decades of decline, the energy and focus — and, yes, the artwork — at this week’s A.F.L.-C.I.O. convention signaled, as one union president put it, “our need to put some movement back in the labor movement.”

For the delegates at the convention, which ended on Thursday, there was a burning realization that the status quo was not working for the nation’s labor unions. Wages for union and nonunion workers alike have flatlined in recent years, while the percentage of private sector workers in unions has slipped to just 6.6 percent. That is less than one-fifth the level during organized labor’s prime, when union leaders were confidants of presidents and the mighty Teamsters threatened strikes that could cripple much of the nation’s commerce.

Desperate to figure out how to stop labor’s descent, the A.F.L.-C.I.O., a federation of 57 labor unions, invited scores of nonunion groups, including the National Organization for Women, United Students Against Sweatshops and Arts and Democracy, to the four-day convention to brainstorm. They debated how to shore up the sagging labor movement, how to raise wages and how to persuade Congress to pass legislation that would help 11 million undocumented immigrants gain citizenship.

Even the use of art as an inspirational tool was discussed. The convention’s motto — “Dream, Innovate, Act,” festooned in multicolor signs around the hall — seemed like something one would expect from a dance troupe and not an often plodding movement lacking in imagination.

At times the convention seemed like a mass group therapy session, with a consensus reached that major changes were needed — and soon.

“Everyone has come to the realization that we need more partners, that we got to rebuild the movement, that we have faced all these vicious attacks,” said Lee Saunders, president of the American Federation of State, County and Municipal Employees, which is still reeling from when Wisconsin curbed collective bargaining for most public employees in 2011. “Maybe it takes a bat to your head, but people get it now. People are engaged.”

Inside the convention hall, there was a sea change in rhetoric. Gone was talk about fighting for only the 11 percent of workers — bricklayers, steelworkers and seafarers — who still belong to labor unions. “At the end of the day,” said Richard Trumka, the A.F.L.-C.I.O’s president, “it’s on us to build a movement not for the 99 percent but of the 99 percent. Not just the 11 percent we are right now.”

The election of Bhairavi Desai, executive director of the New York Taxi Workers Alliance, to the federation’s executive council, was cited as another example of labor’s efforts to broaden its base. She is the first official from a workers center, a nonunion group that battles for immigrant workers, to sit on the council.

In a move aimed at reaching out to immigrants, the delegates elected a refugee from Ethiopia, Tefere Gebre, as the labor federation’s No. 3 official, its executive vice president.

Mr. Gebre, 45, who fled war in Ethiopia at the age of 14 and arrived in California the next year, won a track scholarship to college and ultimately became head of the Orange County Labor Federation. He transformed it into a political powerhouse that helped make a county famous for Richard Nixon far more Democratic.

Dozens of outside groups attended the convention, in part to lend the struggling labor movement a hand, in part to plug into the considerable power and reach that organized labor still has. There were leaders of more than a dozen immigrant worker centers, including ones from Louisiana, New York, Washington State and Texas. Numerous professors attended to share their insights, and union leaders from Bangladesh, Myanmar and Nigeria also visited.

Terry O’Neill, president of the National Organization for Women, voiced support for labor’s efforts to reinvent and reinvigorate itself.

“We have to stop telling women that they have to lean in as individuals,” she said. “We have to tell them there is a whole system here that you have to lean together with your brothers and sisters, we have a whole movement here to put the United States on the right track.”

Some antiunion groups were quick to criticize the A.F.L.-C.I.O.’s push to reinvent itself and expand its base. J. Justin Wilson, managing director of the Center for Union Facts, a business-backed group, said labor’s effort to partner with worker centers and progressive groups like the N.A.A.C.P. and the Sierra Club had “more to do with gaining national political clout than advancing the interests of individual members.”

Despite so much talk of unity here, divisions simmered close to the surface. Last month, the International Longshore and Warehouse Union, which represents West Coast dock workers, quit the A.F.L.-C.I.O., complaining that the federation was not paying enough attention to it and had not stopped another union from raiding it.

Two of the nation’s largest unions — the Teamsters and the Service Employees International Union — did not attend because they quit the A.F.L.-C.I.O. eight years ago, although several other unions, including the laborers, Unite Here and the United Food and Commercial Workers, which had earlier severed ties, have rejoined.

Many delegates said they felt inspired — but they acknowledged that spreading their energy and urgency to union officials and locals across the country might not be easy. “This is a new, energized and focused labor movement — it has a more youthful energy,” said Ms. Desai of the taxi workers’ alliance. “But my concern is, how are we going to translate that energy to work on the ground, to spread that energy through the locals?