While some of us have been sleeping (metaphorically speaking) Republican senators have been slipping into the White House and over repasts possibly working with Administration staffers on a new version of “Simpson-Bowles." 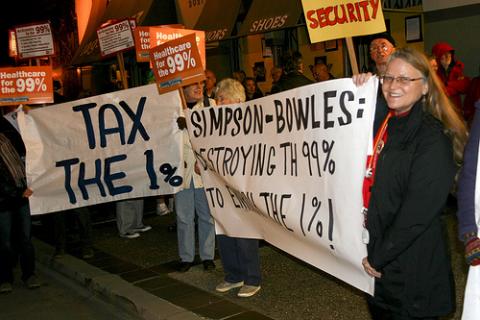 According to Erskine Bowles and Alan Simpson, “earlier this year,” President Obama hosted an unspecified number of “dinners” involving unnamed Republican members of the U.S. Senate and these “social events” were “an important and long overdue effort at building the understanding” critical to coming up with a “bipartisan agreement” on the Federal budget along the lines the two men have been advocating for some time now. The talks, they say, “have led to discussions between senior White House staff and Republican senators about the budget and replacing the mindless, across-the-board cuts in defense and domestic programs (known as sequestration) with smart, selective cuts.”

These cuts, it should be recalled, involved principally reducing the resources allocated to Social Security and Medicare.

Anyone who thought that the danger had passed of Washington politicians hatching a “grand bargain” undermining these two essential social programs better think again. While some of us have been sleeping (metaphorically speaking) Republican senators have been slipping into the White House and over repasts possibly working with Administration staffers on a new version of “Simpson-Bowles.”

The plan is being touted by its backers as “new” because Simpson, a former Republican senator from Wyoming, and Bowles, a member of the board of directors of General Motors and Morgan Stanley, have “revised” their original scheme. In their opinion column in the Christian Science Monitor September 16 they made clear that their new plan goes “further than many Democrats have been willing in reforming costly entitlement programs that are driving long-term debt, particularly health care.

They wrote that the plan “would, for instance, move away from Medicare’s fee-for-service delivery system and gradually increase the eligibility age” and “require Republicans to accept more revenues beyond the expiration of the 2001 upper-income tax cuts agreed to in January.” The Monitor op-ed doesn’t contain the words “Social Security” probably because of the difficulty in sustaining the fiction that the program contributes to the budget deficit.

“Both sides would have to go beyond their political comfort zones to reach a real budget deal,” declared Simpson and Bowles. “But the end result would put the debt on a downward trajectory for the long term.”

In their minds the chief obstacles to reaching the elusive “grand bargain” are not so much the details but “the sad lack of trust” between the two major political parties and that’s what the White House “socials” were intended to overcome.

This drive to drastically alter Social Security and Medicare in return for some still yet unspecified tax “reforms” got started in 2010 when President Obama bought into the notion that a chief problem facing the nation was the federal budget deficit and in a serious lapse of good judgment appointed Simpson and Bowles to head an 18-member National Commission on Fiscal Responsibility and Reform to identify "…policies to improve the fiscal situation in the medium term and to achieve fiscal sustainability over the long run." The idea behind the creation of the commission was that if its “bipartisan” members could agree their recommendations would be placed before Congress and with little or no debate be voted up or down. That way neither party could accuse the other of undermining working people’s retirement security or limiting their access to healthcare.

While the commission was in operation Simpson outraged seniors across the country when he compared Social Security to “a milk cow with 310 million tits!"

The panel became widely referred to as the “Catfood Commission,” a reference to seniors reduced to consuming pet food in order to survive.

The commission staff came up with a report but the commissioners were divided. It failed to get the stipulated 14 votes needed for approval and was never even formally voted upon. Undeterred, in December of that year the commission co-chairs released the recommendations in their own name and this was born what the major media now refers to as simply “Simpson-Bowles.”

The current Congressional conflict over the Federal Budget and the threat by Republicans to bring the government to a near halt by refusing to raise the debt ceiling has set the stage nicely for the resuscitation of “Simpson Bowles.” A plethora of committees and front groups back by Wall Street interests like rightwing hedge fund billionaire, Pete Peterson are flying into action.

“Clearly the austerity crowd’s goal is to, ‘never let a crisis go to waste,’ and they’re determined to cut benefits to middle class Americans who depend on Social Security and Medicare...regardless of the fiscal facts,” says the National Committee to Preserve Social Security and Medicare. “The truth is, our nation still faces a system-wide healthcare crisis. Obamacare is a good start but we need to finish the job of bringing down the high cost of healthcare in America, not just in Medicare but in our private system.”

“Most people in the United States have probably heard about the Wall Street efforts to cut Social Security and Medicare,” wrote economist Dean Baker in Aljazeera last week. “There is a vast list of organizations such as Campaign to Fix the Debt, the Can Kicks Back, Third Way, and many more that have, as a central agenda item, cutting back or privatizing Social Security and Medicare. When we hear one of these organizations tell us these programs should be cut it is not a surprise.

“The question is why do mainstream news outlets including the New York Times and Washington Post use their news sections to tell the same stories?

Right on time the Washington Post editors stepped into the fray arguing for “entitlement reform” with the frequently asserted but absurd argument that “It is not equitable to continue transferring net resources from young to old, especially when so many of the latter are well-off compared with many of the former.” Casting the problem as a generational dispute has become standard part of the grand bargainers’ propaganda.

“It’s autumn, when a politician’s fancy turns to thoughts of a Grand Bargain,” wrote Richard Eskow of the Campaign for America’s Future September 22.

“Right now it looks as if the two sides are at an impasse. But President Obama’s “no negotiations” posture only applies to the debt ceiling, and his budget still includes the ‘chained CPI’ cut to Social Security,” observed Eskow. “The Republicans who are attempting to force a showdown over Obamacare are still railing against the programs they call ‘entitlements.’

“They’re all looking for a face-saving deal, and Social Security and Medicare could very well become that deal’s Ground Zero.”

“Like harbingers of a hard winter, anti-entitlement spokesmen Alan Simpson and Erskine Bowles have returned to the nation’s capital,” continued Eskow. “These constituentless advocates for a widely disliked set of policies were given their usual unwarranted level of press coverage. Somewhat messianically, Simpson told Politico that “we have to be in reserve” in case politicians “put their country at risk” – by failing to impose the destructive austerity policies favored by Bowles and Simpson’s backers.”

Eskow went on to suggest an alarming but quite possible scenario unfolding over the next few days and weeks. “Tea Party Republicans are demanding Obamacare’s repeal in return for a budget deal. The President says he’ll refuse to negotiate. Things look hopelessly gridlocked. Look again. Boehner will want to give his party’s Tea Party wing something in return for dropping their futile Obamacare attacks, and entitlements would be the perfect prize.

“Both sides presumably wants a face-saving deal that each finds palatable. They’re most closely aligned on ‘entitlement cuts,’ so an agreement to cut them is a very real possibility. It’s one we should fear – and resist.”
___________________

BlackCommentator.com Editorial Board member and Columnist Carl Bloice is a writer in San Francisco, a member of the National Coordinating Committee of the Committees of Correspondence for Democracy and Socialism and formerly worked for a healthcare union. Bloice is one of the moderators of Portside. Other Carl Bloice writing can be found at leftmargin.wordpress.com.