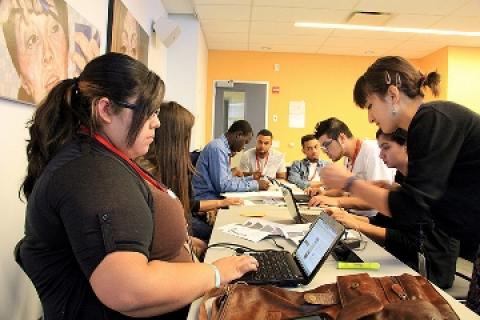 The Shutdown is Now Clogging Up the Data Economy. Thanks, Congress!

Thanks to the government shutdown, nearly a dozen federal Web sites are offline and 19 of them are no longer being updated. But a less obvious casualty of the widespread furloughs are the online tools that automatically relay government data to the public.

Federal agencies maintain hundreds of application programming interfaces, or APIs. Whenever you see an interactive map that's based on Census statistics or pollution data or other official information, that's often the result of a government data feed. These days, however, when a map or a program phones in to the feed for updates, it's often met with a "sorry, we're closed" message - just like the kind human visitors see when they visit Data.gov.

The good news is that the historical data companies have already downloaded from government servers won't be affected by the shutdown. So for people who are interested in using past data for research will still be able to do their work. But for the businesses and individuals who rely on timely federal data for their livelihoods, having the tap turned off is far worse than encountering a dead Web site.

NSA Stores Metadata of Millions of Web Users for Up to a Year, Secret Files Show

The National Security Agency is storing the online metadata of millions of internet users for up to a year, regardless of whether or not they are persons of interest to the agency, top secret documents reveal.

Metadata provides a record of almost anything a user does online, from browsing history - such as map searches and websites visited - to account details, email activity, and even some account passwords. This can be used to build a detailed picture of an individual's life.

The agency retains vast amounts of metadata in a repository, codenamed Marina.  Marina's unique capability is that it has the ability to look back on the last 365 days' worth of DNI metadata, regardless whether or not it was tasked for collection.  The ability to look back on a full year's history for any individual whose data was collected - either deliberately or incidentally -relies on storing the personal data of large numbers of internet users who are not, and never will be, of interest to the US intelligence community. The New York Times reported that the NSA was using its metadata troves to build profiles of US citizens' social connections, associations and in some cases location, augmenting the material the agency collects with additional information bought in from the commercial sector, which is not subject to the same legal restrictions as other data.

Countries all over the world, dictatorships and democracies alike, have in the last few years sought to tame - or plug entirely - that real-time fire hose of public opinion known as Twitter. But on the sidelines of the General Assembly meeting over the last couple of weeks, ministers, ambassadors and heads of state of all sorts , seized on Twitter to spin and spread their message.

At the height of the diplomatic negotiations last week over a United Nations Security Council resolution that would require Syria to turn over its stockpile of chemical weapons, the American ambassador to the United Nations, Samantha Power, used Twitter to pre-empt criticism of the measure as lacking teeth because it had no automatic enforcement provision.  The British ambassador, Mark Lyall Grant, took to Twitter to break news about when the Security Council would vote on it. Most improbable, the new president of Iran, where Twitter is banned, has used Twitter prolifically to convey that he was ready to make a nuclear deal with the West and even, briefly, to break the news that he had spoken to President Obama on the phone, the first such exchange between Iran and the United States in 34 years.

As nations jockeyed for influence and standing here in recent days, several diplomats pointed out Twitter's advantage. One government aide, who would not speak for attribution, said that it could be used to pre-empt journalists from being the first to get their interpretation of events before a wider audience.

What Inner City Kids Know About Social Media, And Why We Should Listen

I know all these things because I follow them all on various social media services. And they know I know; this isn't some kind of stolen glance into the online life of teenagers that no one is supposed to see. Contrary to popular belief among adults, these teenagers are not oblivious to privacy settings and do care a good amount about who can see what online. If anything, most of them have consciously chosen what they want to show to me and the rest of the world through social media. And what they're telling us is who they are and what they need from us as mentors.

Are actual teachers - that is, those employed by the school system - tapped into this wealth of information from their students? Likely not. The teachers I know are often discouraged, and sometimes downright forbidden from, interacting with their students on social media. While these policies are in place to help protect both teachers and students from all manner of things, this wall of separation may be keeping teachers from truly knowing their students in a time when teens need a mentor more than ever.

The story of Salvador Allende, president of the first ever democratically elected Marxist administration, who died when General Augusto Pinochet overthrew the young administration in a US-backed coup on 11 September, 1973, is well known amongst progressives. But the human rights horrors and tales of desaparecidos have eclipsed - quite understandably - the pioneering cybernetic planning work of the Chilean leader, his ministers and a British left-wing operations research scientist and management consultant named Stafford Beer. It was an ambitious, economy-wide experiment that has since been described as the `socialist internet', an effort  decades ahead of its time.

In 1970, the Allende government found itself the coordinator of a messy jumble of factories, mines and other workplaces that had long been state-run, others that were freshly nationalised, some under worker occupation and others still under the control of their managers or owners. An efficient strategy of coordination was required. The 29-year-old head of the Chilean Production Development Corporation and later finance minister Fernando Flores - responsible for the management and coordination between nationalised companies and the state, and his advisor, Raul Espejo, had been impressed with Beer's prolific writings on management cybernetics, and, like Allende, wanted to construct a socialist economy that was not centralised as the variations on the Soviet theme had been.

Beer was hired to advise the government, and the scheme he plunged himself into was called Project Cybersyn, a `nervous system' for the economy in which workers, community members and the government were to be connected together transmitting the resources they had on offer, their desires and needs via an interactive national communications network. The whole idea would seem, frankly, eccentrically ambitious, even potty, if today the internet were not such a quotidian experience.

Although never completed, by the time of the coup, the advanced prototype of the system, which had been built in four months, involved a series of 500 telex machines distributed to firms connected to two government-operated mainframe computers and stretched the length of the narrow country and covered roughly between a quarter and half of the nationalised economy. Factory output, raw material shipments and transport, high levels of absenteeism and other core economic data pinged about the country and to the capital, Santiago - a daily exchange of information between workers and their government, easily beating the six months on average for economic data to be processed in this way in most advanced countries.