"It's really hard for me to feed my two kids and struggle day to day,Do you think this is fair, that I have to be making $8.25 when I've worked for McDonald's for ten years?" (Nancy Salgado addressing McDonald's USA President Jeff Stratton's speech at the Union League Club of Chicago.) 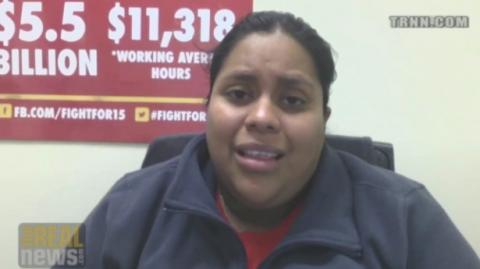 Nancy Salgado, McDonald's worker, tells McDonald's president she is unable to buy shoes or food for her children, The Real News / The Raw Story

A woman who has been employed by the McDonald's Corporation for over 10 years says she was arrested last week after she confronted the company president at a meeting and told him she couldn't afford to buy shoes or food for her children.

Nancy Salgado, 26, told The Real News that she felt like she had to speak out during McDonald's USA President Jeff Stratton's speech at the Union League Club of Chicago on Friday for the sake of her children.

"It's really hard for me to feed my two kids and struggle day to day," she shouted as Stratton was speaking. "Do you think this is fair, that I have to be making $8.25 when I've worked for McDonald's for ten years?"

"I've been there for forty years," Stratton replied from the podium.

"The thing is that I need a raise. But you're not helping your employees. How is this possible?" Salgado asked.

At that point, someone approached Salgado and informed her that she was going to be arrested.

She later recalled the encounter to The Real News' Jessica Desvarieux.

"The strength was very powerful, like, just remembering the face of my kids, like I say, you know, just simple things like I can't provide a pair of shoes like everybody else does, sometimes every month, or anything like that," she said. "And he needs to know we are what all the employees at McDonald's are going through. We're struggling day to day to provide our needs in our houses, things for our kids. And it's just - it gets harder and harder with just the poverty wage they have us living in."

"They just told me, you know, well, you're being under arrest because you just interrupted, you trespassed the property. You're just going to go to jail," Salgado added. "And what I remember just telling them, `well, like, so, because I have to speak out my mind and I had to tell the president the poverty wage I'm living in, that's just against the law?' You know, just be able to speak up your mind and say, you know what, I can't survive with $8.25? It's just - it's ridiculous that I'm going to get arrested. You know."

Salgado, who is still working at McDonald's, said she had her hours cut following the arrest and feared further retaliation.

"The CEOs make millions and billions a year and why can't they provide enough for their employees?" she wondered.