A new report says that early in-person voting reduces stress on the election system and provides greater access to voting. Based on extensive research, the report recommends that all states and local jurisdictions implement these seven early voting policies to expand the benefits of early voting nationwide. 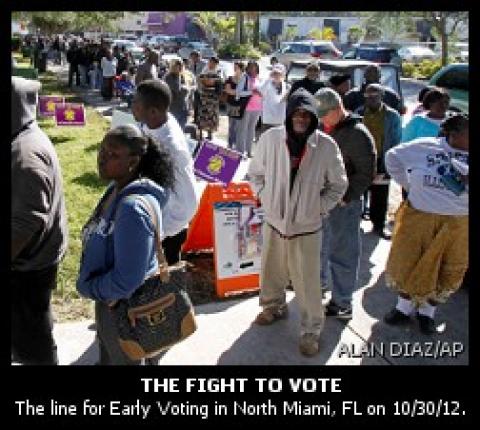 New York, NY – As voters across the country head to the polls next week and election officials review their voting protocols, the Brennan Center for Justice at NYU School of Law today released a new report detailing the benefits of early voting programs and offering recommendations to substantially improve our outdated election process.

“Given the increasing demands on many Americans’ schedules, early in person voting adds important flexibility and convenience to modernize the voting process, while keeping elections safe and secure,” said the Brennan Center’s Diana Kasdan, author of the report. “It reduces the administrative burdens of the Election Day rush and helps bring our antiquated voting system into the 21st century.”

Election officials also strongly support early voting. “Early voters are happy voters, and Election Day voters are grumpy voters,” said Larry Lomax, who served as the registrar of voters in Clark County, Nevada, for more than 15 years and is now a member of the Presidential Commission on Election Administration.

In contrast to a string of new state laws designed to restrict voting, at least 20 states considered proposals to start or expand early voting this year. These efforts are expected to continue in the next legislative session, with opportunities anticipated in Massachusetts, New Jersey, and New York, among other states.

The five primary benefits from effective early voting programs identified in the report include:

Today, early voting laws vary substantially state-to-state and even across local jurisdictions within states. Although a number of states have already recognized these benefits and are adopting or expanding their early voting programs, voters in many states are still required to rearrange their schedules and wait in line on Election Day to participate in the political process.

Based on extensive research, the report recommends that all states and local jurisdictions implement the following early voting policies to expand the benefits of early voting nationwide: