"All popular music stems from black music, be it jazz or rock and roll." . . . "I'd be happy if people said that I did a little bit to raise the dignity and recognition of the greatness of African-American music." 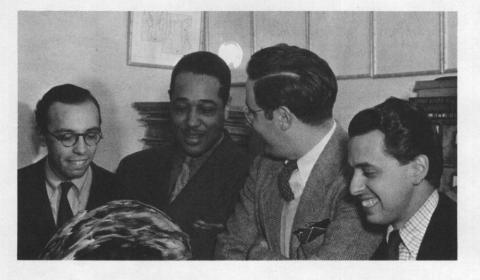 Nearly 80 years ago, two young Turkish brothers arrived in a deeply segregated Washington, D.C., and set on a course to help change race relations in America. Their path was not politics, but rock and roll and jazz. The lesson of Ahmet and Nesuhi Ertegun says as much about America as it does about those two remarkable men and their origins. This week, on the 90th anniversary of the founding of the modern Turkish state and through the prism of a "post-racial" America, it is worth recalling this remarkable journey.

Sons of Turkey's first ambassador to the United States, Ahmet and Nesuhi believed in the power of music to bring people together, which they did time and time again. Their love of music repeatedly led them to the city's black neighborhoods, where they took in the sounds of the country's greatest African-American musicians at the Howard Theatre and along "Black Broadway," which ran up and down 7th Street and U Street NW. Despite having attended private schools his entire life, Ahmet often joked that he got his real education at the Howard.

Ahmet in particular spent his youth bridging two very different worlds. At 16, Ahmet and his sister listened to the radio broadcast of Marian Anderson's performance at the Lincoln Memorial, which took place after the Daughters of the American Revolution refused to rent Constitution Hall to a black artist. After attending shows at the Howard, he and his brother would often invite artists back to the ambassador's residence, where a racially and culturally mixed group of musicians and music lovers gathered for jam sessions and meals.

Beginning in 1940, musicians such as Duke Ellington, Johnny Hodges, "Lead Belly," Teddy Wilson, Lester Young and members of the Benny Goodman, Ellington and Count Basie orchestras performed at the Turkish Embassy. Much to the ire of some Southern politicians at the time, the ambassador's residence became one of the few places that blacks and whites could gather freely and celebrate their shared love of music. Their father insisted that in the embassy, "his nation's house," all, regardless of color, would enter through the front door and be treated with dignity and respect.

Recalling Washington in the 1940s, Ahmet once said, "We had a lot of friends in Washington, and we could never go to a restaurant together, never go to a movie, or to the theater with them. It was impossible to go out. I couldn't even take Duke Ellington, who is one of the geniuses of our country, to a restaurant. Or Count Basie. That's how it was and we could not accept it." In early 1942 Ahmet and Nesuhi organized the first integrated concert at the only venue that would host it: the Jewish Community Center. In a deeply divided Washington, these two young Muslim Turks brought together black and white Christians at a Jewish venue for an unprecedented concert.

Then, after "threatening to make a big scene" unless the National Press Club rented its space at 14th and F STs. NW, they held a second integrated concert after the National Press Club relented. In a Washington Post article published on May 16, 1943, titled "Two Turks, Hot for U.S. Swing," Bill Gottlieb wrote that "from the beginning, the young Erteguns treated the music of Morton, Armstrong, Oliver, Ellington and the rest with sincere enthusiasm and scholarly discrimination, an attitude that, strangely enough is more typical of Europeans than of Americans."

Ahmet went on to help form Atlantic Records. He traveled to New Orleans and Harlem to sign the greatest black musicians of the time, including Stick McGhee, The Harlemaires and The Drifters. At the time, black artists were significantly underpaid and exploited for their talents. Most never achieved mainstream success and instead watched as white artists topped the charts with covers of their music.

Today, as Turks and Turkish Americans celebrate the extraordinary rise of their nation over the 90 years since the founding of the modern Turkish state, Americans unknowingly celebrate two Turks who helmed the extraordinary rise of black music. We should take a moment to remember the legacy of Ahmet and Nesuhi Ertegun, two Turkish Americans who worked with blacks, whites, Muslims and Jews to break down racial, cultural and religious barriers and revolutionized the recording industry.

A short time before he died, Ahmet Ertegun said, "All popular music stems from black music, be it jazz or rock and roll." He added, "I'd be happy if people said that I did a little bit to raise the dignity and recognition of the greatness of African-American music." He understood the extraordinary beauty and dignity of African-American music and its contributions to the world.