A Supreme Court case being argued could take away a tactic that's kept unions alive. The case, Unite Here Local 355 v. Mulhall, involves the constitutionality of "card check neutrality agreements" between unions and companies they're trying to organize. The case now facing Antonin Scalia and company could be "the most significant labor case in a generation." 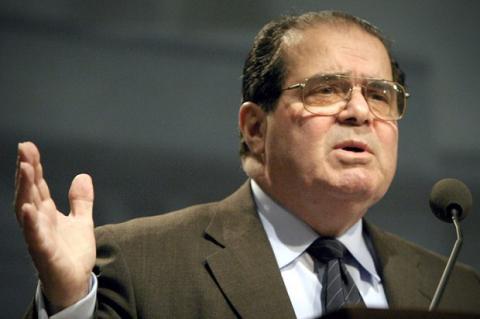 On Wednesday, the Supreme Court will hear arguments on an under-the-radar case that could deal a major blow to already embattled U.S. unions. As Harvard labor law professor Benjamin Sachs told the New York Times, the case now facing Antonin Scalia and company could be "the most significant labor case in a generation."

The case, Unite Here Local 355 v. Mulhall, involves the constitutionality of "card check neutrality agreements" between unions and companies they're trying to organize. That's the technical-sounding term for agreements that pave the way for unionization by restricting companies from running union-busting campaigns, and by committing companies to recognize a union and start negotiating if a majority of workers sign union cards, rather than holding out for a government-supervised election. In exchange, unions can agree not to publicly shame and slam the company - which means calling off the kind of public pressure campaign often necessary to compel companies to sign away their union-busting rights.

None of this would matter as much if the New Deal National Labor Relations Act, which commits the federal government to encourage collective bargaining (seriously, that's what it says), actually ensured that it was up to a company's workers, not its management, whether to have a union contract. But the government-supervised National Labor Relations Board unionization process is, depending on your level of cynicism, either "broken" or "fixed" against workers. It's rife with opportunities for bosses to delay, gerrymander and intimidate workers - including holding mandatory on-the-clock anti-union lectures full of ominous "predictions" - without breaking the law. And research suggests it's also marked by rampant illegality - including alleged illegal firings in a third of election campaigns - that's perhaps predictable given that the worst-case scenario for scofflaw CEOs is usually reinstating an employee months later with back pay. Even if pro-union workers win an election, the law alone doesn't make corporations offer real contract concessions, and a year after the vote workers are about as likely as not to still be without a union contract.

In other words, just having passively pro-union workers and a putatively pro-union law isn't enough to force a transfer of wealth and power to workers. Confronted with this reality, some unions have taken up a range of tactics that aim to compel concessions from corporations. The best of these are truly "comprehensive campaigns" - combining aggressive workplace activism like strikes, non-astroturf community and consumer pressure, and sophisticated attacks on a company's legal, political and media vulnerabilities. Other efforts are more anemic - a website and a "usual suspects" press release. Most companies can tell the difference.

And, more controversially, some campaigns are about enticing companies as much as intimidating them - by offering companies lobbying assistance, or pre-agreeing on how much a contract could cost, or excluding other groups of non-union workers within a company's ranks. An activist identified as a Chicago health food store cashier predicted to In These Times' Arun Gupta that once the Service Employees International Union saw the opportunity for "a win" in the fast food campaign it's funded and fomented, the union would "focus on it narrowly," and "the concern becomes: What about all the other workers who are now mobilized, who have organized themselves, but don't necessarily fit into SEIU's focus for a win?" An SEIU spokesperson told Gupta that "community organizations that are part of the coalition and workers continue to brainstorm and expect to experiment with a variety of actions and strategies."

However they end, those fast food strikes exemplify a larger trend: Through a range of tactics, unions try to secure recognition and contracts without retaliation or deadlock - whether with an NLRB election in which union-busters' hands are tied by a side agreement, or through a promise to recognize a union once a majority show support ("card check" or "majority sign-up"). But John Roberts' Supreme Court may make that harder to do, by restricting unions' ability to make such deals - good deals, bad deals, or otherwise.

As the Times' Steven Greenhouse reported, at issue in the Mulhall case is a neutrality agreement between a Florida local of the hospitality workers union Unite Here and the company Mardi Gras Gaming, in which the company agreed to card check and the union agreed to eschew strikes and pickets, and to support a ballot initiative on gambling. (I worked for Unite Here from 2006 to 2011 - not in Florida - but have no inside knowledge of the case.) With help from an anti-union foundation, a casino employee brought a lawsuit arguing that the deal was an illegal "thing of value" that a company was prevented under federal law from giving to union officials. An appeals court sided against the union, clashing with two other circuits' takes on the issue and setting the stage for a SCOTUS decision.

If the Court sides against the union, and further circumscribes a relatively effective union tactic, it wouldn't be the first time. In fact, U.S. workers have repeatedly seen their best tactics hindered or hamstrung by politicians and courts. The Taft-Hartley Act restricted strikes, and workers' freedom to spread their struggle through a supply chain - the kind of pressure whose potency antiabortion activists demonstrated by going after the Komen Foundation in order to hurt Planned Parenthood. Companies have seized RICO in an effort to get peaceful pressure tactics - like discouraging Oprah from promoting a pork company - treated as evidence of illicit racketeering. Now congressional Republicans are going after what I've called "Alt-labor" groups - non-union labor groups using comprehensive campaign tactics to organize workers who legally can't unionize or so far haven't - and seeking to subject them to some of the same legal restrictions that hem in unions. Others have sought to ban companies from recognizing unions without a government-supervised election. And, as Greenhouse notes, the Court will also consider cracking down on unionization of Medicaid-funded home-care workers. This is the pattern that led then-AFL-CIO president Lane Kirkland to pronounce in the `80s and `90s that unions would be better off under "the law of the jungle" than the status quo.

If the right-wing lobby's Mulhall legal theory were taken to its logical conclusion, AFL-CIO general counsel Craig Becker told the Times, it "would criminalize a large swath of ordinary, voluntary labor-management relations." Added Becker, a former member of the National Labor Relations Board, "The implications are really sweeping."

[Josh Eidelson covers politics, labor, and inequality as a reporter for Salon. His work has appeared at outlets including The Washington Post, Reuters, Slate, Dissent, and The American Prospect. His reporting on the Walmart strike wave for The Nation received a Sidney award from the Sidney Hillman Foundation.
After receiving his MA in Political Science from Yale, Eidelson spent five years as a union organizer for UNITE HERE in Sacramento, Pittsburgh, and Philadelphia. He appears frequently as a commentator on labor and politics on radio and TV. He is based in New York.]