The Backroom Deal That Could’ve Given Us Single-Payer 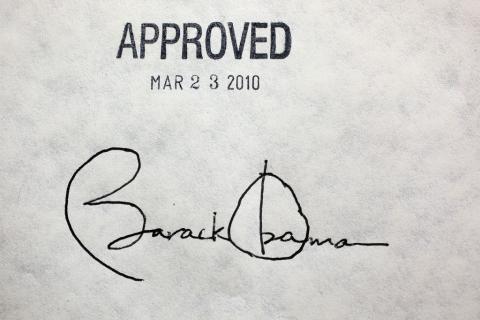 Back in March 2009, leaks from the White House made it clear that a single-payer health insurance system was “off the table” as an option for health care reform. By doing so, the President had ruled out the simplest and most obvious reform of the disaster that is US healthcare. Instituting single-payer would have meant putting US health insurance companies out of business and extending the existing Medicare or Medicaid to the entire population. Instead, over the following weeks the outlines of the bloated monstrosity known as Obamacare emerged; an impossibly complicated Rube Goldberg contraption, badly designed, incompetently executed, and whose intended beneficiaries increasingly seem to hate.

The decision to abandon the nationalization of perhaps the most unpopular companies in the US is correctly attributed to the fundamental conservatism of the Obama White House, and its unwillingness to take on the health insurers, pharmaceutical companies, or any interest group willing and able to spend millions lobbying, hiring former politicians, and donating to campaigns. Obama’s “wimpiness,” his need to always take the path of least resistance, became common tropes among the American left. Obamacare, liberals claim, is the best possible reform that could’ve been wrangled out of the health insurance industry.

But were the many backroom deals that make up Obamacare really an easier alternative to nationalization? A look at the financial details reveals the opposite conclusion. In strictly financial terms, nationalization would have been the easiest way forward, costing relatively little and delivering immediate savings while making access to health care truly universal. Politically, Obama could have counted on the support of a unlikely ally of progressive causes: health insurance shareholders, the theoretical owners of those very companies who would have been relieved of their then-dubious investments with a huge payout.

As of the end of 2008, the private insurance market covered 60 percent of the US population. For-profit insurers accounted for a large and growing share. The top five insurers accounted for 60 percent of the market — all but one of them for-profit companies. Absent a Bolshevik revolution, implementing a single-payer system would have required proper compensation for the owners of these institutions for their loss of future income — shareholders in the case of the for-profit insurers and, allegedly, the supposed policyholders in the case of most non-profits.

How much compensation? Well, in mid-2009, the total market capitalization of four out of the five top health insurers (the fifth is a nonprofit) amounted to about $60 billion. By then, the stock market had already rebounded nicely from the lows of the crisis, and the uncertainty over Obamacare had largely dissipated, so these were not particularly depressed valuations. Extrapolating this valuation to the rest of the health insurers would have a put a price tag of about $120 billion on the whole racket.

This means that buying out the entire health insurance industry at an enormously generous premium of, say, 100 percent, would have cost the Treasury $240 billion – about 2 percent of 2009 gross domestic product. And this figure is highly inflated —premiums for buying out well-established companies rarely exceed 50 percent and are usually closer to 20 percent. Also, I am valuing the dubious claims of non-profit policyholders on par with the more vigorously-enforced property rights of for-profit shareholders.

Other than the big smiles on the faces of health insurer shareholders across the country, what would have been the US Treasury’s payoff for writing a $240 billion check? Once again, the numbers are simple, and startling. US private insurance, whether for-profit or otherwise, may well be the most wasteful bureaucracy in human history, making the old Gosplan office look like a scrappy startup by comparison. Estimates of pure administrative waste range anywhere from 0.75 percent to 2.6 percent of total US economic output.

Extrapolating again from the biggest four for-profit insurers, in 2008, the industry as a whole claimed to spend 18.5 percent of the premiums it collected on things other than payments to providers. (The other 81.5% that is spent paying for actual care is known as medical loss ratio. Keeping this ratio down is a health insurer CEO’s top priority.) Medicare, by contrast, spends just 2 percent. The difference amounts to $130 billion, to which we must add the compliance costs the private insurers impose on health care providers — $28 billion, according to Health Affairs. The costs incurred by consumers are difficult to measure, although very real to anyone who’s spent an afternoon on the phone with a health insurance rep.

So, to recap, nationalization of the health insurance industry in 2009 would have cost no more (and almost certainly a lot less) than $240 billion. The savings in waste resulting from replacing the health insurance racket with an extension of Medicare would have resulted in no less than $158 billion a year. That’s an annualized return on investment of 66 percent. The entire operation would have paid for itself in less than 18 months, and after that, an eternity of administrative efficiency for free. And, of course, happy shareholders.

There would have been nothing exceptional about the arrangement, either. Examples abound of states buying out private shareholders on mutually agreeable terms. The British takeover of the “commanding heights” of the economy after World War II is perhaps the best known, but there have also been potash miners in Canada, New Zealand’s railroads, and Swedish ore producers among others. None of these cases were precursors to the Gulag.

In fact, in most of those cases it was the taxpayer who ended up getting fleeced, buying lemons at inflated prices. That would not have been an issue in this case – we’d have been going in knowing that we’re buying lemons.[MU2]  After the deal closed, there would have been very little to do beyond shutting down operations, selling the buildings, and auctioning off the furniture. Everybody wins.

So what would make a self-described market-lover like Obama take such an obvious solution off the table before the discussions even began? As it turns out, Obama is a fan of a very specific kind of market – the kind of complicated, opaque market full of rules, moving parts, variables, exceptions, and complexities that generate lots of opportunities for rent extraction.

Since one person’s waste is another’s income, it is useful to look at the $130 billion (closer to $150 billion today) not so much as waste but as rent extraction. Rent extraction by whom? A look at private insurers’ financial statements sheds some light.

In 2007, the adjusted net profit margin of the average health policy amounted to just 0.6 percent (adjusted to account for the fact that many large employers self-insure, and simply pay an insurer to handle the administration of the plan; the insurer then reports only the fee paid by the employer as revenue, which skews their published profit margins upwards). Out of every $100 paid in premiums to a private insurer, the net profit extracted by its putative owner was just sixty cents. This may not be the appropriate venue to shed a tear for the poor anonymous shareholder, but it is clear that she did not exactly have a privileged place at the trough. Of all the loot extracted by the health insurance companies she invested in, just 4 percent ended up in her pocket.

Where does the rest go? Mostly, salaries for the industry’s nearly half a million employees, who get paid on average 46 percent more than the typical American worker. Health care CEO pay is the highest among all sectors of the economy, and insurance executives are the highest paid of all. United HealthCare’s CEO extracted for himself a very nice package of $42 million in 2011, and the average among the Big Four for-profit insurers was $14.1 million. By contrast, poor old Lloyd Blankfein of Goldman Sachs took home a mere $9 million.

The picture that emerges of health insurance rent extraction is that of college-educated managers in the middle; at the top, a miasma of the impeccably credentialed and connected executives, consultants, lobbyists and PR hacks that make up the backbone of post-industrial America’s upper echelon. Instead of an Andrew Carnegie, we get a hundred Tom Daschles. Except this time, no libraries, just ten thousand MBAs droning on in front of a Powerpoint slideshow – forever. Not exactly an improvement.

So what would be the costs if we had a president willing to nationalize health care now that Obamacare is the law of the land? Since 2009, when single-payer was taken off the table, the stock market has been lifted by the Federal Reserve’s desperate attempts to compensate for fiscal austerity and public and private disinvestment. The Treasury check would have to be bigger today, perhaps on the order of $500 billion – much less if the payoff to shareholders went from colossal to merely enormous, for instance. The public’s return on investment would still be over 30 percent.

The current system is mind-bogglingly wasteful. Its elimination would free up so many resources that a huge payoff for shareholders can be considered almost as an afterthought. However, the half-million people who currently work in the industry would have to seek gainful employment. That would include thousands of seven-figure executives, lobbyists, consultants and PR hacks. Such a tragedy will not unfold on Obama’s watch.

The US does not have a health insurance problem. It has a health care cost problem – the uninsured are a symptom, not the illness itself. The parasitism of the actual health insurance companies is just more obvious than others. But from overpaid doctors, to usurious hospitals that charge $500 for a stitch, to snake oil-peddling pharmaceutical companies charging thousands a year for dubious treatments, there are simply too many people collecting too much money just because they can.

Unfortunately for the rest of us, they all seem to have a very good friend in the White House.