Thailand Police Raptured Away in Solidarity; Big Food Portrays Itself As Anti-Big Food; A Plan to Save the Detroit Institute of Art Might Also Save Detroit's Pensions; JP Chase Morgan Reads Reverend Billy the Riot Act; The Phony Philanthropy of eBay's Billionaire Pierre Omidyar; Subtext of Super Heroes is Fascism. 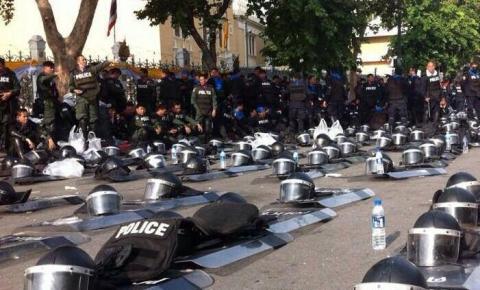 In Thailand, riot police yielded to the peaceful protesters they were ordered to harass and block - police removed barricades and their helmets as a sign of solidarity., PoliticalBlindSpot.com

In a stunning turn of events today in Thailand, riot police yielded to the peaceful protesters they were ordered to harass and blocked. They police removing barricades and their helmets as a sign of solidarity.

The protesters explain that their goal is to destroy the political machine of former Prime Minister Thaksin Shinawatra, who is accused of widespread corruption and abuse of power . Thaksin's sister, Prime Minister Yingluck Shinawatra, is currently in power, and is seen as a puppet of her brother.  [She has since dissolved the Parliament and called for new elections in February.]

If you're one of the more than 7 million people who have watched the global fast-food chain Chipotle's latest animated advertisement - accompanied by a smartphone game - which depicts a haunting parody of corporate agribusiness: cartoon chickens inflated by robotic antibiotic arms, scarecrow workers displaced by ruthless automata. Chipotle's logo appears only at the very end of the three-minute trailer; it is otherwise branding-free. The motivation for this big-budget exposé? `We're trying to educate people about where their food comes from,' Mark Crumpacker, chief marketing officer at Chipotle, told USA Today, but `millennials are skeptical of brands that perpetuate themselves'.

Never mind that Chipotle itself - with more than 1,500 outlets across the US, and an annual turnover of $278 million - is hardly treading lightly on the world's agricultural system. The real story is that the company is using a dose of anti-Big Food sentiment to inoculate the viewer against not buying any more of its burritos. Chipotle are very happy to sell the idea that they're on our side if it helps to keep the millennials happy.

DIA joins talks to protect its art in bankruptcy, free it from city ownership

The Detroit Institute of Arts has joined behind-the-scenes federally mediated talks to shield the museum from creditors in Detroit's bankruptcy and bolster at-risk municipal pensions.

The museum's direct involvement in the talks, which also include leaders from at least 10 national and local charitable foundations, signals that the parties are moving closer to a grand bargain brokered by U.S. Chief District Judge Gerald Rosen. The plan would funnel about $500 million into pensions, thereby buying the DIA its independence from city ownership and freeing up more money  for city services. Rosen's deal is an attempt to prevent the city-owned DIA from being forced to sell some of its irreplaceable masterpieces to appease creditors in bankruptcy court, simultaneously resolving two of the most contentious conflicts in the bankruptcy drama - the battle over the DIA, and the fight over potentially steep cuts to pensions for 23,000 retirees.

Is this America's own Pussy Riot trial?

On a Saturday afternoon in June, a group of activists walked into a bank in Manhattan, New York, and staged a peaceful protest performance. The Church of Stop Shopping, led by Reverend Billy, were protesting at JP Chase Morgan and other banks' investment in fossil fuel projects, which they say is unethical in the face of climate change.

Bill Talen, 63, the man behind Reverend Bill and the Church of Stop Shopping, has been staging this kind of action for a while. But now Bill and his colleague Nehemiah Luckett are facing charges of riot in the second degree and menacing in the third degree, for their JP Chase Morgan protest. The pair could end with one year in jail. For a peaceful protest. They are due to appear in court on 9 December.

It's hard not to think of the fate of Russia's Pussy Riot when writing about Reverend Billy. Both Pussy Riot and the Stop Shopping Choir have used similar tactics, staging peaceful performance protests right in what they would see as the belly of the beast. And both have been subjected to very harsh charges.  The difference is, of course, that we don't expect this kind of thing to happen in the US.

The world knows very little about the political motivations of Pierre Omidyar, the eBay billionaire who is founding (and funding) a quarter-billion-dollar journalism venture with Glenn Greenwald, Laura Poitras and Jeremy Scahill. What we do know is this: Pierre Omidyar is a very special kind of technology billionaire.

Ah yes, the fabled "civic-minded billionaire"-you'll find him two doors down from the tooth fairy.

Pierre Omidyar's massive nonprofit venture, Omidyar Network, has distributed hundreds of millions of dollars to causes all across the world.   Yet what no one seems able to specify is exactly what ideology Omidyar Network promotes.

Since its founding in 2004, Omidyar Network has committed nearly $300 million to a range of nonprofit and for-profit "charity" outfits. An examination of the ideas behind the Omidyar Network and of the investments it has made suggests that its founder is anything but a "different" sort of billionaire. Instead, what emerges is almost a caricature of neoliberal ideology, complete with the trail of destruction that ensues when that ideology is put into practice. The generous support of the Omidyar Network goes toward "fighting poverty" through micro-lending, reducing third-world illiteracy rates by privatizing education and protecting human rights by expanding property titles ("private property rights") into slums and villages across the developing world.

Superheroes Are a Bunch of Fascists

Everything has a political dimension, but this is all too often forgotten with superhero narratives. What has been overlooked is just what a lousy metaphor superheroes are for nations. The main problem is force: sheer physical force, which lies at the heart of the superhero myth.  After all, Superman triumphs by being able to move faster and hit harder than everyone else: essentially a fascist concept.  At this point it's interesting to reflect on the real-life leader who chose a name meaning "Man Of Steel": Stalin.

Fascism also reduces the role of anyone who isn't Superman to that of an adoring onlooker. The underlying idea is that people are sheep, who need Strong Shepherds.  Just as Superman's triumph is due not to heroism but to his physical strength, the successes of Iron Man and Batman are due to their equipment.