After a series of one-day strikes, marches and demonstrations, about 220 food- service workers at two Smithsonian museums will be represented by a union in contract negotiations for the first time. 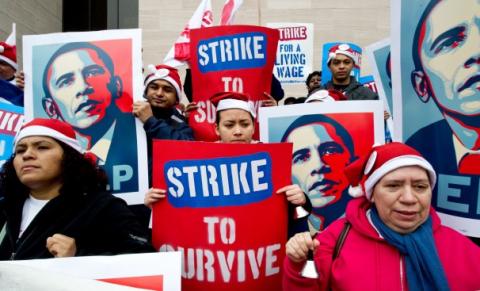 Demonstrators protest outside a McDonald's restaurant located inside of the Smithsonian Air and Space Museum as part of a nationwide protest of fast food workers in this Dec. 5 photo., Washington Post / Karen Bleier/AFP/Getty Images

After a series of one-day strikes, marches and demonstrations, about 220 food-service workers at two Smithsonian Institution museums will be represented by a union in contract negotiations for the first time, organizers said Monday.

The negotiations, set to start next month, mark a small victory in a growing movement for better pay for low-wage workers, an estimated 2 million of whom work for federal contractors.

"People have wondered whether this is just a media-driven phenomenon," said Paco Fabian, a spokesman for Good Jobs Nation, an advocacy group. "Here's an example of something that is tangible."

The coming negotiations are a small breakthrough for a movement that has attracted widespread media attention and support from some political leaders - but little in economic victories - over the past year.

A number of local and state governments have enacted or are pushing for minimum-wage increases. And President Obama, who in his State of the Union address this year called for raising the federal minimum wage from $7.25 to $9 a hour, has since supported a $10.10 minimum wage.

Obama also has denounced income inequality, saying that finding policies to counteract the growing divide is a top priority.

Still, the president's rhetoric has been far bolder than his actions to combat inequality, some advocates say. Labor leaders and progressives in Congress have been pushing the president to sign an executive order requiring employees of federal contractors to be paid a living wage. An estimated 2 million of them don't earn that much, worker advocates say, making the federal government the largest employer of low-wage workers in the nation.

But Obama has not signed the executive order, and the White House has been vague when questioned about it. "Broadly speaking, not addressing this, .?.?. the president is always looking for ways to move the ball forward where Congress won't work with him to do that," White House press secretary Jay Carney said when asked about the executive order this month.

Rep. Keith Ellison (D-Minn.), co-chairman of the Progressive Caucus, who recently hand delivered a letter to Obama urging him to enact the measure, said he is confident the president will sign it.

"I think the president's heart is certainly in the right place," Ellison said. "He set forth a tremendous vision, which I tremendously support. But aligning that vision with a policy platform is easier said than done."

Meanwhile, many employees working for federal contractors say they are struggling to survive. "It is hard to make ends meet," said Luis Chiliquinga, 64, who works at a McDonald's restaurant at the National Air and Space Museum. He earns $8.32 an hour and has been working as few as eight hours a week. "I am disappointed that the president has not signed the order."

John W. Anderson Jr., 38, a line cook at the American History Museum, called the impending contract negotiations progress. He makes $10.50 an hour and lives in a rented room in Northeast Washington with his son. He said he is hoping to get a raise that will allow him to rent his own apartment.

"Our company has already taken some strides to help us, now I am excited that is another step closer to having somebody speaking for us so we can have some livable wages," he said.