Western activists and diplomats are focusing on Israel's settlements in the Palestinian territories, and if peace talks fail, the rain of boycotts and sanctions could turn into a flood. This past week a second American academic organization overwhelmingly endorsed the economic and academic boycott of Israel. 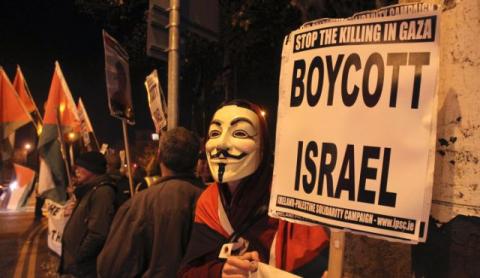 Protesters in Ireland call for a boycott of Israel following Israeli bombing of Gaza. (photo from November 2012)., Haaretz // Photo by AP

A senior European diplomat met with an Israeli counterpart a few weeks ago and one of the topics they discussed was the continued European Union sanctions against the settlements. They raised in their conversation the possible scenario that Israeli produce from the West Bank would be marked as such in European supermarkets. The conversation points to one of the gravest threats Israel will face in the coming year, namely its growing international isolation.

"The marking of produce from the [Palestinian] territories is on hold at this stage," the European diplomat said to his Israeli interlocutor. "However, should the negotiations with the Palestinians run aground you should expect a deluge of sanctions." The Israeli official was taken aback by the sharp words. "aren't the circumstances of a breakdown in negotiations relevant," he asked. The European replied laconically, "the way things look now, you will be the losers in the blame game."

There are five months left in the time frame set for negotiations between Israel and the Palestinians. Against a backdrop of limping talks, U.S. Secretary of State John Kerry is preparing to present the two sides with a "framework agreement" in an attempt to achieve a breakthrough in the impasse and to force leaders to reach decisions.

Kerry has warned Prime Minister Benjamin Netanyahu of a drive to delegitimize Israel and of a "boycott campaign on steroids" that will unfold if talks fail. These dire warnings by the Secretary of State and the European diplomat are already starting to play out. There is not yet a deluge of boycotts and sanctions by Western states, but flow is certainly increasing. The main target of this campaign are the settlements and any entity associated with them.

An increasing number of supermarket chains are not waiting for directives from above and are already labeling produce that originate in settlement farms. There is an increasing campaign to boycott any Israeli products from the West Bank, such as dates from the Jordan Valley, or equipment and bottles made by SodaStream, which has a factory in the settlement of Mishor Adumim. There is a concerted effort ahead of Christmas to bring about a consumer boycott of SodaStream in Britain, Italy, Canada, the United States and Australia. A few weeks ago, Ahava Dead Sea Laboratories, an Israeli cosmetics company, ceased operations in South Africa following a similar campaign.

It is not only Israeli companies that have been targeted. International firms that operate beyond the Green Line have also come under fire by boycott campaigns. The French giant Veolia Transport is facing heavy pressure due to its presence in East Jerusalem and other West Bank locations. Veolia's subsidiary in Israel just announced it would stop operating buses on Route 443, a highway that connects the West Bank to Jerusalem. Another example is the British security services company G4S, which has lost contracts in South Africa due to its contracts in West Bank settlements. There are also campaigns at Kings College and Sheffield University in Britain calling for withdrawal of investments in Israel.

Last week, there were more examples of such efforts. The British government published recommendations against investing in, transferring money to or purchasing real estate in the settlements. The report warned of "potential reputational implications" of such business dealings. The largest water company in the Netherlands announced that after "consultations" with the Hague's Foreign Ministry it was cutting ties with Israel's water supplier Mekorot, due utility's activities in the Palestinian territories. Even Romania, not known to be tough on Israel's occupation of the West Bank, demanded Romanian workers sent to Israel would not be employed in the settlements.

The Foreign Ministry is helpless in face of these developments. With Prime Minister Netanyahu announcing construction of 5,000 more units in the settlements and Housing Minister Uri Ariel launching a tsunami with new tenders for 24,000 units in the Palestinian territories, it is hard to convince anyone that Israel is invested to reaching a two-state solution to the conflict with the Palestinians.

All that Israeli diplomats can do is lodge objections with foreign governments. They have told the Foreign Office in London that warnings to businessmen hurt the peace process. They protested to the Dutch ambassador in Tel Aviv about "the atmosphere created by the Dutch Foreign Ministry, which only encourages a boycott of Israel." They delivered an ultimatum to the Romanian government over its demand about workers coming to Israel - and Romania seems for now to have reconsidered its position.

Senior Foreign Ministry officials admit that these are band-aid measures at best, or at worst, attempts to revive the dead. The waves of construction that follow each phase of Palestinian prisoner release may placate the Judea and Samaria Council and the Habayit Hayehudi party, but they infuriate the international community and drive it to consider further sanctions against the settlements. The Foreign Ministry says the new guidelines of the European Union prohibiting the funding of activities or organizations in settlements are a new strategic landmark in the European Union's attitude toward the Israeli occupation of the West Bank. The guidelines prohibit the granting of any funds, scholarships or prizes to any agencies in these settlements, as well as prohibiting loaning money to any Israeli agency which has any ties to the settlements.

While these EU sanctions garnered widespread media coverage, other sanctions went almost unnoticed. It did not escape the attention of the Foreign Ministry, however, when in June, the European Union issued new directives on quality control certification for agricultural produce. A senior Foreign Ministry official said the European Union would no longer accept a stamp of approval by Israel's Plant Inspection and Protection Services for produce from the West Bank. The policy began applying to any organic produce since July. Not an outright a prohibition on importing produce from the settlements, these moves will nevertheless make it very difficult for Israeli farmers in the West Bank to market their produce in Europe, causing growers financial trouble.

Relations between the Foreign Ministry and the European Union's foreign affairs council are faring very poorly. Suspicion and animosity mar contacts between Israeli official and Brussels. The feeling in Jerusalem is that EU foreign policy chief Catherine Ashton's staff in Brussels, East Jerusalem and even Tel Aviv are constantly pushing for more pressure and sanctions on Israel over the settlement issue, infecting many individual European diplomats with their enthusiasm. A senior Foreign Ministry official in Jerusalem says there is a "Brusselization" process which is taking over foreign ministries in European capitals.

The wave of boycotts is spilling over from Europe to North America. Last week, the American Studies Association passed an unprecedented resolution calling to boycott Israeli universities. Later this month, lecturers in the association will vote on whether to ratify the resolution.

A few weeks earlier, the annual convention of the American Public Health Association was held. This association represents thirty thousand doctors, nurses and nursing aides. A resolution declaring that Israel is harming the health of Palestinians failed to pass only due to months of lobbying efforts by Jewish organizations. Boycott initiatives are also popping up in liberal churches in North America. The United Church of Canada, the largest Christian denomination in the country, has started a campaign to boycott products made in the settlements and by companies that operate beyond the Green Line.

New research published by the Molad Center for Renewal of Democracy addresses Israel's standing in the world. It determined that Israel is particularly vulnerable to sanctions and boycotts by Western countries due to the animosity of neighboring countries, and because 40% of Israel's Gross National Product is based on exports, primarily to Europe. The research also pointed to a less known phenomenon of concealed boycotts. The findings show that Israeli businessmen, artists and academics are confronting increasing refusal of international agencies and potential partners to collaborate with them, due to the political baggage that the Israeli-Palestinian conflict brings with it. It's hard to assess how much damage this does to the Israel's economy.

The study says that despite the difficulties facing Israel since its founding, it succeeded in forging alliances with the United States and Europe. These relationships have deteriorated in recent years and are in now jeopardy. The researchers examined cultural and scientific ties as well as economic and political relations, and found that most of the tension with Western countries stems from the occupation. The study determined that this trend would only get worse with time unless there was a change to Israeli policy. "The continued occupation and the insistence of the government to continue with the settlement enterprise are directly responsible for the erosion of Israel's international standing. As long as the settlements continue, the risk of Israel becoming more isolated will grow." The researchers don't believe that Western governments and publics wish to boycott Israel or to put its right to exist in doubt. As evidence, they point out that the boycotts have only targetted the occupied territories and settlements.

"The international consensus clearly differentiates between the legitimacy of Israel and that of the settlements. Just as the commonality in values and strategy strengthens Israel's ties with the West, the divide over the occupation weakens them." The researchers claim that it's not too late to reverse this trend and to block the threat of isolation facing Israel, but that the window of opportunity is not without limits. "Israel is enjoying a period of grace in which its traditional allies support it and the countries around it are locked in internal struggles. Nearly any plan that goes beyond futile negotiations and that calls for an end to the occupation will help Israel. Such a step will draw a clear line between opposition to the existence of Israel and to its occupation of the West Bank."

[Barak Ravid is the diplomatic correspondent for Haaretz newspaper. He joined Haaretz in April 2007, covering the Prime Minister's Office, the Foreign Ministry and the Ministry of Defense, dealing with issues such as U.S.-Israeli relations, EU-Israeli relations and the peace process. Before joining Haaretz, Barak Ravid worked for two years for Maariv daily newspaper, spending a year covering the Palestinian Authority and a year as a diplomatic correspondent. Ravid has a BA in the history of the Middle East from the University of Tel Aviv. He served for six years as an officer in the Israel Defense Forces, and concluded his service with the rank of captain.]