King of the Outcast Teens: Kurt Cobain and the Politics of Nirvana

In recognition of the anniversary of the death of Nirvana leader Kurt Cobain, a host of retrospectives will recognize both the raw potency of Cobain's songwriting and the tragedy of his heroin use and suicide. They will hide that Nirvana was a band of rebels. 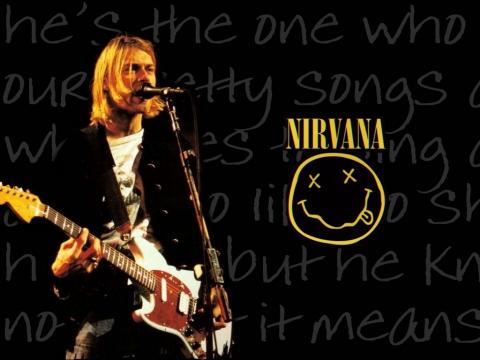 This April marks twenty years since the death of Nirvana leader Kurt Cobain, one of the most iconic cultural figures of the late 20th century.  In recognition of that anniversary, a host of retrospectives will recognize both the raw potency of Cobain's songwriting and the tragedy of his heroin use and suicide.  Echoing the tired, sexist tropes of "John and Yoko" and "Sid and Nancy," many will also associate Cobain's downfall with his wife, Courtney Love.  These tabloid narratives will overshadow Nirvana's political and cultural significance.  They will hide that Nirvana was a band of rebels.

A year before his death in 1994, Kurt Cobain expressed hope that his generation could reject the "Reaganite bullshit" that was forced upon them during their childhoods.  Indeed, from the growing popularity of countercultural music (both "alternative" rock and hip-hop) to the rise of the global justice movement, the 1990s seemed to offer a youth-led counterbalance to the racism, sexism, and homophobia that swept Ronald Reagan and George H.W. Bush into office a decade earlier.  Twenty years later, however, America's culture wars remain very much alive, and boastful opposition to so-called "political correctness" is used to justify intolerance and oppression in many forms.

In 2012, just a year after the CDC's findings that 1 in 5 American women had been raped, several Republican candidates used their campaigns to share their views on the subject  -ranging from Richard Mourdock's claim that rape reflected the will of God to attempts by Congressmen Todd Akin and Ron Paul to clarify which instances of sexual violence they believed constituted "legitimate" and "honest" rape.  The same year, high school football players in Steubenville, Ohio raped an unconscious 16-year old girl at a party and used social media to share images of the assault.  One of the perpetrators' friends commented online that "the song of the night" was Nirvana's "Rape Me."

Just as popular anti-feminists like Phyllis Schalfly and Jerry Falwell gave legitimacy to sexist and homophobic political positions in the 1970s and `80s, conservative American voices today provide a wide cover for bullying, hate crimes, and other oppressive behaviors.  This bigotry and its apologists were precisely what Kurt Cobain stood against.

As a band, Nirvana was less openly political than punk predecessors like the Dead Kennedys or the Clash, and they were decidedly less focused on activism than their friends in Bikini Kill.  Even so, in August 1992, Nirvana performed at a benefit concert to fight against Oregon's anti-gay ballot initiative Measure 9.  The following spring, bassist Krist Novoselic coordinated a benefit for Bosnian rape survivors, a concert that also featured L7 and the Breeders.

Sexual assault was a common theme in Nirvana songs, and the topic was apparently close to Cobain's heart.  While promoting the band's breakthrough album Nevermind in 1991, Cobain called rape "one of the most terrible crimes on Earth," and lamented that it occurred "every few minutes."  The actual statistic is that a woman is raped every two minutes  - in the United States alone. The global figure is much higher (and thus more frequent).

Cobain also criticized the inherent hypocrisy of solutions rooted in women's self-defense, offering instead, "What really needs to be done is teaching men not to rape. Go to the source and start there."  Nirvana later performed at a fundraising concert for the investigation into the rape and murder of Mia Zapata, singer of the Seattle band the Gits.  After Cobain's death, a Nirvana track also appeared on a benefit album for Home Alive, a women's self-defense center established to honor Zapata.

At their core, Nirvana's politics were largely humanitarian, and for Cobain, they were rooted in a childhood of ostracism and bullying in the small town of Aberdeen, Washington.  Frequently beat up and labeled a "faggot," the small-framed Cobain's revenge came through a can of spray paint, which he reportedly used to tag "HOMOSEX RULES" and "GOD IS GAY" on the pick-up trucks of locals.  As Cobain told the LGBT-focused magazine the Advocate in 1992, his close friendships with women and frequent clashes with "redneck jocks" had led him, at times, to question his own sexuality.

But while the trucks of Aberdeen provided a somewhat limited canvas, Nirvana's success gave Cobain a broader platform for expressing his indignation.  In the liner notes to the platinum-selling Incesticide record, a distraught Cobain relays the story of two rapists who sang the band's song "Polly" while committing their crime.  He then pleads with Nirvana's fans that if they "in any way hate homosexuals, people of different color, or women, please...leave us the fuck alone!  don't come to our shows and don't buy our records."  Cobain again emphasized this point in a 1992 SPIN cover story, telling the magazine, "I would like to get rid of the homophobes, sexists, and racists in our audience. I know they're out there, and it really bothers me."

Nirvana's penchant for wearing women's clothing (in concerts, photo shoots, and the video for "In Bloom"), as well as the kisses they exchanged on Saturday Night Live, further distanced the band from patriarchal gender and sexuality norms  - and from its arena rock contemporaries. Nirvana's distaste for machismo, racism, and misogyny also led to a public feud with notoriously intolerant hair rockers Guns N' Roses, who repeatedly threatened to beat them up.

Nirvana was a punk rock band.  Their three-pronged stance against bigotry (racism, sexism, and homophobia) had been well established in the 1980s punk underground by publications like MaximumRocknRoll, bands like Fugazi and MDC, and venues such as 924 Gilman Street in Berkeley, California.  But though they dutifully delivered this message to a popular audience, many of Nirvana's biggest critics were from a punk movement that never forgave them for working with the corporate music industry.

In their few brief years of stardom, Nirvana navigated a difficult terrain, with a hostile punk community on one side, and on the other, an endless series of concert promoters, music journalists, and industry insiders, who hoped to use the band as a means to their next paycheck.  While never completely regretting the decision to sign with a major label, Cobain clearly struggled with the isolation that it created.  He resented accusations of "selling out" and pleaded that beyond fame and fortune, signing with DGC Records also ensured that Nirvana albums would be available to young people who had not already found an inroad to punk. As Cobain explained, "In some small towns, Kmart is the only place that kids can buy records."

Cobain, Novoselic, and drummer Dave Grohl were reluctant rock stars, and in the tradition of early punks the Sex Pistols, they continually stuck their fingers in the entertainment industry's collective eye.  On multiple occasions, the band agreed to play their popular hits on national television broadcasts, only to switch to their most abrasive songs at the last minute.  Cobain also famously arrived for a Rolling Stone photo shoot wearing a homemade T-shirt that playfully read, "Corporate Magazines Still Suck."  To his surprise, the band still made the magazine's cover.

Nirvana, and Cobain in particular, also attempted to use the band's fame to focus attention on lesser-known artists like the Vaselines, Daniel Johnston, the Meat Puppets, Flipper, and Jawbreaker by covering their songs, mentioning them in interviews, wearing their T-shirts, and inviting them to join the band on tour.  In 1992, the band released a split single with legendary Chicago indie rockers the Jesus Lizard, and before Cobain's death, the band had been in negotiations to join the national Lollapalooza tour and shape its lineup to their liking.  Despite being shunned by the punk underground, Nirvana in many ways served as a welcoming committee, ushering a generation of young outcasts into the rebel community that had been their own refuge years earlier.

In the twenty years since Kurt Cobain's suicide, Dave Grohl has become a rock star in his own right, as the frontman for the Foo Fighters and a sometime member of Queens of the Stone Age.  Krist Novoselic has played in a number of musical ensembles, written a book about electoral politics, and directed a film about the band L7.  Nirvana as a whole, however, remains frozen in time.

Nirvana was a part of a broad cultural reaction to the conservatism of the 1980s  - a moment that included the punk-feminist Riot Grrrl movement as well as anthems against police brutality by N.W.A., Ice T, and Public Enemy  - but the band's legacy has been largely limited to the narrow confines of Cobain's personal life. Even before Cobain's death, "Kurt and Courtney" was already just another iteration of the sexist narrative about well-loved bands whose helpless male members were corrupted by evil women.  And while Courtney Love plays an effective villain, Cobain took great offense to attempts to portray him as a victim.  He proudly insisted that their relationship was a 50-50 partnership.

Much of the focus on Kurt Cobain's contribution to American culture has centered on fetishizing the fact that he shared his final age, 27, with many other prominent artists. A more important lens through which to remember Cobain and his band is a story relayed by his uncle at a public memorial service.  As happened often, a neighborhood bully was beating up a young Cobain, knocking him to the ground over and over again.  But rather than punching the bully back or cowering in fear, Cobain instead, after each knock down, simply extended his middle finger in defiance.

Kurt Cobain was an entertainer, not an activist, and he took pains to make that distinction clear.  His politics were nonetheless straight-forward.  Like Catcher in the Rye protagonist Holden Caulfield, Cobain's frustration and fury were fueled by human empathy.  He would have been repulsed by Rush Limbaugh's "slut-shaming" comments about Sandra Fluke.  He would have denounced transphobic attempts to ridicule Private Chelsea Manning.  He would have been devastated by the murders of young Islan Nettles and Trayvon Martin, and his heart would have broken over the tormented suicides of Lizzy Seeberg and Tyler Clementi.

In an early draft of "Smells Like Teen Spirit," Kurt Cobain asked, "Who Will be the King and Queen of the Outcast Teens?"  For a brief moment, he himself was the answer. Cobain did not view himself as larger than life, and he openly mocked the suggestion that he might be a spokesperson for his generation.  Nirvana nonetheless set a standard for human decency that very few pop stars have lived up to.

Nirvana was a champion for misfits, and Kurt Cobain was the king of the outcasts.

[Dawson Barrett completed his PhD in History at the University of Wisconsin-Milwaukee in 2013.  His dissertation explores the impacts of neoliberal policies on American activism since the 1960s.  His article "DIY Democracy:  The Direct Action Politics of US Punk Collectives" appears in the Spring 2013 issue of the journal American Studies.]