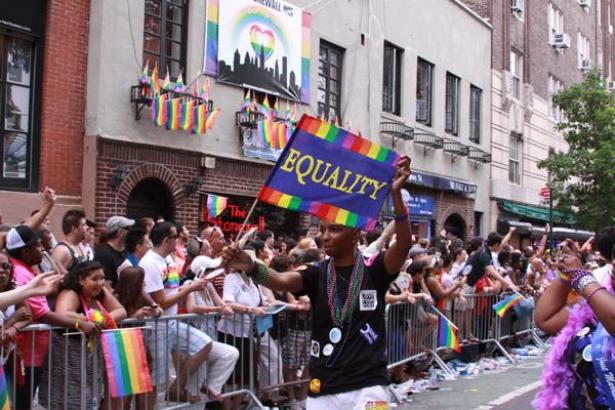 The Anti-Racist Vet By Aliza Worthington, Crooks and Liars

The Pro-Abortion Rights Valedictorian  By Alexandra Villarreal, The Guardian

The controversy surrounding Heritage of Pride’s decision to not allow uniformed and armed police officers to march as a part of our annual celebration has centered around the ideal of the LGBTQIA+ movement being “inclusive.” The backlash against the decision again exposed to the straight world the dirty little secret of the wider LGBTQIA+ community: it’s not.

Book: The History-Changing Story of ACT UP

By Joshua Gutterman Tranen
The Baffler

Let the Record Show is structured around oral histories collected over the course of nearly twenty years for the ACT UP Oral History Project. Collective anger against the AIDS crisis existed before ACT UP, and many of the white gay men in the group looked to women, lesbians, and people of color with previous activist experience for inspiration.

A Trevor Project survey found that LGBTQ youth who had at least one accepting adult were 40% less likely to report suicide attempts in the past year.

The Progress of QAnon

Tensions are escalating in cities around the country where local elections have been won by people who appear to support, or in some instances openly support, QAnon and its associated conspiracy theories.

Is Democracy On the Ropes?

The Economist Intelligence Unit, which produces a Democracy Index every year, promoted its 2020 report with the headline “Global Democracy Has a Very Bad Year.” But democracy might be in for a comeback.

Two leading scholars on the topic of critical race theory spoke with Fox News for an exclusive interview to discuss their views on the controversial concept and why they believe it is being unfairly characterized by opponents.

American Jews and the Israel Narrative

Many Jews in the United States are taught a very specific Israel narrative. Can that change? Recently social media has been filled with American Jews denouncing some of the institutions that claim to represent them, often for the imbalanced Israel education they received as children.

By Roger Sollenberger
The Daily Beast

In the months leading up to the 2020 election, Sarah Ashton-Cirillo, a self-described progressive activist, embedded herself in GOP circles as part of her research for a book on right-wing extremism. What she found was a Republican consultant desperate to team the Proud Boys up with the Nevada GOP in order to challenge ballots and flip the presidential election.