"The Second Machine Age," by MIT professors Erik Brynjolfsson and Andrew McAfee, has gotten a lot of attention for its bold predictions of a forthcoming giant leap forward in the kinds of tasks that smart machines (robots) will be capable of performing. This could have a major impact on the nature of work, the number of jobs, the kinds of jobs, and the kind of society we will have in the future. 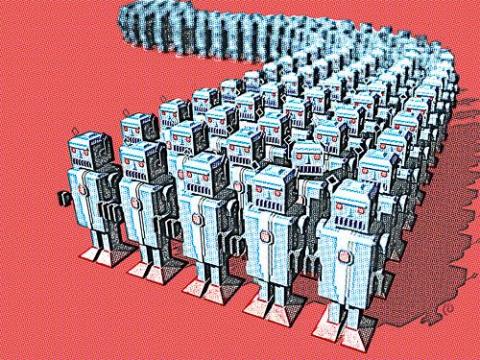 Over the past year, there’s been a lot of talk in economic circles about the prospect of stagnation. Because of demographics, globalization, long-term global imbalances and a slowdown in technological innovation, the argument goes, advanced economies are trapped in an extended period of slow growth in productivity, income and job creation. Recent proponents of this hypothesis include economists Robert Gordon of Northwestern University and Michael Spence of New York University; former Treasury secretary Lawrence Summers; and Tyler Cowen, my colleague at George Mason University, in his latest book, “Average Is Over.”

Now come two professors from MIT with a more optimistic and intriguing hypothesis — namely, that the global economy is on the cusp of a dramatic growth spurt driven by smart machines that finally take full advantage of advances in computer processing, artificial intelligence, networked communication and the digitization of just about everything.

“The Second Machine Age” is largely a reprise of an e-book, “Race Against the Machine,” that Erik Brynjolfsson and Andrew McAfee self-published two years ago. It builds on their work at MIT’s Center for Digital Business, along with that of “new growth” theorists such as Paul Romer, Brian Arthur and Martin Weitzman. And while Brynjolfsson and McAfee’s policy prescriptions reflect the somewhat self-referential outlook that you run across in technology enclaves such as Silicon Valley and Cambridge, their book offers a timely antidote to the economic pessimism that has taken root in the aftermath of the financial crisis.

Brynjolfsson’s and McAfee’s optimism springs from the idea of exponential growth — in the computing power of machines, in the amount of digital information that is being created and in the number of relatively cheap devices that are continually talking to each other. When these numbers doubled every year or two in the early days of the computer revolution, the results, while impressive, were still within our ability to imagine. But now that the numbers are so staggeringly large, the authors argue that machines can finally do things once considered possible only in the realm of science fiction.

It’s not just that machines can now beat humans in chess or on “Jeopardy.” It’s that when they are combined with thousands of cheap sensors and huge databases, they can drive your car up and down a highway in safety and find the best way to get you where you want to go — not only because every road map has been scanned into the database, but also because every cellphone transmitting from every car will reveal where the traffic jams are. It’s that robots can now scan and identify all the objects in a strange room, allowing them to perform a series of complex physical tasks. It’s that a computer can translate from one language to any other, not because it has learned to speak them but because it recognizes patterns based on everything that’s been written in a language so far. Computers can not only read and grade essays, they can write them.