Is the U.S. Backing Neo-Nazis in Ukraine?

Exposing troubling ties in the U.S. to overt Nazi and fascist protesters in Ukraine. White supremacist banners and Confederate flags were draped inside Kiev's occupied City Hall, and demonstrators have hoisted Nazi SS and white power symbols over a toppled memorial to V.I. Lenin. Sieg heil salutes and the Nazi Wolfsangel symbol have become an increasingly common site in Maidan Square, and neo-Nazi forces have established "autonomous zones" in and around Kiev. 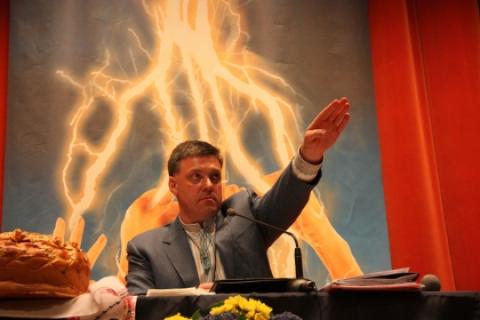 This is Oleh Tyahnybok, he has claimed a "Moscow-Jewish mafia" rule Ukraine and that "Germans, Kikes and other scum" want to "take away our Ukrainian state.", libcom.org

As the Euromaidan protests in the Ukrainian capitol of Kiev culminated this week, displays of open fascism and neo-Nazi extremism became too glaring to ignore. Since demonstrators filled the downtown square to battle Ukrainian riot police and demand the ouster of the corruption-stained, pro-Russian President Viktor Yanukovich, it has been filled with far-right streetfighting men pledging to defend their country's ethnic purity.

White supremacist banners and Confederate flags were draped inside Kiev's occupied City Hall, and demonstrators have hoisted Nazi SS and white power symbols over a toppled memorial to V.I. Lenin. After Yanukovich fled his palatial estate by helicopter, EuroMaidan protesters http://rt.com/news/war-monument-toppled-ukraine-351/ a memorial to Ukrainians who died battling German occupation during World War II. Sieg heil salutes and the Nazi Wolfsangel symbol have become an increasingly common site in Maidan Square, and neo-Nazi forces have established "autonomous zones" in and around Kiev.

An Anarchist group called AntiFascist Union Ukraine attempted to join the Euromaidan demonstrations but found it difficult to avoid threats of violence and imprecations from the gangs of neo-Nazis roving the square. "They called the Anarchists things like Jews, blacks, Communists," one of its members said. "There weren't even any Communists, that was just an insult."

"There are lots of Nationalists here, including Nazis," the anti-fascist continued. "They came from all over Ukraine, and they make up about 30% of protesters."

One of the "Big Three" political parties behind the protests is the ultra-nationalist Svoboda, whose leader, Oleh Tyahnybok, has called for the liberation of his country from the "Muscovite-Jewish mafia." After the 2010 conviction of the Nazi death camp guard John Demjanjuk for his supporting role in the death of nearly 30,000 people at the Sobibor camp, Tyahnybok rushed to Germany to declare him a hero who was "fighting for truth." In the Ukrainian parliament, where Svoboda holds an unprecedented 37 seats, Tyahnybok's deputy Yuriy Mykhalchyshyn is fond of quoting Joseph Goebbels -- he has even founded a think tank originally called "the Joseph Goebbels Political Research Center." According to Per Anders Rudling, a leading academic expert on European neo-fascism, the self-described "socialist nationalist" Mykhalchyshyn is the main link between Svoboda's official wing and neo-Nazi militias like Right Sector.

Right Sector is a shadowy syndicate of self-described "autonomous nationalists" identified by their skinhead style of dress, ascetic lifestyle, and fascination with street violence. Armed with riot shields and clubs, the group's cadres have manned the front lines of the Euromaidan battles this month, filling the air with their signature chant: "Ukraine above all!" In a recent Right Sector propaganda video [embedded at the bottom of this article], the group promised to fight "against degeneration and totalitarian liberalism, for traditional national morality and family values." With Svoboda linked to a constellation of international neo-fascist parties through the Alliance of European National Movements,  Right Sector is promising to lead its army of aimless, disillusioned young men on "a great European Reconquest."

Svoboda's openly pro-Nazi politics have not deterred Senator John McCain from addressing a EuroMaidan rally alongside Tyahnybok, nor did it prevent Assistant Secretary of State Victoria Nuland from enjoying a friendly meeting  with the Svoboda leader this February. Eager to fend off accusations of anti-Semitism, the Svoboda leader recently hosted the Israeli Ambassador to Ukraine. "I would like to ask Israelis to also respect our patriotic feelings," Tyahnybok has remarked. "Probably each party in the [Israeli] Knesset is nationalist. With God's help, let it be this way for us too."

In a leaked phone conversation with Geoffrey Pyatt, the US ambassador to Ukraine, Nuland revealed her wish for Tyahnybok to remain "on the outside," but to consult with the US's replacement for Yanukovich, Arseniy Yatsenyuk, "four times a week." At a December 5, 2013 US-Ukraine Foundation Conference, Nuland boasted that the US had invested $5 billion to "build democratic skills and institutions" in Ukraine, though she did not offer any details.

"The Euro-Maidan movement has come to embody the principles and values that are the cornerstones for all free democracies," Nuland proclaimed.

Two weeks later, 15,000 Svoboda members held a torchlight ceremony in the city of Lviv in honor of Stepan Bandera, a World War II-era Nazi collaborator who led the pro-fascist Organization of Ukrainian Nationalists (OUN-B). Lviv has become the epicenter of neo-fascist activity in Ukraine, with elected Svoboda officials waging a campaign to rename its airport after Bandera and successfully changing the name of Peace Street to the name of the Nachtigall Battalion, an OUN-B wing that participated directly in the Holocaust. "'Peace' is a holdover from Soviet stereotypes," a Svoboda deputy explained. 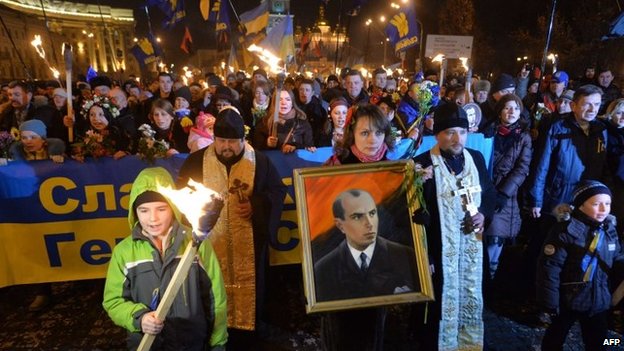 Revered by Ukrainian nationalists as a legendary freedom fighter, Bandera's real record was ignominious at best. After participating in a campaign to assassinate Ukrainians who supported accommodation with the Polish during the 1930's, Bandera's forces set themselves to ethnically cleanse western Ukraine of Poles in 1943 and 1944. In the process, they killed over 90,000 Poles and many Jews, whom Bandera's top deputy and acting "Prime Minister," Yaroslav Stetsko, were determined to exterminate. Bandera held fast to fascist ideology in the years after the war, advocating a totalitarian, ethnically pure Europe while his affiliated Ukrainian Insurgent Army (UPA) carried out a doomed armed struggle against the Soviet Union. The bloodbath he inspired ended when KGB agents assassinated him in Munich in 1959.

Many surviving OUN-B members fled to Western Europe and the United States -- occasionally with CIA help -- where they quietly forged political alliances with right-wing elements. "You have to understand, we are an underground organization. We have spent years quietly penetrating positions of influence," one member told journalist Russ Bellant, who documented the group's resurgence in the United States in his 1988 book, "Old Nazis, New Right, and the Republican Party."

In Washington, the OUN-B reconstituted under the banner of the Ukrainian Congress Committee of America (UCCA), an umbrella organization comprised of "complete OUN-B fronts," according to Bellant. By the mid-1980's, the Reagan administration was honeycombed with UCCA members, with the group's chairman Lev Dobriansky, serving as ambassador to the Bahamas, and his daughter, Paula, sitting on the National Security Council. Reagan personally welcomed Stetsko, the Banderist leader who oversaw the massacre of 7,000 Jews in Lviv, into the White House in 1983.

"Your struggle is our struggle," Reagan told the former Nazi collaborator. "Your dream is our dream." 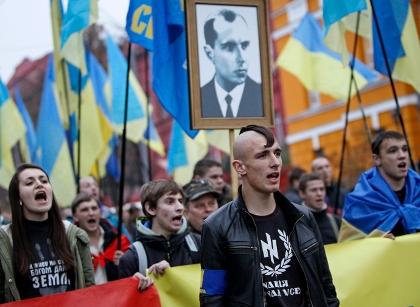 Activists of the Svoboda (Freedom) Ukrainian nationalist party shout slogans as they take part in a rally marking the 71st anniversary of the Ukrainian Insurgent Army (UPA), which fought both Nazi and Soviet forces in World War Two, and the feast of the Protecting Veil of the Mother of God in central Kiev, October 14, 2013.
REUTERS/ Gleb Garanich // RT.com

When the Justice Department launched a crusade to capture and prosecute Nazi war criminals in 1985, UCCA snapped into action, lobbying Congress to halt the initiative. "The UCCA has also played a leading role in opposing federal investigations of suspected Nazi war criminals since those queries got underway in the late 1970's," Bellant wrote. "Some UCCA members have many reasons to worry -- reasons which began in the 1930's."

Still an active and influential lobbying force in Washington, the UCCA does not appear to have shed its reverence for Banderist nationalism. In 2009, on the 50th anniversary of Bandera's death, the group proclaimed him "a symbol of strength and righteousness for his followers" who "continue[s] to inspire Ukrainians today." A year later, the group honored the 60th anniversary of the death of Roman Shukhevych, the OUN-B commander of the Nachtigall Battalion that slaughtered Jews in Lviv and Belarus, calling him a "hero" who "fought for honor, righteousness..."

Back in Ukraine in 2010, then-President Viktor Yushchenko awarded Bandera the title of "National Hero of Ukraine," marking the culmination of his efforts to manufacture an anti-Russian national narrative that sanitized the OUN-B's fascism. (Yuschenko's wife, Katherine Chumachenko, was a former Reagan administration official and ex-staffer at the right-wing Heritage Foundation). When the European Parliament condemned Yushchenko's proclamation as an affront to "European values," the UCCA-affiliated Ukrainian World Congress reacted with outrage, accusing the EU of "another attempt to rewrite Ukrainian history during WWII." On its website, the UCCA dismissed historical accounts of Bandera's collaboration with the Nazis as "Soviet propaganda."

Following the demise of Yanukovich this month, the UCCA helped organize rallies in cities across the US in support of the EuroMaidan protests. When several hundred demonstrators marched through downtown Chicago, some waved Ukrainian flags while others proudly flew the red and black banners of the UPA and OUN-B. "USA supports Ukraine!" they chanted. 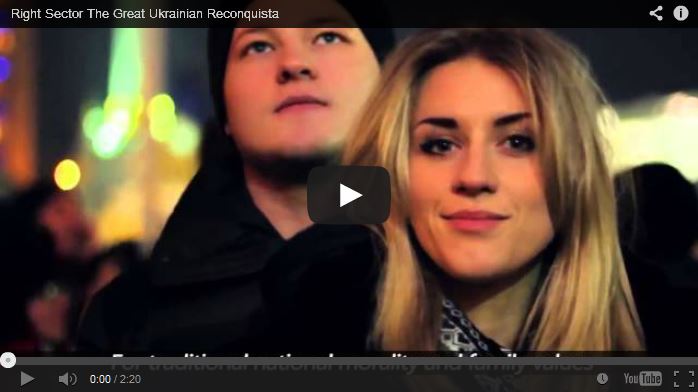 [Max Blumenthal is an award-winning journalist and best-selling author whose articles and video documentaries have appeared in The New York Times, The Los Angeles Times, The Daily Beast, The Nation, The Guardian, The Independent Film Channel, The Huffington Post, Salon.com, Al Jazeera English and many other publications. He is a writing fellow for the Nation Institute. His book, Republican Gomorrah: Inside The Movement That Shattered The Party, is a New York Times and Los Angeles Times bestseller.]