"Moral Mondays" movement spreads in South as a coalition of the NAACP, other activist organizations, including unions, rallied Monday in Tallahassee, one day ahead of the opening of Florida's 2014 legislative session. 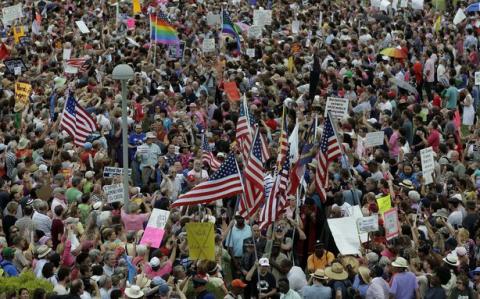 Demanding Medicaid expansion, voting rights, repeal of the “stand your ground” self-defense law — as well as favorable economic policies — a coalition of activist groups and organized labor unions rallied Monday at the Florida Capitol, one day ahead of the 2014 legislative session.

The National Association for the Advancement of Colored People hosted the event, which featured several civil rights leaders and Democratic lawmakers.

“We would like to see justice for all, not just one side. We got to make sure it’s across the board, but it ain’t across the board yet,” Kojak Burnett of Brooksville, wearing an American flag hat and NAACP insignia,  told Watchdog.org,

Burnett said the Legislature should keep social programs in place instead of cutting them, and he wants to see Medicaid expanded so “people won’t suffer as much.”

The U.S. Supreme Court in 2012  ruled states have the option to expand Medicaid up to 138 percent of the federal poverty level, under Obamacare. Republican Gov. Rick Scott supported such an expansion. But, citing cost concerns and various program issues, state lawmakers rejected it.

“Our state should no longer abide by the atrocities wreaked on the poor, the young, the working-class, people of color and countless other constituencies,” Adora Obi Nweze, president of the NAACP Florida State Conference, said in a previously released statement [3].

The rally included the Florida AFL-CIO, the Florida SEIU and the state chapter of AFSCME. Speakers recognized the unions, to enthusiastic applause, though no sign of organized labor groups were visible in the crowd of several hundred.

Moral Mondays began during the 2013 North Carolina legislative session and have since spread to other state capitols in the Southeast.

The movement coincides with a larger, national strategy outlined by the AFL-CIO during its national conference last year. Partnerships with social justice groups and so-called worker centers, such as Orlando’s Jobs with Justice, are now viewed as lifelines against historically low private-sector membership.

“The labor movement cannot be confined within bargaining units defined by government agencies or limited to workplaces where a majority of employees vote “Yes” in the face of a ruthless campaign by their employer to deny them representation,” states a newly adopted AFL-CIO resolution [4].

Expanding union membership in the Southeast is viewed by the AFL-CIO as both an area for growth and a worst-case scenario. With the exception of Alabama, Florida’s unionized labor force ranks highest in the Southeast — at just 5.6 percent.

“Organize the South, that’s my mantra,” MaryBe McMillan, secretary-treasurer of the North Carolina AFL-CIO, said during a Feb. 17 panelist discussion [5] invoking Moral Mondays, fast food strikes and unionization strategies. “It’s what I say over and over again because I believe that for the labor movement and worker justice, it is organize the South or die.”

While many recognize the need for more social and economic advancement opportunities for Florida’s African-American community, the way forward is the subject of debate.

State lawmakers have unveiled “Workplan 2014,” largely a jobs and education agenda but without significant investment in state social programs. The pro-economic growth agenda does not include expanding Medicaid.

As Watchdog.org reported last week, the AFL-CIO has marked Florida as a midterm election battleground ripe for labor investment, namely the governor’s race.

But even if electoral outcomes favor the social justice, labor alliance, Florida workers aren’t likely to run out and join the labor ranks, said Russ Brown, president of the Center for Independent Employees.

“Part of the reason for the decline in private-sector unions is that employees today already get what unions used to fight for,” Brown told Watchdog.org. “Its just part of being an everyday worker now.”

Brown cites a United Automobile Workers vote in Tennessee last month as an example of what would happen in Florida.

“By secret ballot and without employer intimidation, workers were given the chance to join the UAW but by a majority vote said ‘No.’”

Said Burnett, “We are still struggling. We got to keep the dream alive.”