UAW Local 2865 has called a strike. For many grad students, the very idea of a contract governing the limits and conditions of our labor is a source of skepticism and even derision. This system is not an alternative to the working world - it is the model every employer would eagerly adopt. Far from prefiguring an emancipated society, the university offers a foretaste of the total domination of workers by management. 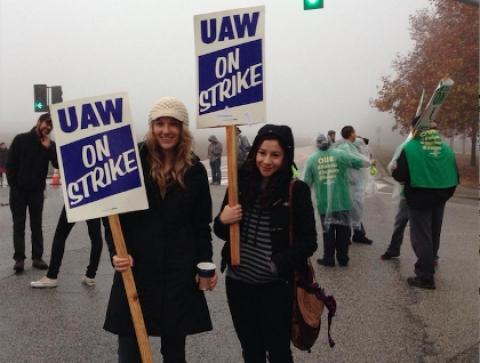 This week, our union, United Auto Workers Local 2865, has called a system-wide strike in protest of unfair labor practices (ULPs) by the university. Although particular grievances differ from campus to campus, in aggregate, they concern the university's unwillingness to bargain over key aspects of our employment, including class size and the number of terms (quarters, semesters) students are able to work. Also at issue is the university's history of illegal intimidation of student workers. For example, this past November, an administrator at UCLA threatened overseas students with the loss of their visas for participating in a sympathy strike - a claim as insulting as it was untrue.

The reasons for striking are serious, but also banal. By any measure, our labor is appallingly undervalued by the managers of the UC, its remuneration calibrated neither to the ballooning costs of living in present-day California nor to the wages of our peers at equivalent out-of-state universities. Nonetheless, many of us persist in believing that, no matter how untenable or degrading, our working conditions can always be tolerated, since they are only temporary, lasting no longer than our apprenticeships.

The ideology of grad school rationalizes this deficit as the price of shelter from the "working world," of which the academy is surely the opposite. Those who do not support the strike will claim that grad students are not workers at all, but rather professionals in the chrysalis stage of a post-laborious life cycle. Labor is the fate of the unlucky, the futureless, the unspecial - of all who fail admittance to the academy, or who find themselves passed over in the competition for grants, honors, and jobs. Today's strikers, tomorrow's adjuncts.

The academy has always warmed to such delusions. To exist, universities depend on the extraction of un- and underpaid labor from students and faculty, exploiting a population convinced of its special intelligence and competitive edge. Fear of imposture, of mere adequacy, is the coin of the academic realm. As minter of this coin, the university holds its subjects in a state of blind dependency: students compete for the attention of a shrinking pool of professionals (part-time instructors currently outnumber tenure-track faculty by a ration of four to one), while the latter scurry to commodify the drippings of a hive-mind on the brink of colony collapse.

A population that does not recognize itself as working will not mind working harder, longer, and more obediently, whatever the personal cost.

For many grad students, the very idea of a contract governing the limits and conditions of our labor is a source of skepticism and even derision. This system is not an alternative to the working world - it is the model every employer would eagerly adopt. Far from prefiguring an emancipated society, the university offers a foretaste of the total domination of workers by management.

Perhaps our peers are right: perhaps we strikers are the futureless, the luckless, the unspecial. To which we should reply - Yes, and so are you! Of course, logic dictates that some of us will be retained by the academy as its favored prodigies; that some of us will best our peers on a tightening job market; that odds will always (ever) be in someone's favor. But this is not a logic, not a system, that we could ever willingly endorse. The university profits by our atomization, our disunity; it encourages our delusions of specialness, our faith in anointment and meritocratic providence; it thrives on our belief, against every shred of evidence, that we are not workers.

There are no fair labor practices in the academy or anywhere else; there are only gains the we win for ourselves, together, fighting.