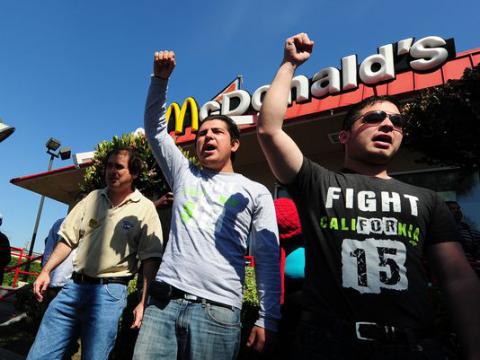 Protesters shout slogans in front of a McDonald's restaurant in south Los Angeles where fast-food workers and their suporters gathered to protest wage theft on April 3, 2014 in California. , FREDERIC J. BROWN AFP/Getty Images

The fast-food worker movement for higher pay is about to go global.

Workers from dozens of countries on six continents are joining the push for higher pay and worker rights, it was announced Wednesday at a press conference outside a McDonald's restaurant in Midtown Manhattan by Fast Food Forward, which represents U.S. fast-food workers.

The group announced nationwide strike plans for May 15 -- a date which mirrors the $15 per hour pay they are demanding. On that same date, workers from dozens of countries on six continents will hold protests at McDonald's, Burger King and KFC outlets. It is not known how many workers will strike, but thousands of the nation's estimated 4 million fast-food workers are expected to take part in the one-day strike.

"We've gone global," said Ashley Cathey, a McDonald's worker from Memphis, Tenn., who makes $7.75 an hour after six years on the job. "Our fight has inspired workers around the world to come together."

For the fast-food industry, this seems to be the issue that just won't go away. It's expected to be front-and-center later this month when McDonald's hosts it annual shareholders meeting on May 22, in Oak Brook, Ill.

About 80% of McDonald's global restaurants are independently owned and operated by small business owners, said McDonald's spokeswoman Heidi Barker Sa Shekhem, in a statement. "This is an important discussion that needs to take into account the highly competitive nature of the industries that employ minimum wage workers, as well as consumers and the thousands of small businesses which own and operate the vast majority of McDonald's restaurants."

McDonald's stock was up about slightly under 1% in late-day trading at 101.80.

While not specifically addressing fast-food workers, President Obama has called on Congress to raise the national minimum wage from $7.25 to $10.10 an hour, and earlier this year signed an executive order to raise the minimum wage to $10.10 for individuals working on new federal service contracts.

Some of the foreign protesters say they are taking action specifically in sympathy with U.S. workers. Louise Marie Rantzau, who is a McDonald's worker in Denmark, says she makes $21 an hour. She says she was surprised to hear U.S. workers have to fight so hard to make $15 an hour, and she says is "committed" to supporting their cause.