In recent years, workers across the country have been turning their aspirations into action, staging more than 1,100 strikes and protests between June 2011 and the end of 2013, according to China Labor Bulletin. In a sign that labor unrest is rising, there have been more than 200 strikes, including 85 in the manufacturing sector, in the past two months alone, the group said. 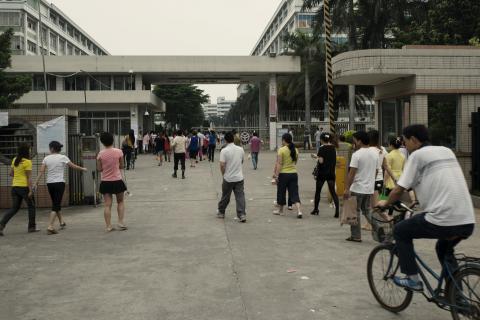 Workers arrived at a Yue Yuen factory in Dongguan on Tuesday, a few days after the end of a two-week strike. , Gilles Sabrie for The New York Times

DONGGUAN, China — The call to action, carried by social media to thousands of smartphones across this bleak factory town, roused the workers from their jobs making Nike and Adidas sneakers.

Their Taiwanese employer, Yue Yuen Industrial Holdings, the world’s largest manufacturer of branded athletic shoes, had for years underpaid the social security contributions that employees were counting on for retirement.

News of the shortfall, discovered and disseminated by a newly retired worker, stirred familiar resentments. But it was the company’s refusal to make amends that led to one of China’s largest strikes in recent memory, involving 40,000 workers who stayed off assembly lines for two weeks and cost Yue Yuen about $27 million in losses.

Last week, after government officials stepped in to resolve the impasse, the company announced it would make up the missing payments and start fully funding worker pensions as required by Chinese law.

Although played down by the state-run news media, the mass walkout illustrates the growing might of Chinese workers amid a shrinking labor pool, a slowing economy and the Communist Party’s fears of social unrest. The strike also highlights the increasing potency of social media despite the government’s best efforts to limit news and information that might inspire workers to stand up to employers who can fire troublemakers at will — or call on the police to jail labor organizers.

“Chinese workers now have greater bargaining power, and they know how to use this power,” said Geoffrey Crothall, communications director at China Labor Bulletin, an advocacy group in Hong Kong.

The proletariat may be a vaunted pillar of Mao’s Communist revolution, but the workaday reality for China’s low-wage army of factory workers long ago eclipsed their hallowed status. On paper, Chinese workers are afforded generous rights and protections, but since the introduction of market reforms in the 1980s, factory owners, many of them multinational companies from Taiwan, Japan and Hong Kong, have often set the terms of employment.

Independent trade unions are illegal in China, and government-backed unions are more interested in quickly defusing labor disputes than delivering on worker grievances. For years, a seemingly limitless supply of pliable young workers, many of them uneducated migrants from China’s rural hinterland, ensured that the factory owners could dictate wages and work hours.

But that power dynamic has begun to shift, fueled in part by increasing opportunities in the country’s expanding service sector and a shrinking work force. The mounting labor shortage has strengthened the hand of Chinese workers, who increasingly demand better work conditions, higher pay and perks like days off.

Last year, China’s 269 million migrant workers earned an average of $410 a month, an increase of nearly 14 percent from 2012 and almost twice the growth rate in the nation’s gross domestic product.

These gains do not come easily. In recent years, workers across the country have been turning their aspirations into action, staging more than 1,100 strikes and protests between June 2011 and the end of 2013, according to China Labor Bulletin. In a sign that labor unrest is rising, there have been more than 200 strikes, including 85 in the manufacturing sector, in the past two months alone, the group said.

Technology is aiding that trend. Better educated than their parents and as nimble on a computer as they are on an assembly line, blue-collar workers have become well versed in labor law, less tolerant of onerous schedules and more willing to share complaints beyond their immediate circle of co-workers.

Perhaps most worrisome to Chinese authorities, during the Yue Yuen strike, workers and administrative staff joined together largely without the help of protest leaders, who can be easily neutralized by the police. Employees turned to social media and spread messages faster than censors could stop them. Their most effective weapon was the popular mobile messaging program Weixin, which has nearly 300 million users in China and is also known by its English name, WeChat.

“Before, we were naïve and always getting tricked,” said Xiao Zhixiong, 30, a migrant from China’s central Hunan Province who makes sneaker molds. “Now, we’re learning to be smart.”

Sprawled along a fetid river that winds through Gaobu township, the No. 3 Yue Yuen complex includes factories, dormitories and a basketball court. Just beyond the gates, fruit vendors and noodle restaurants compete for workers’ hard-earned cash, as does a sleek Footzone shoe store owned by the company. Above its doors, a purple billboard advertising Nike Air Max sneakers is emblazoned with the word “defy” — an exhortation that might sound empowering to Western consumers, but is downright subversive in China.

On April 14, defy is what tens of thousands of workers did. A month earlier, Yue Yuen employees discovered that the company was calculating pension contributions on their base wages, rather than total incomes that included lucrative overtime. Despite sporadic street protests and entreaties to the government-backed union, the company repeatedly rejected their demands for the unpaid benefits, as well as a pay raise and an improved contract, workers said.

“The factory director told us, ‘If you’re looking for us to repay, I can tell you it’s not going to happen,’ ” said Liu Hai, 52, an assembly line worker who attended a morning meeting of management and a group of employees. “That afternoon, people just started walking off little by little.”

Fueled by social media, the trickle became a flood. Huge crowds gathered outside the factory gates, while others just sat idly at their workstations. Mr. Liu, who earns a monthly base wage of $210 after 20 years with the company, was careful not to protest outside, where thousands of police officers stood guard.

Though the police interrogated Mr. Liu for his online comments, forcing him to sign a document promising not to cause trouble, he remained defiant. “We’re fighting for our rights,” he said recently over a plate of stir-fried pig intestines. “Even if I go to prison I won’t regret it.”

While Yue Yuen agreed to reimburse pension contributions and increase a monthly living subsidy by $37, the outcome is something of a Pyrrhic victory for its workers. In order to claim the past benefits, employees must pay matching funds, which for many amounts to years of savings they do not have.

“Worker wages are barely enough to feed their families now,” said Wang Kongxia, 38, who has worked at Yue Yuen for 19 years. “A lot of people feel quite helpless.”

Despite those misgivings, workers say, Chinese authorities and Yue Yuen used subterfuge to force employees back to the assembly lines. According to Ms. Wang, factory management removed the time clocks for four days this week, requiring employees to sign in every two hours or be fired. Supervisors were also asked to photograph each employee. “We didn’t do it,” she said.

Zhen Fanfei, 35, has gone back to making Adidas midsoles, but he doubts the company will be more respectful of workers’ demands without a major change in the government’s attitude.

“Capitalists will always be capitalists,” he said.