Inside squalid quarters, bedrooms are so crowded that men must sleep three to a stack — one on the upper bunk, one on the lower bunk and one below the lower bunk, separated from the floor by only a thin pad for a mattress. In the space between the beds, the men pile cauliflower, onions and sacks of Basmati rice to cook after working all day and washing the construction dirt from their clothes. Exposed wiring hangs from the ceiling, and cockroaches climb the walls. 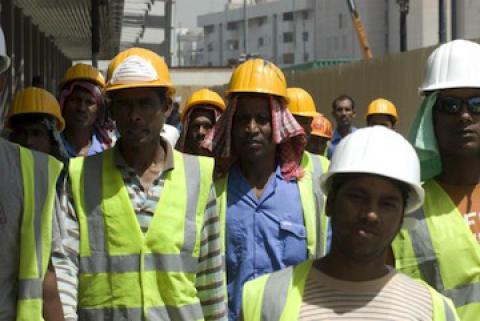 ABU DHABI, United Arab Emirates — The strike had entered its second day when construction workers at Labor Camp 42 got word that their bosses from the BK Gulf corporation had come to negotiate. Mohammed Amir Waheed Sirkar, an electrician from Bangladesh, scrambled down the stairs to meet them. But when he got to the courtyard, he saw the truth: It wasn’t the bosses who had come. It was the police.

They pounded on doors, breaking some down, and hauled dozens of men to prison. Mr. Sirkar was taken to a Dubai police station, where officers interrogated him. After a while, new officers arrived. That’s when things got rough.

“They beat me up,” he said through an Urdu interpreter, “asking me to confess I was involved in starting the strike.” Others were slapped, kicked, or beaten with shoes, a special indignity in Arab culture.

After nine days in jail, Mr. Sirkar was deported, as were hundreds of other workers.

The forceful response was typical for the United Arab Emirates, where strikes are illegal and labor conditions grim, but most of the men who went on strike last October were working on a project that originated in America: a large new campus for New York University.

Facing criticism for venturing into a country where dissent is not tolerated and labor can resemble indentured servitude, N.Y.U. in 2009 issued a “statement of labor values” that it said would guarantee fair treatment of workers. But interviews by The New York Times with dozens of workers who built N.Y.U.’s recently completed campus found that conditions on the project were often starkly different from the ideal.

Virtually every one said he had to pay recruitment fees of up to a year’s wages to get his job and had never been reimbursed. N.Y.U.’s list of labor values said that contractors are supposed to pay back all such fees. Most of the men described having to work 11 or 12 hours a day, six or seven days a week, just to earn close to what they had originally been promised, despite a provision in the labor statement that overtime should be voluntary.

The men said they were not allowed to hold onto their passports, in spite of promises to the contrary. And the experiences of the BK Gulf strikers, a half dozen of whom were reached by The Times in their home countries, stand in contrast to the standard that all workers should have the right to redress labor disputes without “harassment, intimidation, or retaliation.”

Some men lived in squalor, 15 men to a room. The university said there should be no more than four.

“Not happy,” Munawar, a painter from Bangladesh who only gave one name declared, speaking in limited English. Back home, he said, they have lives, families. “Come here,” he concluded, “not happy.”

N.Y.U. Abu Dhabi is a bold undertaking, matching the ambitions of one of the world’s wealthiest nations with those of America’s largest private university. It is also one of the most closely watched of a growing number of experiments in academic globalization. N.Y.U.’s president, John Sexton, has called the outpost, an entire degree-granting institution, “an opportunity to transform the university and, frankly, the world.”

But Abu Dhabi, the capital of the United Arab Emirates, is an unlikely setting for a university built on the American model. Academic freedom is unheard-of, criticizing government is a crime and an employment system known as kafala leaves millions of immigrant workers tethered to the companies that sponsor their visas.

N.Y.U. has said the campus will be built and run as a “cultural free zone,” where the university’s core values prevail, from the treatment of workers to the protection of scholarly inquiry. The university says that its efforts to ensure humane living and working conditions have been unprecedented.

Told of the laborers’ complaints, officials said they could not vouch for the treatment of individual construction workers, since they are not employees of the university but rather of companies that work as contractors or subcontractors for the government agency overseeing the project. Those companies are contractually obligated to follow the statement of labor values.

To help monitor the situation, an engineering firm, Mott MacDonald, has been on hand to interview workers and prepare annual reports. The latest, released last month, noted some challenges, including a single contractor who fell behind on one month’s wages, but concluded, “Over all, there is strong evidence confirming the N.Y.U.A.D. project is taking workers’ rights seriously.”

The report made no mention of the BK Gulf strike, or the strikers’ demands for more pay.

Mott MacDonald declined to discuss its report. John Beckman, N.Y.U.’s chief spokesman, said in a recent email that university officials were not aware of any unrest and were “working with our partners to have it investigated.”

N.Y.U. Abu Dhabi rises just to the northeast of the city’s busy downtown, on a vast sun-baked expanse called Saadiyat Island. The island, whose name means “happiness” in Arabic, is being developed as a world-class culture destination, with outposts of the Louvre and the Guggenheim Museum that, like its neighbor, were paid for by Abu Dhabi’s ruler, Sheikh Khalifa bin Zayed al-Nahyan.