Fast food workers earn 1,200 times less than CEOs, the widest disparity of any U.S. economic sector. McDonald’s employees make about $8.25 per hour on average before taxes, and the corporation tacitly acknowledges it pays poverty wages. The company drew flak last year for a website that advised its employees to budget by spending nothing on keeping their homes warm, finding a place to live that costs less than $600 a month and spending $20 a month on health insurance. 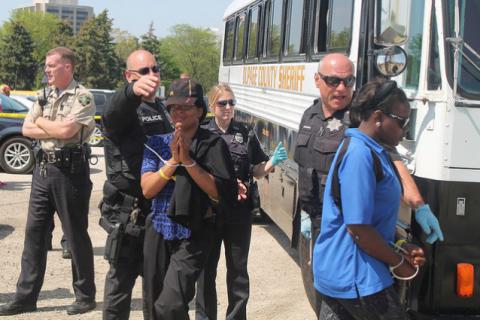 Over 100 workers and dozens more protesters were arrested Wednesday outside McDonald’s headquarters in Oak Brook, IL. , FLICKR USER BOBBOSPHERE
More than 100 workers and dozens of other protesters were arrested during peaceful protests outside McDonald’s corporate headquarters on Wednesday.
On Thursday morning, a thousand McDonald’s workers and their supporters are marching on the company’s Oak Brook, Illinois campus as the company’s annual shareholder meeting kicks off. Those arrested on Wednesday included 101 McDonald’s employees and 37 supporters, including Service Employees International Union (SEIU) president Mary Kay Henry.
The company asked corporate headquarters employees to work from home in anticipation of the protest. The group of about 2,000 marchers were met at the edge of the property by dozens of police, many of them in riot gear. By bringing the fight to the company’s doorstep, workers and organizers are escalating a conflict that has built steadily over the past year and a half. Fast food workers at McDonald’s and other chains have been going on strike to demand $15 an hour and union rights since late 2012. Since then, the strikes have spread from New York City to 150 U.S. cities across all regions of the country.
Fast food workers earn 1,200 times less than what the CEOs get paid, the widest disparity of any American economic sector. McDonald’s employees make about $8.25 per hour on average before taxes, and the corporation tacitly acknowledges that it pays poverty wages. The company drew flak last year for a website that advised its employees to budget by spending nothing on keeping their homes warm, finding a place to live that costs less than $600 a month, and getting health insurance for just $20 per month. Even that advice was predicated on McDonald’s workers getting a second job. (McDonald’s eventually took the website down because it was drawing “unwarranted scrutiny” from outsiders.)
McDonald’s reported net profits of $5.6 billion in 2013. The campaign has drawn greater scrutiny to business practices at McDonald’s and in the broader fast food industry. It turns out that 90 percent of fast food workers report getting cheated out of even the low wage they are supposed to be paid, as managers edit their timecards or require off-the-clock work. Such wage theft allegations have led to a wave of landmark class-action lawsuits against not just McDonald’s franchise owners but the corporation itself.
The protests have also called attention to how the public pads fast food profits. Even without spending a nickle in a McDonald’s, anyone who pays taxes is subsidizing the company’s poverty wages. McDonald’s employees need over a billion dollars each year in public assistance money just to get by. Overall, low-wage workers cost the public a quarter-trillion dollars per year in anti-poverty spending that would not be necessary if these highly profitable companies committed to paying wages that would allow a full-time worker to stand on her own feet.