Podemos ('We can') is a left-wing party that surprised Spain by winning more than 1 million votes and five seats in the European Parliament elections last month, a mere four months after being founded. Physicist Pablo Echenique is one of those elected. 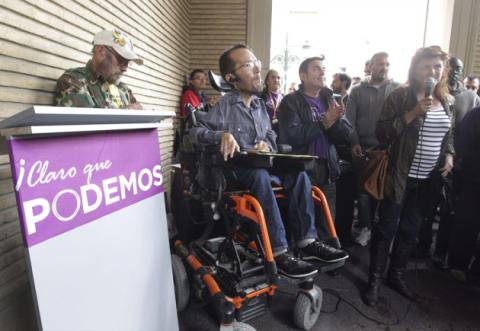 Pablo Echenique, centre, at an electoral rally for the upstart political movement Podemos, which he is now representing as an MEP., EPA/Alamy

Pablo Echenique has an unusual profile for a newly elected Member of the European Parliament (MEP). The Argentinian-born Spaniard is a researcher in chemical physics at the Spanish National Research Council in Zaragoza (CSIC), and until six months ago had no plans to run in elections.

Echenique is one of the few MEPs with a disability — in his case, spinal muscular atrophy. He is part of Podemos ('We can'), a left-wing party that, a mere four months after being founded, surprised Spain by winning more than 1 million votes and five MEPs in the European Parliament elections last month. Some portray the party as a populist group, and others as a challenger to the country's staid political system.

Echenique, 35, whose research focused on hybrid classical–quantum models, is also a contributor to a blog that deals with disability with a humorous twist. Here, he speaks to Nature about his party's plans, centralizing European research and transgenic organisms.

What is your field of research?
I work on computation models of organic molecules that mix classical and quantum physics. One of my main results was a model I developed with colleagues in 2008, which is a competitor to the most popular model in the field.

How has your disability affected your research career?
Positively. I have no sporting hobbies, so I have had more time to read and study. I have not experienced discrimination in the scientific world. The state in Spain discriminates against people with disabilities because it does not provide enough resources to fulfil their needs — but individuals are willing to help, most of the time.

Why did you enter politics?
I was indignant because in Spain and other countries there are growing numbers of poor people, while we see more and more millionaires and politicians involved in corruption cases. That is what spurred me to join Podemos. I won in the party's primary elections for the European Parliament, thanks to the support of the people in [Zaragoza] and the popularity of my blog. The MEPs from Podemos have not had much time to make plans in the last few months, and I feel a sense of vertigo because I am taking on a big responsibility. But I don't think that other MEPs are more prepared than us.

Do you plan to keep doing science while you are a Member of the European Parliament?
It is impossible — I will have to take leave. Podemos MEPs have committed to limit our stay in the Parliament to a maximum of two mandates. I see this political experience as an act of responsibility, but I prefer science.

Did Spain's budget cuts to science influence your decision to run for the European Parliament?
My concerns are more general. I think that science is essential for a developed country, and Spain needs a powerful, public, high-quality system. My salary was cut, like those of many other scientists. But before making last-generation medicines or high-temperature superconductors, people need to eat. We need to fix the disaster of research and development [funding] in Spain, but I am more concerned about people who cannot pay to heat their homes. Science funding is often justified by saying that we should invest in research because it is profitable: this argument scares me a little. For example, investing in disability is not profitable, but it is still necessary. That argument is correct, but profitability should not be the only objective. Knowledge should be supported for its own sake.

Podemos’s electoral programme makes very few proposals about research and development. Should it have done more?
We drafted the programme in a collaborative fashion. This is a good method of developing a programme, but it can have imperfect outcomes if it is done in short time, as we did. Now we have set up new circles [Podemos is organized in working groups called 'circles'] devoted to science, to correct the shortcomings of the programme before the next round of elections in Spain. I am strongly committed to improve Podemos’s proposals on science. Our main objective is to bring Spain up to the European average in terms of science funding. We want a homogenous system for science in Europe, not one in which northern European countries are specialized in science and technology and southern countries in services like tourism. We are aware that the current majority in the European Parliament is not committed to this vision. However, we hope that we can at least set an example of another way of doing politics, by being honest, cutting Podemos’s MEP salaries by three-quarters, limiting the number of mandates, and informing citizens about what lobbies do in the Parliament.

Podemos’s programme states that genetically modified organisms (GMOs) should be banned in Europe. Do you stand by this position?
I opposed that part of the programme, but it was approved by Podemos's majority. I think this point should be improved, and I will not support something as simplistic as banning GMOs altogether. I think that GMOs are not bad in and of themselves. There are people on the left with anti-scientific positions, just as there are on the right. However, sometimes scientists naively think that there are issues that don’t have a social dimension, and that only they — not the majority of people — are qualified to establish policies on these issues. GMOs have social and economic dimensions as well as scientific ones: for example, companies that monopolize technologies and that are unethical towards farmers.

Do you have specific proposals regarding disability?
Travelling on an aeroplane is a nightmare for a disabled person. You are forced to leave the wheelchair — which is stored away and might get damaged during the flight — and you are forced to stay in uncomfortable seats. I think that there may be some consensus in the European Parliament towards changing the regulations to avoid this.

Michele Catanzaro is a freelance writer based in Barcelona with a PhD in physics.