This is a precedent setting agreement for the Twin City region, Minnesota and even the nation. Many of the workers affected by this new deal with Target represent a segment of the work force that has often been considered “unorganizable.” Language barriers and use of immigration status to threaten workers have all been contributing factors in explaining the difficulty in organizing vast segments of low-wage workers in the United States. 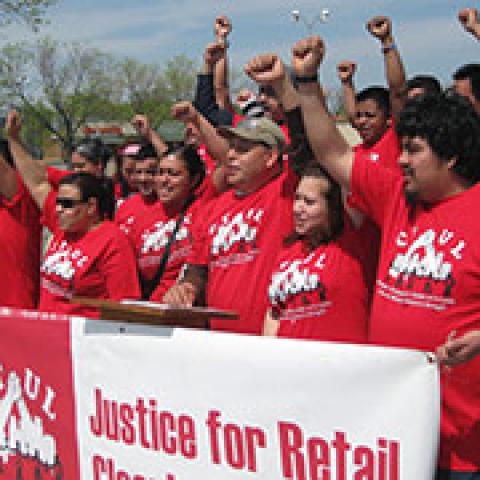 After four years of struggling for fair working conditions, workers who clean local Target Stores and organizers from the Centro de Trabajadores Unidos en la Lucha (CTUL), announced a breakthrough policy agreement that will be implemented between Target and the companies it sub-contracts to clean its stores.

This victory for workers comes after a long and arduous struggle. The sub-contracted janitors at local Target stories have faced poverty wages, rampant wage theft, and health and safety hazards for years. In cooperation with CTUL, workers have led three strikes against cleaning companies. Their organizing efforts pushed Target to the bargaining table. Over the last year the cleaning companies have been in dialogue with the Target Corporation. In the face of this sustained pressure, Target has agreed to unprecedented contractor policies that will provide significant protections for workers.

“This is the first policy of its kind in the retail janitorial industry,” explained Veronica Mendez, co-director of CTUL, in a news release. “It’s a victory not just for the estimated 1,000 retail janitors in the Twin Cities, but for all the low-wage workers of color fighting for a place at the table in deciding the future of work.”

The new agreement will be implemented with new contracts in the Twin Cities area and will ensure that workers rights’ are protected. The workers do not work directly for Target.

The agreement stipulates that before signing new contractors, sub-contracting companies must seek a labor peace agreement with CTUL and a local affiliate of the Service Employees International Union (SEIU), which will co-represent sub-contracted janitorial workers. Among a host of benefits for Target, sub-contracting companies and employees, labor peace agreements will allow employees to exercise their right to unionize without intimidation or coercion from employers, prevent undue delays in unionization, and ensure a just democratic process for new organizing. This deal should remove many of the insurmountable barriers that often block organizing drives among low-wage sub-contracted workers.

In a recent letter to Mendez provided by CTUL, Target Chief Human Resources Officer Jodee Kozlak said the new contract language will be included in service agreements that will be entered into in the coming months.

According to Mendez, of the roughly 1,000 retail janitors in the Twin Cities metro region, 150-200 work in Target stores. Others work in stores like J.C. Penney, Home Depot, Kohl’s, and Sears. CTUL has not made contact with those employers, but they are hopeful that such stores will follow Target’s lead. If not, we will likely see future protest actions by janitorial workers at other local retailers.

This is a precedent setting agreement for the region, the state and even the nation. Many of the workers affected by this new deal with Target represent a segment of the work force that has often been considered “unorganizable.” Language barriers and use of immigration status to threaten workers have all been contributing factors in explaining the difficulty in organizing vast segments of low-wage workers in the U.S.

The difficulty in organizing this population of workers has been compounded by dramatic changes in labor market institutions over the last few decades. The rise of independent contracting has led to a situation in which many once unionized workforces are excluded from most labor law protections. For example, independent contractors, such as port truck drivers, cannot organize because they are classified as independent contractors, despite close ties to a company through vehicle leasing arrangements, insurance or dispatch systems. Ultimately, these workers bear the operational costs, while large trucking and shipping companies avoid the costs of traditional employment arrangements.

In the face of such dramatic changes in the labor market, worker centers such as CTUL have found creative ways to organize, support and advocate for workers. According to Rutgers University Professor Janice Fine worker centers frequently offer three primary services. First, they provide direct service delivery by offering services such as free legal consul in the face of wage theft. Second, they provide advocacy for workers by publishing reports on working conditions in a particular industry for example. Third, they provide organizing support by teaching workers leadership skills to organize their co-workers among other activities. Through a mix of these support systems, worker centers across the nation such as the Restaurant Opportunities Center of New York (ROC-NY), the New York Taxi Drivers Alliance and CTUL provide a model of how to support workers in precarious working arrangements.

CTUL’s historic victory is an example of how these innovative new models of organizing can improve the lives of hundreds of workers in the Twin Cities region and lay the foundation for unionizing workers once deemed unorganizable.

Lucas Franco is a PhD student in political science at the University of Minnesota. Before moving to Minneapolis, Lucas worked as a research analyst for Unite Here Local 8. This post first appeared on the Minnesota 20/20 website.