The “Schedules that Work” bill (introduced by Representatives George Miller and Rosa DeLauro and Senators Tom Harkin and Elizabeth Warren) is the proletarian answer to the workplace “flex” policies that are common in corporate offices. After all, poor parents need flexibility more than anyone, as they cope with the chaos of economic hardship and work unstable jobs with few benefits.. 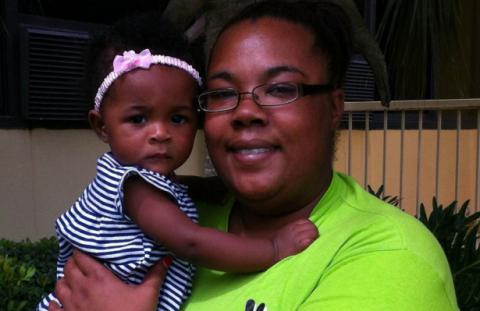 Tiffany Beroid, a member of OUR Walmart, maintains Walmart retaliated against her by cutting hours after she requested a schedule change.,Courtesy of OUR Walmart

The recent reports of moms getting arrested for leaving their kids unattended while they work or go to a job interview shows the reality of “work-life balance” when you’re living paycheck to paycheck. The burden for many low-wage hourly workers isn’t seeking balance, it’s walking a tightrope. Millions of workers have nonstandard schedules, irregular shifts or on-call jobs without set hours, so they scramble from shift to shift, from daycare to night classes, or anxiously call in each day in hopes of getting a few hours of work. Having no control over your work schedule means your boss controls not only how much you’re paid but how much time you spend with your kids.

Labor advocates are calling for workplace policies that give workers more stable schedules and more control over their hours. Now Washington may step in with legislation to check the volatility of the daily grind.

The “Schedules that Work” bill (introduced by Representatives George Miller and Rosa DeLauro and Senators Tom Harkin and Elizabeth Warren) is the proletarian answer to the workplace “flex” policies that are common in corporate offices. After all, poor parents need flexibility more than anyone, as they cope with the chaos of economic hardship and work unstable jobs with few benefits..

The bill provides workers a so-called “right to request,” or the ability to engage in a dialogue with their boss about a schedule change ahead of time, without fear of retaliation. In some cases, the employer would be mandated to accommodate a family or medical issue. Shift and on-call workers in some low-wage industries would also gain protections against arbitrary schedule changes.

Middle-class professionals may regularly negotiate work time through flexible work arrangements, generous paid leave time and telecommuting options. But in industries like retail chains or fast food, where “just in time” production systems require round-the-clock processing and sales, part-time and shift workers struggle between not getting enough hours to earn a living wage, and having to work whatever shift their manager dumps on them at any hour. Survey data shows that about half of hourly wage workers lack control over their work schedules.

Unless they can persuade their boss to accommodate their needs, a volatile schedule can destabilize their family lives. Parents struggle to find last-minute babysitting arrangements to take a shift, or they may be unable to enroll in a regular daycare that requires up-front monthly payments, since their income varies week to week.

A punishing work schedule derailed Tiffany Beroid’s whole career path. She was trying to hold down a full-time position as a customer service manager at a Walmart in Maryland, while studying to be a nurse. But when she asked for a schedule change to allow her to juggle her school and work duties, she tells The Nation, the management was less than family friendly: “[Walmart] retaliated by cutting my hours. So even though I was full-time in the system, I was receiving nineteen or twenty-five hours some weeks, maybe forty hours if I was lucky, once a month.”

Her situation was further complicated by her pregnancy, which caused blood pressure problems that prompted her to request light duty at work—on her doctor’s advice. Then, she says, the management abruptly forced her to take unpaid leave, and the strain on her family eventually forced her to drop out of school.

Under the Schedules that Work Act, workers like Beroid would be entitled to a schedule change if their request related to health, family caregiving duties, another job they are working or an educational or training program. The employer could refuse for “bona fide business reasons,” according to an analysis by think tank Center for Law and Social Policy (CLASP), but they would in any case have to consult with the employee “in a timely, interactive process.”

Workers in certain industries where shift work is prevalent—restaurants, retail and building cleaning—would be entitled to least two weeks advance notice of their schedule. Employers would pay an hour’s wages for each shift change without twenty-four hours’ notice. If a worker shows up for a shift and is sent home early—say, because business is slow—she can get compensated for at least four hours of wages. On-call workers, who are required to check in to confirm their schedules, also get an hour’s pay if they call-in but get no work.

But as with many labor protections geared toward low-wage workers, enforcement is a sticking point. Labor advocates say workers may face retaliation for merely requesting a schedule change.

After Beroid dropped out of school, for example, Walmart dropped her. She had become involved with OUR Walmart, a national union-backed organization that advocates for a fairer and more family-focused scheduling policies. Following months of campaigning, the company reformed its workplace policies in March to provide greater accommodations, including light duty, to women with pregnancy complications. But Beroid barely had a chance to savor the victory before she suddenly lost her job—she suspects, because of her activism. (Beroid says she has filed a complaint of unlawful dismissal with the National Labor Relations Board. Walmart, which has denied previous charges of retaliation against activist employees, states via e-mail that she “was dismissed from the company because she didn’t always show up for work when she was scheduled”).

Beyond Walmart, Beroid says, the federal legislation would give workers a mechanism so employers can be held to account. “Even though Walmart has made these changes for the public’s eyes, if they’re not enforcing them, I know if the bill was actually to take effect, then they would have to follow these rules and enforce these policies.”

CLASP policy analyst Liz Ben-Ishai says via e-mail that since enforcement is generally driven by individual workers’ complaints, taking legal action against a boss would be hard for “low-wage workers without support or resources, who fear retaliation.” But the Labor Department could “proactively enforce” fair-scheduling policies, by undertaking “targeted investigations of companies that are, for example, known to violate other laws and therefore more likely to be in violation of this one.”

The legislation parallels “right to request” policies that have already passed in San Francisco and Vermont. San Francisco workers. And several states, including New York and California, have “reporting time” laws that guarantee a certain minimum pay for shift workers if their hours are suddenly cut. Some companies have individually instituted flexible scheduling practices, as studies have shown this can improve workplace productivity and limit turnover.

Research by Susan Lambert of the University of Chicago’s School of Social Service Administration shows that among early-career workers, aged 26 to 32, overall nearly 40 percent “know their work schedule one week or less in advance.” Workers of color are more likely to work on such short notice. About three in four hourly workers reported experiencing unstable schedules in the past month, and “[p]art-time employees, skilled tradesmen, and workers in low-status occupations are particularly likely to know their schedule at most a week in advance.” And lost time is lost income: hourly workers with unstable schedules reported that “their hours vary by what amounts to about 50 percent on average of their usual work hours.”

There are many other legislative solutions that advocates are pushing to make wage work more family friendly and sustainable for poor households. Paid sick days policies, which have been introduced or enacted in several states and cities, allow workers to attend to medical needs without losing wages. Stronger social support programs, such as public childcare and pre-kindergarten, along with a higher minimum wage, would also provide more financial bandwidth to cope with precarious jobs.

But regardless of how much they make per hour, scheduling stability is key to economic stability, especially for the growing number workers who work insecure jobs, lack basic benefits like healthcare or do not have a union to represent them.

Beroid still campaigns with OUR Walmart to make sure it upholds its new policies. “There’s a lot of associates in the store who are afraid to speak out,” she says, despite the reforms. “So there’s a lot of women, whether they’re single or married, that are trying to provide for their children, trying to work with the way Walmart gives them schedules, of going to work late at night, being back to work early in the morning, not able to provide childcare.”

As her daughter nears her second birthday, Beroid plans to go back to school. And she’d like to return to Walmart, too, once her boss is ready to offer a real work-life balance—one that lets her set her own priorities.