Protest rallies in Oakland, California and Tel Aviv highlight sharpening demands for an end to Israeli military action against Gaza and for a Palestinian homeland. 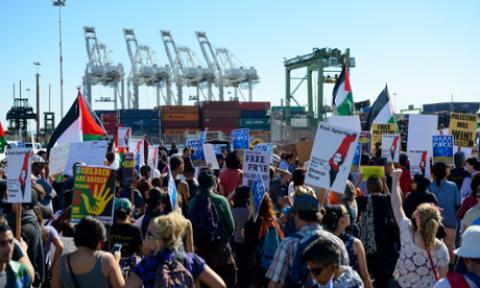 Pro-Palestinian protesters at the port of Oakland attempt to prevent an Israeli ship from docking. , Justin Benttinen/The Guardian

Israeli Ship Remains at Sea as Thousands of Protesters Gather in Oakland
Rebecca Bowe at the Port of Oakland
The Guardian
17 August 2014
http://www.theguardian.com/world/2014/aug/17/israeli-ship-remains-at-sea-thousands-protesters-gather

An Israeli ship that was scheduled to dock at the port of Oakland in California on Saturday remained at sea as between 2,000 and 3,000 pro-Palestinian activists streamed towards the port entrance, chanting and waving flags.

The protesters intended to form a picket line to prevent work crews from unloading the ship.

Activists had originally planned to meet at 5am for a blockade of the Zim Integrated Shipping Services vessel, but word that its arrival had been delayed prompted organisers to push the protest back until later in the afternoon.

The event began with a brief rally at a nearby transit station, followed by a march to the port. Sameh Ayesh, a 21-year-old Palestinian activist with the San Francisco-based Arab Youth Organisation, led the crowd in a chant.

But before the march had even reached the port entrance, an activist who identified himself as Eyad delivered word that the Zim vessel would not be docking that day. An online ship tracking service showed that the vessel was off the coast of California, closer to Santa Cruz, as the march got under way.

Activists interpreted the delay as a victory since the schedule change seemed to have been made in response to the planned pickets. “We have stopped the Zim Piraeus from docking on the west coast of the United States,” said Eyad, of the Arab Resource and Organising Center (Aroc), into a megaphone, drawing cheers from the crowd as the march came to a halt on a bridge leading towards the docks.

“Zim Lines is the largest Israeli shipping company, and it’s a huge flow of capital for the state of Israel,” said Lara Kiswani, executive director of the centre, whose organisation was one of 70 to take part in planning the blockade. 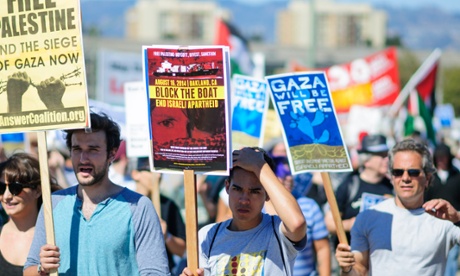 Pro-Palestinian demonstrators approach the port of Oakland in an attempt to prevent an Israeli ship from docking. Photograph: Justin Benttinen/The Guardian

Kiswani said the action was meant to generate momentum for a broader campaign calling for boycott, divestment and sanctions against the Israeli government as a response to violence in Gaza. “With the recent attacks on Palestine … there’s been a lot of discussion locally, particularly with Aroc, on how to escalate our tactics,” she said.

A similar blockade against a Zim vessel took place in 2010, when pro-Palestinian activists formed picket lines in response to Israel’s attack on a flotilla ferrying humanitarian outreach workers to Gaza. “After the flotilla was attacked by the state of Israel, we successfully were able to block the Zim Lines ship here, with the ILWU,” Kiswani said. “So for years we were working with ILWU, with rank and file, and with the leadership, to try and raise awareness about the plight of Palestinians.” In 1984, she added, “ILWU took a position against apartheid, and the workers refused to unload that ship”.

As the march reached the port entrance, where activists had originally planned to stage a picket, they encountered a line of police officers standing in formation. Protesters erupted into chants of, “hands up, don’t shoot!” – echoing chants sounded in response to police violence directed against street protesters in Ferguson, Missouri, in the wake of the fatal police shooting of 18-year-old Michael Brown.

Several others made statements linking recent acts of police brutality with the conflict in Gaza. “On Twitter, we’ve seen people in Gaza tweet to protesters in Ferguson how to cope with teargas,” said Mohamed Shehk, who helped organise the blockade with the Oakland-based nonprofit Critical Resistance. “They’re saying things like, ‘as Palestinians, we know what it’s like to be targeted and killed for being of the wrong ethnicity’.”

The Guardian is seeking comment from the port of Oakland and the Zim shipping company.

Thousands of demonstrators gathered Saturday evening for a pro-peace rally in Tel Aviv under the slogan, “Changing direction: toward peace, away from war.”

The rally at Rabin Square comes two days after another demonstration expressing solidarity with residents of communities along the Gaza border.

Right-wing activists planned a counter-demonstration, which will be held nearby at the same time. The Israel Police is planning to keep the two camps apart.

At the main rally, which began at 8 P.M., speeches were slated to be made by author David Grossman, journalist Zuheir Bahloul, Meretz chairwoman Zahava Gal-On, Hadash chairman Mohammed Barakeh, a resident of Sderot, a representative of bereaved families and other left-wing activists.

The rally was originally due to take place last week, but was postponed at the request of the police and the Home Front Command, which prohibited gatherings of more than1,000 people at the time in the Tel Aviv area.

The event's Facebook page states that, “following a painful month of war and death, in view of waves of incitement and hatred that are tearing apart Israeli society, we call for a demonstration for peace and democracy. The next round (of violence) can be avoided. We don’t have to sink into an abyss of ever-crueler wars, of extreme hatred and a destruction of our neighbors and ourselves.

"Only an agreement will ensure long-term security and quiet for residents of the south and of the entire country. There is another way – immediate dialogue with Palestinians to ensure a fair peace, the opening of Gaza and a determined stand of Arabs and Jews against racism and for life. Only a two-state political solution will guarantee independence, justice, security and hope for all people living in this land.”

Speaking at the demonstration, Meretz chairperson Zahava Gal-On lashed out at Prime Minister Benjamin Netanyahu, saying, he has failed miserably, not as a result of this operation, but of refusing for five years to take the diplomatic path to peace.

Gal-On accused the prime minister of a "diplomatic freeze: refusing to adopt the Arab Peace Initiative; the so-called blowup of the talks with (Palestinian President Mahmoud Abbas) Abu Mazen after 9 months, the breakdown of U.S.-Israel relations, the refusal to recognize the Palestinian unity government, and the widely authorized building in the settlements, which destroyed any chances of a peace agreement with the Palestinians.”

She continued, “You could have achieved the framework you’re willing to accept now without paying the price of 64 dead soldiers and civilians, the death of 2,000 Palestinians, and the horrible destruction in Gaza, including almost half a million people uprooted from their homes.”

During his speech, author David Grossman, said “Neither side in this war has a victory picture. There are only indescribable images of death and destruction. Every image depicts defeat for both peoples.

Many streets in the area were closed during the rally.