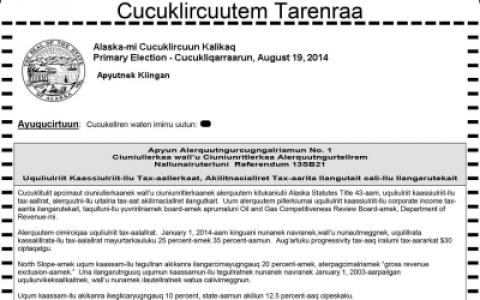 A sample ballot translated into Yup'ik. , State of Alaska Division of Elections

ANCHORAGE, Alaska — Ahead of tomorrow’s primary elections in Alaska, every voter in the state should have received a pamphlet that introduces the candidates, describes ballot issues and explains how to vote.

The pamphlets are available in Spanish and Tagalog — but not Yup’ik, a language spoken by Alaska Natives, even though it is among the most commonly spoken languages in the state.

At least 10,000 people speak Yup’ik, according to the Alaska Native Language Center at the University of Alaska at Fairbanks. It’s the second-most-spoken Native language in the U.S., after Navajo. Many speakers live in the community of Bethel or surrounding smaller rural villages in southwestern Alaska.

When Yup’ik-only speakers get to the voting booth, they may request a Yup’ik sample ballot, which can also be read to them. Though the translation may be technically correct, it may be in an unfamiliar dialect or so dense and convoluted that, some Alaska Native leaders say, older Natives in particular will feel they are voting blindly. The ballot they mark will be written in English.

“There are gaping holes in the availability of election materials for these voters,” said Natalie Landreth, a lawyer with the fund. “The end result is many of them do not understand what they are voting for.”

U.S. District Judge Sharon Gleason told the parties in June that federal law requires Alaska to match English election information with election information translated into Yup’ik as well as several other Native languages. A trial was subsequently held to decide whether the state’s language program meets the federal standard Gleason outlined. If she finds it does not, she will stipulate how the state must change its election procedures. An imminent decision is expected.

Lawyers for the state officials say Alaska already makes a substantial effort to assist Native-language speakers and meets federal requirements to take “all reasonable steps” to make sure Native voters are informed and can participate in elections. It provides bilingual poll workers, touchscreen voting machines with Yup’ik audio, a language-assistance phone number, Yup’ik public service announcements, translated ballot measures and candidate statements and other materials that are distributed to tribes.

“We’re doing everything we can to provide language assistance that is appropriate,” said Margaret Paton-Walsh, Alaska’s senior assistant attorney general.

But, she said, providing assistance to Native-language speakers is fraught with “special problems” because of the nature of the languages.
‘The best way to describe it is Yup’ik legalese, or Yup’ified English. The end result is that it is a struggle even for a native speaker like myself to read and understand this.’

Native languages are traditionally oral. The written forms were developed by Moravian and Catholic missionaries in the late 19th and early 20th centuries and then changed again in a university setting in the 1960s. Secondary education was not available to Native people in many villages until courts required it in the 1970s. For those reasons, segments of the non-English population who are over 50 are illiterate in their own languages. It is estimated that half of Yup’ik speakers can read and write in Yup’ik, according to the University of Alaska at Fairbanks. The number of Yup’ik speakers who cannot speak English or read Yup’ik is unknown.

Communication about elections with Yup’ik-only speakers who do not read is doubly hard, Paton-Walsh said.

Another confounding factor for the state is that those needing the most assistance are spread over vast areas, she said. There might be 170 people spread over a stretch of country the size of Montana, she said. Finding Yup’ik-speaking poll workers can be done because the language is common, but other languages are more difficult to cater to. Only about 300 people speak Gwich’in, for example, she said.

Furthermore, ballot measure language can be difficult to understand even in English.

“It’s hard when you get a measure like the [tomorrow’s] oil tax referendum. It is almost completely impenetrable in English,” she said, “and I say that as a lawyer.”

A panel of Yup’ik speakers worked hard to provide a translation for the ballot measure, but it was no easy task, Paton-Walsh said.

Walkie Charles, a native Yup’ik speaker and language professor at the University of Alaska at Fairbanks, was asked by the plaintiffs to look at Yup’ik translations of ballot measures from 2010 and 2012. He found a persistent problem with clarity.

“It took me more than 30 minutes to review one ballot measure,” he wrote in his findings.

With that measure, related to public corruption, he used an English version to see if he could discern the Yup’ik. That is when he realized it had been translated literally, word for word, without regard for how the language is spoken.

“The best way to describe it is Yup’ik legalese, or Yup’ified English,” he wrote. “The end result is that it is a struggle even for a native speaker like myself to read and understand this.”

Charles believes translations should focus on clarity of concepts rather than word-for-word translation and should use comparisons to help speakers understand.

“If we are going to make it correct, it has to have some story in it or some kind of narrative,” he said.

He also had a hard time with a ballot measure relating to parental consent for abortion. The translation to him seemed very dense, and it did not use “pilagturluku qingaa arulairtelluku,” the term he was most familiar with for “abortion.” Instead it used “qingairpailgan,” which he read as “before she is pregnant.” So initially he thought the measure was asking people to vote on whether parental permission should be required for a young woman to become pregnant, he said.

He later discovered the translation was correct but used a different dialect from the one he was raised speaking. He said translations should also include footnotes for dialect differences. The members of the state’s Yup’ik translation panel, he noted, all speak the same dialect.

“We have to find that happy medium by which to make best sense of the context,” he said.