Nobody in their right mind wants more violent protests. But, as Martin Luther King said, ‘a riot is the language of the unheard’. 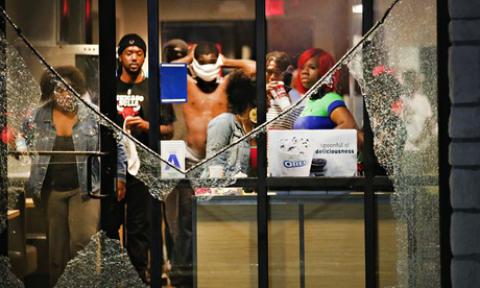 Protesters take cover in a McDonalds with smashed windows. ‘People have a right to resist occupation, even if we don’t agree with every method.’ ,Scott Olson/Getty Images

In 1966, Martin Luther King started to campaign against segregation in Chicago only to find his efforts thwarted by violent mobs and a scheming mayor. Marginalised by the city’s establishment, he could feel that non-violence both as a strategy and as a principle was eroding among his supporters. “I need some help in getting this method across,” he said. “A lot of people have lost faith in the establishment … They’ve lost faith in the democratic process. They’ve lost faith in non-violence … [T]hose who make this peaceful revolution impossible will make a violent revolution inevitable, and we’ve got to get this over, I need help. I need some victories, I need concessions.”

He never got them. The next year there were more than 150 riots across the country, from Minneapolis to Tampa.

As the situation escalates in the St Louis suburb of Ferguson, Missouri, where police recently shot an unarmed black man as he walked down the street, many are clearly losing faith. As the first day of curfew drew to a close, hundreds of police in riot gear swept through the streets, using tear gas, smoke canisters and rubber bullets against an increasingly agitated crowd. Earlier this morning the governor, Jay Nixon, deployed the national guard.

Protesters insist the police action was unprovoked. Police say it followed shootings, firebombs, looting and, crucially, an attempted attack on the area they are using as a command centre. Ronald Johnson, the Missouri highway patrol captain drafted by the governor to take over security in the town and calm the situation down, blamed “premeditated criminal acts”. Late last week, Johnson was the darling of the crowds as he expressed sympathy with their cause and frustration with the tactics of the local police department. Now the situation seems polarised once again.

Johnson said the attacks were clearly provocations against the police. “We had to act to protect lives and property,” he says. In a statement explaining his deployment of the national guard, the governor, Jay Nixon, blamed “deliberate, coordinated and intensifying violent acts”.

“Tonight,” he said. “A day of hope, prayers and peaceful protests was marred by the violent criminal acts of an organised and growing number of individuals, many from outside the community and state, whose actions are putting the residents and businesses of Ferguson at risk.”

Such statements ignore the nature, scale and source of the problem. When an 18-year-old is shot in daylight for walking down the middle of the street holding his arms up; and when his shooter is whisked out of town by the state, then the residents of Ferguson were clearly already “at risk” from those who would commit “premeditated criminal acts”. What could be more “deliberate” and “coordinated” than releasing a video that claims to be of Michael Brown stealing cigarillos the same day the police finally release the name of the policeman who shot him, when the alleged theft had nothing to do with the shooting. (Even if it had, since when has the charge for shoplifting been summary execution?)

According to a preliminary autopsy, Brown was shot six times including twice in the head. Dr Michael Baden, the former chief medical examiner for the City of New York, who performed the autopsy at the request of the family, said: “In my capacity as the forensic examiner for the New York State Police, I would say, ‘You’re not supposed to shoot so many times.’ Right now there is too little information to forensically reconstruct the shooting.”

For some then the police have come too late to the notion that they are there to “protect” lives. “The law,” wrote James Baldwin, “is meant to be my servant and not my master, still less my torturer and my murderer.” Those who call for law and order now must understand that there is no order because men with badges have been acting lawlessly.

As I wrote after the riots in London three years ago: “Insisting on the criminality of those involved, as though that alone explains their motivations and the context is irrelevant, is fatuous. To stress criminality does not deny the political nature of what took place, it simply chooses to only partially describe it. They were looting, not shoplifting, and challenging the police for control of the streets, not stealing [policemen’s] hubcaps. When a group of people join forces to flout both law and social convention, they are acting politically.”

For good reason, the nature of such rebellions troubles many. They attract opportunists, macho-men and thrill-seekers as well as the righteously indignant and politically militant. Resistance to occupation is often romanticised but never pretty. And Ferguson – a mostly black town under curfew in which the entire political power structure is white, with a militarised police force that killed a black child – was under occupation.

Riots are also polarising. They narrow the base of support for campaigns, sending potential sympathisers into the arms of the state, demanding a police crackdown. People ask: what could violent protest possibly achieve? It is a good question. But it only has any validity if they also question the nature of the “peace” preceding it. Those who call for calm must question how calm anyone can be in the knowledge that their son, brother or lover could be shot in such a way.

People have a right to resist occupation, even if we don’t necessarily agree with every method they use to do so.

As I also wrote, following the British disturbances: “One should not overstate the case: [throwing firebombs and shooting at police] are not the hallmarks of political sophistication. But then nor are riots. They are the crudest tool for those who have few options. By definition, they are chaotic. Rich people don’t riot because they have other forms of influence. Riots are a class act.”

Nobody in their right mind wants more violent protests. But nobody wants more Michael Browns either. And those two things – the violence of the state and the violence of the street – are connected. “A riot,” said Martin Luther King, “is the language of the unheard.” The people on the streets don’t donate thousands of dollars to anyone’s campaign. They don’t get a seat at any table where decisions are made or have the ear of the powerful. But with four black men killed by the police in the country in the last four weeks, they have a lot to say, and precious few avenues through which to say it. The question now is who’s listening.